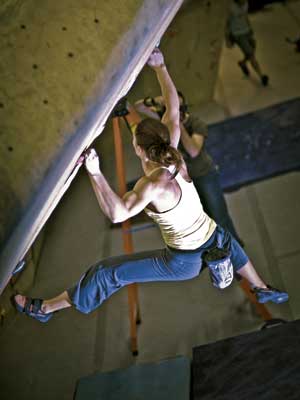 Erin Ford-Zielenewski, or Stubs as she’s known to her friends, is 5″ 2′ tall, but her potato-sized biceps supply more than enough power to keep her climbing and competing at an elite level. For the last five years she’s pulled down with the strongest and dynoed with the tallest.

Ford-Zielenewski is a Grade One teacher. Her inspiring smile, bright blue eyes and patient demeanour show that she’s always willing to listen, inspire and lead. In the classroom, on the rock and in competitions, Erin is a leader.

Since Ford-Zielenewski started climbing in 1995, she has tried competitions, bouldering, sport, traditional, deep water soloing, big walls and mixed sport/trad climbing. She says, “All types of climbing help me stay well-rounded and bring different strengths to each climbing style. (They) build up strength, mental focus and endurance.”

Ford-Zielenewski is best known, however, for her competition record. She has dominated the Tour de Bloc Bouldering Series in Eastern Canada, winning many local comps and has also made trips to the Nationals in Vancouver and Edmonton.  She has been nationally ranked in the top three for the past four years by the Climbing Escalade Canada Open National Bouldering Team. She has also cashed in thousands of Air Miles to make trips to Professional Climber Association Comps and American Bouldering Series Events all over the U.S..  Recently, she represented Canada at the World Cup event in Vail, Colorado, where she placed a respectable 20th overall in a stacked international field.

Although Ford-Zielenewski says winning the national title “would be nice,” it isn’t her only focus or goal. She’s having too much fun pursuing the different disciplines of climbing with equal vigour, sending traditional routes up to 5.12-, 5.13 sport-climbs and V8 boulder problems. She has climbed all over the world, from Kilimanjaro to the western U.S. and France. Many of her best sends are first female ascents of new routes put up by her husband, Dave, at Lion’s Head, including Gargamel and Azrael 5.12+ a bolted steep boulder problem leading to a long traditional crack.

Despite her notable ticks, Ford-Zielenewski is proudest of the volume and variety of her climbing. Most of her hardest routes were done quickly because she prefers focusing on experiencing more movements and lines over projecting. Wherever she is, her goal is to enjoy as many routes as possible and the best type of climbing available.

Dave is also a teacher and a climbing fanatic. The couple met in high school at the local climbing gym and has been inseparable ever since. Dave is a strong climber with achievements on par with Erin’s and he coaches and motivates her.  It is not uncommon to see the pair at the gym working a problem Dave has set to help Erin train for her next competition, or working the same route or boulder problem while discussing the beta as equals. They both admit that their friendly competition has helped them to push each other to their physical limits. Erin says “Climbing at similar levels has helped us train together to become stronger climbers.”

The teacher’s lifestyle has enabled the Zielenewskis to climb and travel extensively during their summers. The two often travel in their Silver Dodge Caravan, which is fully equipped with all the luxuries of home.  It appears that there are more travels their future.  They have saved their pennies for the past four years for a year’s sabbatical.  Their proposed itinerary includes Yosemite, Australia, Thailand, China, Greece and Spain. By dodging winter and climbing for 14 months, these two will achieve much, wherever they go.

Nicole Reeve is a member of the national climbing team. She lives in Toronto.