Bouldering has also become one of climbing’s most cosmopolitan disciplines. The scale of the terrain is smaller than for any other discipline and boulderers find quality climbing in the most surprising places. Today, many of the world’s most famous climbs are less than three metres high. Enjoying outdoor climbing without having to manage any equipment more complicated than climbing shoes still offers one of climbing’s greatest pleasures.

A survey of climbing media, however, shows that this unalloyed fun has been unnecessarily complicated. An ad for a defunct alpine magazine put the comment “where’s the boulder dude?” in the mouth of a moronic boulderer to illustrate the fact that he didn’t qualify to subscribe. The epithet “pad people,” the comparison of bouldering to video gaming, the implication that boulderers, despite spending weeks trying a single move, have short attention spans- the whole anti-bouldering media – is undercut by the central role of bouldering in the history of rock climbing. The pipe-smoking, tweed jacketed climbers of the 19th century honed their skills on the small rocks. In the 1960s and 1970s, intellectuals like John Gill and Bob Murray gave it a decidedly cerebral tone. On the tiny rocks of the suburban forest of Fontainebleau, Pierre Allain invented the smooth-soled rock shoe and the brave new footwork that went with it that he later unleashed on the north Face of the Dru. In his rock climbing days, Reinhold Messner built his strength traversing small cliffs. Authors of modern American big wall free climbing like John Bachar and Ron Kauk named their problems and pursued bouldering as an end in itself.

Canada, predictably, has shared in this tradition. Since I started climbing in Canada in the 70s, bouldering has always been a focus of practice, competition and fun. The Fireplace Wall at Rattlesnake Point has an overhang that juts out about a metre and cuts 15 m across the cliff at head height between two damp trad cracks. Three or four full length routes tackle the overhang and the vertical wall above, sprouting ancient ring pitons or bolts. In 1975, when I started climbing I was inspired by watching local hardmen Tom Gibson, George Manson and Dave Lanman piece together traverses from crimps above the overhang that bent fingers over backwards and made feet scramble on the greasy holds below. There were endless variations, and not always friendly one-upmanship in establishing new “eliminates” which, simply put, meant skipping holds.

My first climbing trip was to Val-David. It rained for two days and me and my partner spent the whole time camped below a boulder at Mont King. The granite slabs of the crag shone in the rain and we spent the weekend making tea on an alcohol stove and wearing out our fingertips on rough granite blocks too overhanging to be dampened by the rain.

On a fall night a few years later, my brother, Sig Isaac and me stopped at the first climbing area we came to in the West: the brown stones of Okotoks rock jutting out of a prairie grass field. We dug our canvas-topped shoes and damp chalkbags out of the trunk and spent a couple of hours on the problems, marvelling that the rock was finer than the Gunks. We threw our sleeping bags on the ground in the lee side of the stones, for there was no one around and we didn’t know a single person in Alberta. We went to sleep after excitedly discussing the fun that lay in store for us on local big walls like Yamnuska, which we assumed were made of the same stuff as Big Rock.

Boulders have always meant many things to climbers: a safe place for a bit of informal competitive climbing, a medium for increasing your strength, a less weather-dependant form of climbing than roped objectives or just plain shelter.

Bouldering was probably one of the very first types of rock climbing ever done in Canada.  It has always been the ideal activity for climbers who lack partners, equipment or time and for the pioneer of a new area, it gives a taste of the climbing on the bigger outcrops without a commitment. The first areas were therefore explored by city-bound climbers or pioneers searching for cliffs. 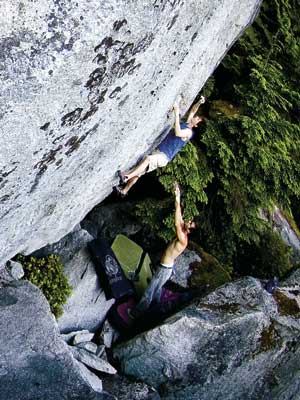 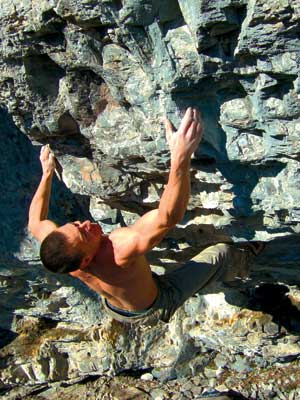 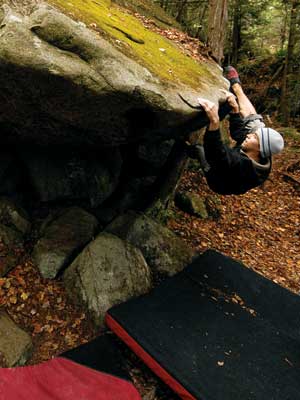 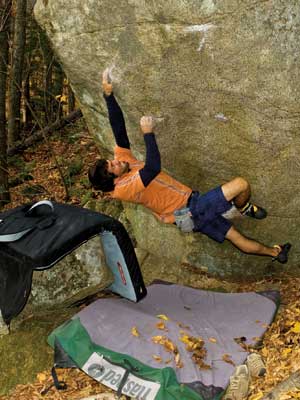 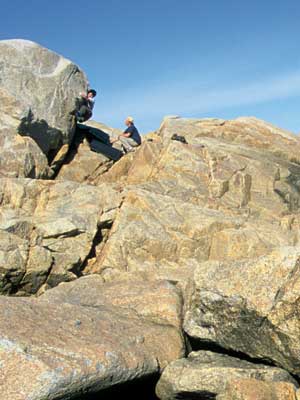 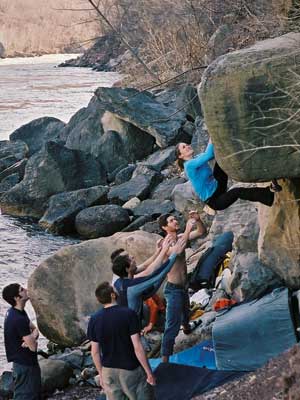 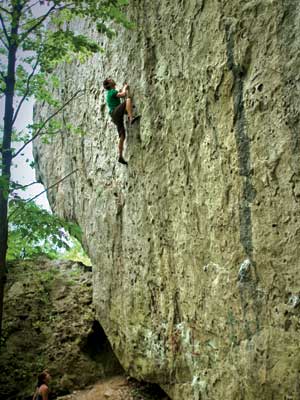 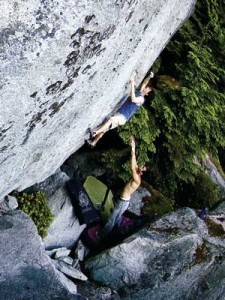 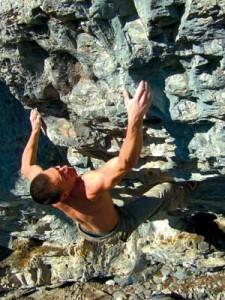 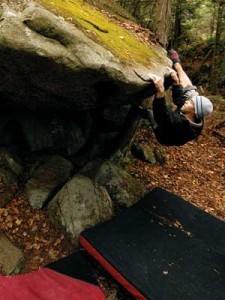 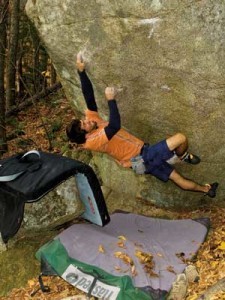 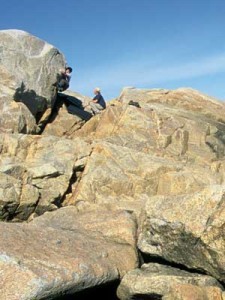 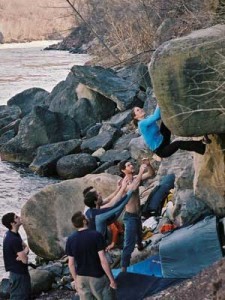 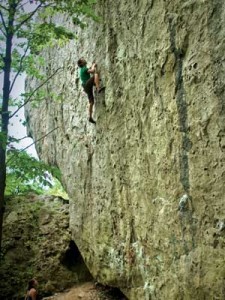 This process was already well established in Canada. A 1940s photo shows Roger Neave climbing one of the huge limestone boulders beneath Lions Head. In the 1950s, Calgary climbers caught weeknight practice sessions at Okotoks and other erratics around the city after work to hone their rock skills.  Squamish’s Kacodemon boulders provided 1950s climbers with a place to practice aid climbing for the California big walls they later mastered. In the east, where the difference in length between boulder problems and rock climbs was often not that great, locals traversed the bases of cliffs in Val-David, Quebec, and Niagara Escarpment as soon as they started climbing on them.

So, from the beginning, Canadian climbers saw bouldering as an impromptu mixture of opportunity, athletic skill and fun. Bouldering guidebooks and information on access and routes on the internet have broadened public knowledge, but the best way to learn about where to boulder is still by talking to boulderers.

The belief that bouldering is a preserve of climbing unsullied by sponsorship and publicity is strong in Canada.  Some top boulderers avoid being photographed. Some avoid being seen. The exploits of several of the best boulderers in Canada are known only by rumour and they refuse to be interviewed, despite the fact that many of their climbs would easily rate among the best yet made.

For these reasons, there is no profile of personalities of the best boulderers in Canada has ever been published. But, despite this passion for maintaining bouldering’s purity and despite the fact that you can do it on your own, bouldering is one of climbing’s most social disciplines. It’s the only form of climbing where you are literally caught in the hands of another climber. With some disdain, boulderers have been referred to as “pad people,” because they cluster around the pads below problems. But there’s a reason they do this.  Many low problems and sit starts would punish a falling padless climber with a very painful injury. On higher problems, pads give spotters something to direct a falling climber towards.

V-grades added a healthy bit of competitive fun.  If you don’t like them you can ignore them and besides, they’re only really relevant to those climbing towards the upper end of the spectrum. Also, they’re a good index of your improvement.

Bouldering has also become one of climbing’s most cosmopolitan disciplines. The scale of the terrain is smaller than for any other discipline and boulderers find quality climbing in the most surprising places. Today, many of the world’s most famous climbs are less than three metres high. Boulderers tend to defy all the traditional road trip routes, with Vancouverites travelling to Nova Scotia, Quebeckers visiting Ontario and Ontarians visiting everywhere.

What follows is a short introduction to the state of play, some training information, for different levels of bouldering, and a primer on where to find some of the best boulders in Canada. If you have been shunning the small rocks, think again. It’ll make you stronger, save you time on your quest to improve and provide the cheapest climbing thrills you’ll ever enjoy.