With his numerous wins at the junior World Cup competition wins, repeated podium finishes at World Cups as an adult and redpoints of hard routes like Dreamcatcher 5.14d, Sean McColl has emerged as Canada’s top rock climber. Earlier this year McColl bagged a series of difficult boulder problems including a V15 and later capped this accomplishment with his first World Cup victory. Vikki Weldon caught up with McColl and discussed his recent victory, the challenges of international competition and the benefits of living Europe.

Congratulations on your first World Cup win. Can you give some insight into the feelings you experienced upon learning you had secured the gold medal?

I thought I had climbed very well in the finals and felt like I could finish in the top three. When they said that I was in the lead with only one more climber (Jakob Schubert) remaining, I knew I was going to either repeat my best result (second place) or possibly win my first World Cup. Schubert looked solid as he climbed and I thought he would pass me. But when he eventually fell after a hard move in the roof, I knew I had won my first World Cup. Everyone around me was congratulating me and I knew I had achieved something special. I’ve wanted to win a World Cup for the past few years, but I thought my first win would be in bouldering. Instead, I have my first win in lead climbing and I can’t be happier.

In the past, your best competitive results have been in the Bouldering World Cups. How did you manage such an outstanding performance in the lead climbing discipline? Were you surprised to finally win a lead competition? 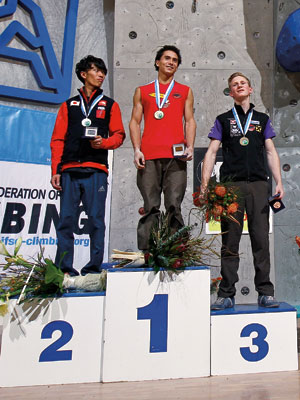 The Bouldering season was tough for me. In February, I went down to the ABS Nationals and came back with a win and an injured finger.  I didn’t realize it at first, but my training took a big hit. I was also finishing school, which also took a toll on my fitness. I started the World Cup season in Canmore and finished third. Although I was happy with that result, in the following World Cup events, I could feel myself becoming frustrated with my power. I wanted to be stronger and I knew that I hadn’t trained as hard as I could have. At the end of the bouldering season I turned to lead climbing. I’ve been a lead climber before and knew that my bouldering power would sufficient. So rather than focus on strength training, I concentrated on improving my resistance and endurance. If I could boulder for 30-40 moves, I’d be set. Longer than 40 moves was hard for me, even after training. But I felt very good in the 30-40 move range. Was I surprised at the win? – yes. At the same time, the route suited me and I fell after doing 35 moves, which is directly in my peak climbing zone. When the route is more like bouldering on a rope after 20 reasonably hard moves, I have a much better chance of beating those guys. My chances drop when the route is 60 moves long.

Not long before your win, you were taking down some impressive boulders in Switzerland, including Big Paw, your first V15. Do you feel this contributed to your success in the Kranj?

My trip to Switzerland directly contributed to my win in Kranj, but for different reasons than you would think. My Swiss trip helped me mentally. I knew I was strong and I knew I had endurance, but when you’re training in a gym, you have no perspective. I went to Switzerland to take a break from training before the world cup in Kranj. I was hoping to be able to climb some V12s and maybe work a V13, but when I got there I realized that my power and climbing ability were a lot higher than I had anticipated. And with Daniel Woods, Paul Robinson and Anthony Gullsten providing the perfect beta, I don’t have to spend 20 minutes figuring out a good sequence and wasting power. Instead, I could go directly into good flash attempts and then redpoint. For 10 days, I was bouldering in Switzerland and having an amazing time taking down some incredible lines. I knew my endurance couldn’t diminish in just 10 days and I knew my head would appreciate the break from training. When I got to Kranj, I felt the strongest I had felt in my life and it really showed.

Can you give the readers a little taste of the Swiss bouldering life?

Some of the other climbers weren’t morning people so I was usually up around 8 a.m. but waiting until 10 a.m. to get out the door. We would drive to Magicwood, Cresciano or Chironico and just climb all day. Temperatures ranged between 5 and 10 degrees C for most of the day which is prime for friction. At 5 p.m. the sun would go down so we’d head back to the house in Claro, make dinner, play cards, go on the internet, watch movies and chat. We would talk about our day, where we wanted to go the next day and generally just make fun of each other in a friendly manner. By midnight, most of us would go to bed and the cycle would repeat.

Besides that magic European air, what have you found to most benefit your climbing since moving into the European climbing lifestyle? 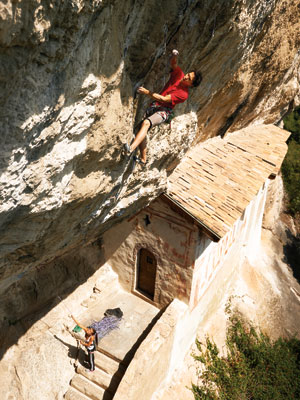 What are the benefits and challenges of a full-time climber lifestyle?

Benefits of being a full-time climber are that I can just focus on climbing; I can’t miss the bus for school, I don’t have a test next week, and I don’t have to report a boss at the end of the quarter. The challenges I guess would be the cost of living and constant travelling to comps. One of the biggest challenges is that I miss my friends and family. They can’t all come to every competition – this makes the trips back to Vancouver even more important. At the end of this 2011 season, after the last world cup in Barcelona, I’m going home for a month and a half. I can’t wait to talk and relax with my friends from Vancouver.

Can you compare climbing V15, 5.14d and winning a World Cup? Which is a more difficult achievement?

The most difficult is winning a World Cup. Between the V15 and 5.14d, I’m going to put their difficulty at par. Although 5.14d is lower in the grading system than V15, bouldering in all honesty, is a lot lazier.  Winning a World Cup is at the top of my list because it takes months of training just to make finals. After you make finals, there’s the podium and finally a win. With only around 10 World Cups per year, spread all over the globe, it’s very hard to win a World Cup. You have to be at the top of your game and also beat everyone else who are probably at the top of their game. You also need a bit of luck. To climb 5.14d, you usually need to train endurance as well as power. V15, you’re probably going to train power. With climbing outside, there’s no time restraint and there’s always another day. You can dial in the moves on the route or boulder and just piece them together.

What are your plans and goals for the upcoming year?

I’ll be planning some rock trips – there are a few lines that I want to do. On the competition side, my main focus will be trying to win a bouldering World Cup. The season starts in April and my training will resume mid-January. I’ll do the same switch into lead climbing in the middle of the season and try to be at the top of my game for the World Championships at the end of September in Paris. 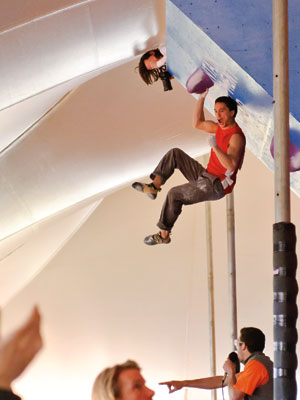 (Competing at the Canmore World Cup in 2011. Photo by Pam Eveleigh)

Who do you look up to in the international climbing scene?

Outside of the fantastic climbing, what is your favourite aspect of living in Europe?

I find that living in Europe makes it much easier to train and stay focused on climbing.  Living in France just makes me feel a bit closer to everything and with a one hour flight I have access to some of the best climbing crags in Europe. My other favourite part of living in Europe is the fantastic baguettes and pizzas.

What have you learned in your past season of competing and training in Europe? 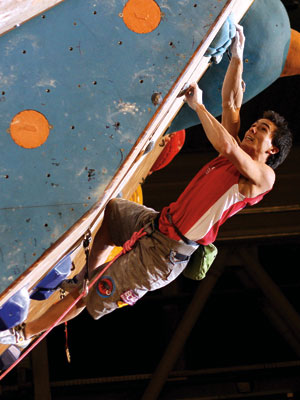 I’ve learned that it’s not just what you do at the climbing gym that dictates your results. I know that every climber is different so the system is going to vary between climbers, but I found that when I really watched what I ate (cutting out candy, pop and alcohol), I drastically improved. I also tried to eat three balanced meals. Over time, I lost a bit of weight. This was very hard mentally for me because I frown upon climbers who have an unhealthy weight obsession. For this new season, I’m going to try and hit my maximum strength fitness for bouldering. I think it’ll be hard, but I’ll try to maintain that fitness throughout the season and into the lead training in early June.

You are well accomplished in the areas of competition, single-pitch sport and bouldering. Have you ever considered trying your hand at other forms of climbing?

Well I’ve tried other types of climbing including trad and a bit of highball-solo if you include Evilution Direct. I find that some of the more popular “bold” climbs are too far out of my comfort zone. I don’t mind occasionally being on bold and dangerous climbs, but because I think very logically, I’m always considering the repercussions of my actions. I’m pretty open to trad climbing an I do it as much as I can, but the preparation for both World Cup seasons (boulder and lead) and planning the occasional trip to climb on real rock limit my opportunities to explore more trad climbing. Maybe one day.

Vikki Weldon is one of Canada’s top female competition climbers.