In the midst of growing crowds, access issues and overblown environmental concerns, a small group of dedicated Ontario climbers are busy expanding the climbing opportunities for local climbers.

Although Ontario has a rich climbing history of bold traditional ascents and difficult sport climbs, many climbers believe that the province’s new-route potential has been exhausted. While this notion has led some individuals to seek new climbing opportunities elsewhere, a few dedicated individuals have chosen to stay and search for and establish new local routes. While the motivations of these climbers differ, their routes are a critical component in encouraging new people to climb in Ontario.

In a relatively short period, Justin Dwyer has made a significant new-route impact on the seemingly tapped out cliffs of Milton’s Mount Nemo. Over the past few years, he’s established several new moderate routes among the hundreds of decade-old classics.

“I’ve never been interested in endless repeats of the same routes,” says Dwyer. “The whole first ascent thing for me started with one climb, Be Strong Eat Your Fiddleheads 5.10a, at Mount Nemo.”

Dwyer spotted the route up a prominent roof crack between two of the most well travelled climbs on Mount Nemo. He assumed it was an established route, but after  checking the guidebook realized that it had not been climbed. Dwyer sent it on his second attempt after aiding the line to remove loose rock.

“Before Fiddleheads, I had always heard and believed that the cliffs in the area were climbed out,” says Dwyer. “But if there was one unclimbed route of this calibre in such a prominent location, there must be more.”

Dwyer climbed another new route a few weeks later, but the new route fever didn’t really take hold until the following year. Since then, every trip to the crag involved searching and climbing new things. “It’s like an addiction,” says Dwyer. 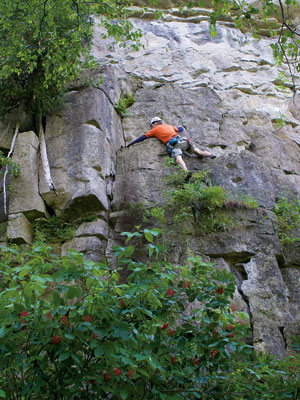 Dwyer is not alone is his quest for new routes. Randy Kielbasiewicz has been quietly establishing new climbs throughout Ontario for several years. For Kielbasiewicz, seeking out and climbing new routes is simply a more enjoyable style of climbing. “I just love the mini-adventure new routing provides. I’m generally more interested in having an epic on something unknown than climbing a nice clean established sport route,” says Kielbasiewicz.

This is not to say that Kielbasiewicz is not interested in clipping bolts. About seven years ago, he began climbing with a friend who had discovered climbing later in life. Unfortunately, the lack of easy sport routes made it difficult for them to become comfortable with leading. “I never considered this an issue because when I started climbing in the 80s, that was the business,” says Kielbasiewicz. “But climbers today want to experience climbing differently.”

So, Kielbasiewicz began bolting easy sport routes to make climbing more accessible for his friends and other climbers. He wanted new climbers to enjoy the sport that had had such a significant impact on his life.

Kielbasiewicz says, “Climbing has been a guiding force in my life for almost 20 years. It’s seen me through a lot of shit. I love to see others enjoying the sport that’s had such a positive impact on my life.”

Putting up new routes however, is not easy or simple. The expectations of how routes, especially sport routes, are developed have changed, which makes the job of new route developers even more complicated. Now, with the growing number of new climber swarming out of climbing gyms onto the nearby crags, some believe that there is now a greater need for safely bolted moderate routes.

Dwyer believes that, “Safe moderate routes (both sport and trad) are necessary for beginners learning how to climb. If you are going to hang on a fixed line and bolt something, you have a responsibility to do it properly. You have to make sure the bolts are safe and a reasonable distance apart. You also have to consider clipping stances and what might happen if someone slips while trying to clip. It really frustrates me when route developers bolt easy routes as warm-ups for themselves without considering who will actually be lining up to climb those routes.”

Kielbasiewicz’s philosophy is similar as he tends to bolt easier routes with bolts closer together. “5.12 climbers are generally more comfortable climbing a few feet above a bolt,” says Kielbasiewicz. 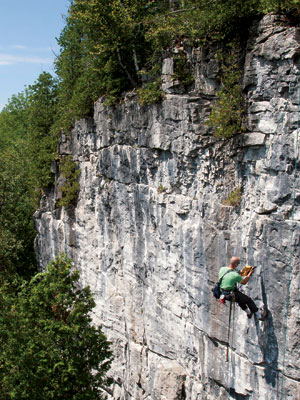 This every-man approach is why their efforts have had such a significant impact on the climbing community. The fact that many of their easiest climbs have become wildly popular, also suggest that climbing will continue to grow as long as there are the right kind of routes.

While the obvious need for more moderate climbs might be a strong motivator for some Ontario route developers, others are contributing new lines for different reasons.

St. Catherine’s based climber and developer, Nathan Kutcher feels the strongest draw to the most ridiculous and awe inspiring walls. His desire to climb the most aesthetic lines on rock and ice led him to establish his latest mixed route The Centipede M9. “In mixed climbing/drytooling there are very few local routes of that difficulty, so I have to climb them first,” says Kutcher.

Kutcher enjoys the creativity involved in establishing a new route along a beautiful natural feature regardless of difficulty.  He believes that, “The line doesn’t have to be difficult. Two of my favourite routes are under 5.10. They follow a strong visual feature and have good movement. I try to climb the rock in a way that follows the weaknesses rather than the way my mind thinks it should go. I think many times people envision a line and try to force it rather than follow what the rock gives you.”

These natural features usually require some kind of research to discover. Kutcher’s process of establishing new routes usually involves hours of exploring and searching for a good line. “I don’t just wake up and decide I want to go put up a new route,”says Kutcher. The few times Kutcher has visited a new cliff with the intent of making a first ascent, he’s spent time examining photographs for promising lines.

The ability to see a route up a natural weakness in the rock is something that is shared to different extents among these Ontario developers. This fact and their individual tendencies to different climbing styles influence the manner in which they establish their routes. “I’m primarily motivated by ground-up onsight trad climbing, so most of the routes that have caught my eye have been obvious lines, or at least have obvious features,” Dwyer explains

All these developers acknowledge that the style in which their routes are established may dictate the future of that line for a very long time. By climbing a new route, the first ascentionist creates the parameters for future ascents. If it’s a poorly conceived trad climb or sparsely bolted sport route the route may not see many repeats. “In a province with a finite amount of climbable rock, you’re either giving something to the community or stealing from it. I try to think of routes in this light,” says Kielbasiewicz

“Like it or not climbing will continue to grow. I think it’s important to mature as a community and think in terms of how to manage the pressures created by the growing number of new climbers. Those looking for an adventure will always find it,” says Kielbasiewicz.

Perhaps this why these developers continue exploring the province to establish climbs that can be enjoyed by every Ontario climber.

Aidas Rygelis is a climber, writer and photographer living in Ontario who appreciates the climbing opportunities created by the area’s new route developers.