Canadian mountaineering wouldn’t be where it is today if not for a select group of dedicated and wildly ambitious climbers. Its history is full of characters and although the future is bursting with endless potential it is rewarding to admire the past.

Each of Canada’s ranges offer something special, but the Rockies are where Canadian climbing started and the scene of many of Canada’s most radical historic routes. Many of the old guard still live in or visit the Rockies.

Nearly every summit in the Rockies had been reached by 1950, but most of the ascents were by lines of weakness and few more technical routes had been attempted. 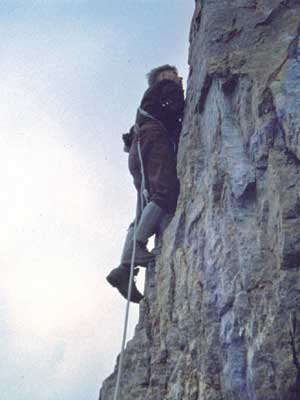 In the 1960s and 70s these men combined forces and vision and in their wake left big hobnailed boots to fill. Before grants and sponsorships, climbing magazines and gear shops, these alpinists were paving the road. The Rockies are treacherous and constantly crumbling apart as a result of their limestone composition. Although hailed as classics, many routes from the 50s and onward see few ascents.

The pioneers of our modern alpine, ice and mountain climbing here in the Rockies all took different paths after the glory days: some to climb elsewhere, some never climbed again and some continue to pursue the sport in all its forms.

Chic Scott: A living legend, Scott continues to travel the mountains, living in Banff and writing books on climbing and skiing. Through his books, guides, slideshows and guiding Scott has impressed many aspirant climbers.

Although he wasn’t the most cutting edge climbers of his day, he established many fantastic routes such as the NE Ridge of Mount Stephen in Field BC and the Ship’s Prow in Canmore, as well as a number of first winter ascents. He’s a friendly traditionalist whose knowledge of the mountains makes him Canada’s leading mountain historian. His charisma and passion for story telling can be experienced during one of his slideshows or while reading one of his many books. 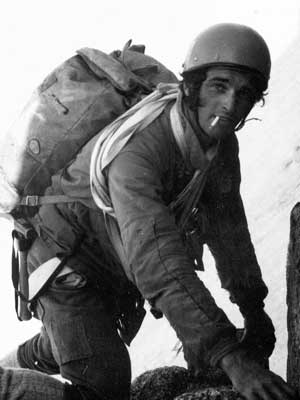 I met Scott at the Rocky Mountain Bagel Company in Canmore for a coffee one morning. Before I knew it I was 20 minutes into one of his slideshows: Making of The Eiger Sanction. The movie itself is one of the best climbing flicks out there. Scott played a big part the technical climbing scenes of the movie that were actually shot on the Eigerwand and his slideshow captured Clint Eastwood in the mountains better than the screen did.

Scott was amongst the first Canadians to climb internationally, guiding the Brenva Face of Mont Blanc in the 1970s and leading expeditions to the Himalayas. Scott’s book Pushing the Limits is the most comprehensive collection of historical facts and stories for Canadian mountaineers. Scott also dreamed up the idea for the Banff Mountain Film Festival and it has become the largest festival of its kind anywhere. In 1995 he was elected an honorary member of the Association of Canadian Mountain Guides.

Brian Greenwood: Greenwood’s name is synonymous with Rockies climbing. His name is attached to many classic routes both of pure rock and mixed alpine. His first Canadian peak was Mount Rundle, but over about 20 years he managed to re-write the history of Rockies mountaineering. Originally from Yorkshire, England he came to Canada in 1955 at the age of 21. 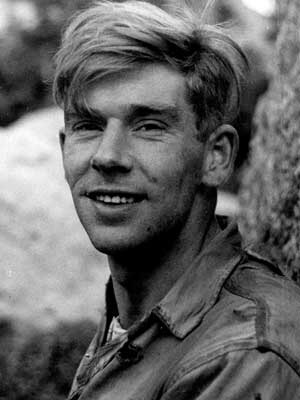 Greenwood climbed over a dozen new routes on Yamnuska, including Red Shirt (1962), Corkscrew(1967) Belfry (1957), the now uber-classic NE Face of Ha Ling, The Grand Sentinel, new routes on Castle Mountain and dozens of others. Brian, along with many others from that era did not report, name or grade routes under three pitches long, as they were not really considered climbs, just training.

Urs Kallen: Kallen is one of a kind: in his mid-60s he’s still as enthusiastic as ever about climbing. Recently, I had the chance to climb up the old classic Yam route Red Shirt with him. It was about his thirtieth trip up a route he first climbed forty years ago. He took the lead on many of the loose pitches, casually meandering past loose blocks. 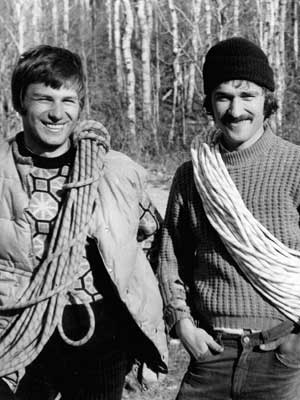 Although he has traded in his older heavier gear for some a new rack, he still carries a hammer to bash old pitons back into place. On top he paused to point out future projects in the valley behind Yam. “I seem to recall a crack down in that corner that we tried to pin up, maybe one of your Trotter types could free climb it now.” Then he pointed out a route on the Ephal Duath he climbed in the 70s at 600m and 5.9 that has likely not been repeated. When not out at the crag Kallen frequents his local climbing wall where he passes knowledge to the younger generation.

Kallen has a long list of first ascents in the Rockies, where he used skills gained on the rock of his native Switzerland. His first ascents of CMC Wall (now free at 5.11c) and Yellow Edge (now free at 5.11b) on Yamnuska were regarded as hard aid test pieces in the 70s. His tenacity was also legendary on alpine objectives. He snagged the first ascents of the North Faces of Mount Fay (1968), Mount Athabasca (1968), Mount Patterson (1973) and Mount Victoria (1969). Urs runs a successful press company (Kallen Graphics) and has a loving family with him in Calgary, close to the mountains.

Don Gardner and Charlie Locke: In 1965, 19-year-olds Locke and Gardner bagged 22 summits in six days. They had only attended a few Calgary Mountain Club meetings and read a few mountaineering books before taking to a long link-up of peaks: traversing the Moraine Lake/Paradise Valley/Lake Louise Groups. 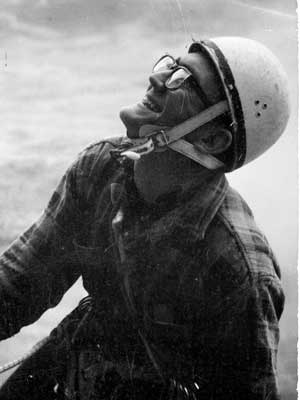 Although by today’s standards this might not be pushing the limits, they completed this with minimal gear and know-how, before speed traverses were even dreamt of. In 1969 Gardner free soloed Red Shirt 5.8+, 220m on Yamnuska. He later took to huge ski traverses of the Rockies and Arctic.

Locke continued mountaineering for about 10 more years, completing first winter ascents of mountains such as Mount Hungabee (1966), Mount Stephen (1971) and Mount Forbes (1972). Locke also nabbed the first ascent of Mount Temple with Brian Greenwood in 1966. He retired from climbing after a short career shifted focus onto business and finance and now his investments include the Lake Louise ski resort.

Jack Firth: A climber in every sense of the word, Firth came to the Rockies from Yorkshire, England in the 1970s. Although he built an impressive list of climbs and first ascents on the bigger peaks such as the North Faces of Mount Patterson and Ha Ling Peak, it was on the pure waterfall ice climbs that Firth upped the bar. 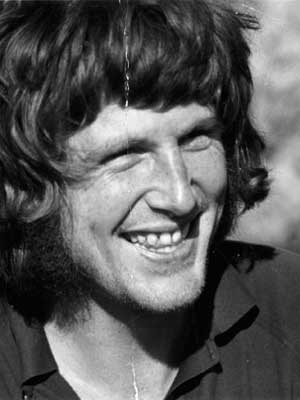 In the early 1970s, along with other bold climbers, Firth searched out steep continuous climbs: long steep curtains and pillars. During the 1973-1974 season the standards for ice climbing were pushed higher than previous seasons combined. Although many of the routes were aid climbed and sieged, the degree of difficulty was of the highest in the world, with most rated Scottish Grade 6. Of all the routes, the most impressive were Takakkaw Falls and Pilsner Pillar.

Jack also made first ascents of Carlsberg Column, The Professor Falls and Louise Falls for their first ascents. On Louise Falls Jack spent a day climbing the first two pitches and came back the third day after skiing across Lake Louise armed with homemade ice pitons and pterodactyls. Jack led the third and most difficult pitch over a few hours all free. Firth played an important role in forging our modern day ice obsessions and continues to enjoy the mountains. 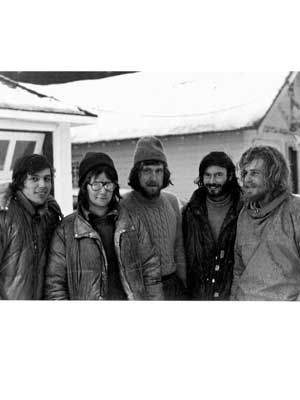 (Above: Takakkaw team from left to right: Tim Auger, John Lauchlan, Jack Firth, Bugs McKeith and Rob Wood after the first attempt on Takakkaw Falls in the winter of 1974.)

These are only a handful of the dozens of men and women from the 60s and 70s who paved the road for modern climbers and mountaineering practices.

These pioneers wrote the books and fine-tuned the home-made gear that later was manufactured on a bigger scale. They were a group of wild-eyed, unsponsored climbers who sought out the fine lines and great escapes the peaks offered for the sheer love of climbing.