I have a confession to make – despite being a local Bow Valley boy, bouldering in the Alberta/BC Rockies has always left me a bit cold. Sure – there’s plenty of limestone, great scenery, interesting people, and cozy pubs. But if you’ve ever tasted the sweet caress of a high-quality granite boulder, it’s difficult to forget. This can be a problem if you live in Calgary and the nearest granite is way up in the Bugaboos. Or is it? Recently, rumours surfaced online that folks out in the Kootenays were developing the potential around Nelson. I had to check it out for myself.

With my wife Jessica and six-month-old son Miles in tow, our first trip to the Kootenays in 2006 did not disappoint. Nelson’s reputation for hippy and dope culture is borne out in its numerous hemp shops, organic grocers and Shambhala festival. Looking past this, Nelson has so much more to offer – great shopping, amazing restaurants, uncrowded beaches, stunning scenery and a burgeoning climbing scene. The rock climbing guide was a slim photocopy covering a few areas near town and made no mention of bouldering. This led me to believe climbing occupied a status level below trance bongo playing and ultimate frisbee in the town where everyone owned a nice bike, a rusty Subaru and a mountain dog.

Instead of hitting the local sport and trad crags, I figured my best use of time was to follow the ‘hearspray’ out to Kokanee Glacier Park. The big boulders near the Old Growth Trail were intriguing, but did not deliver the goods required to keep the attention of the typical pad-slinging lazy boulderer. These rocks were 20km up a dirt road, and mostly vegetated slabs. Unable to drag my family on selfish forays into the bush, we packed it in and enjoyed the beach for the remainder of the trip.

Having such a good time the previous year, it was a no-brainer to return in 2007. This time the rain kept us mostly indoors. I discovered wet bushwhacking in the Kootenays – for the record this is something I can’t really recommend – and the boulders I found were home to more moss and lichen than I could ethically excavate as a tourist. Deflated and soggy, I beat a hasty retreat home.

The following year offered a summer of surprises. My wife was pregnant with our second son, Elias, a fact that convinced us to cancel my dream family vacation to Fontainebleau. After all, why go to France if you can’t get pissed on cheap French wine? Nelson was the backup plan, and we had cash to spend, so it was a matter of where to stay. My friend Jeff Hammerich had just moved to the area with his girlfriend Dustin and mentioned that he saw a big rock on the edge of town on the way to the local sport cliff Kootenay Crag. Fate would have it that there was a guesthouse right on Bealby Road, so clearly this was where we would stay next. The three-minute drive from downtown Nelson was appealing to my wife, the sizable granite blocks looming in the forest shadows called to me. It was officially Game On.

I had a problem. Not wanting to monopolize quality family time with climbing, I began a routine for the following two weeks: scrubbing and cleaning boulders at night and bouldering in the mornings, many times finishing before 8 AM. What struck me as most surprising was not that the locals I spoke to did not know about these rocks, rather nobody seemed to be bouldering, period. After trying a few more conventional sources, I still had no more information than when I started two years prior. One trip out to nearby Grohman Narrows yielded zero evidence of bouldering – clearly I was misinformed. Or was I? All sorts of crazy thoughts went through my mind – the local climbers were withholding info, they didn’t know or appreciate what they had, or climbing in the area was on the decline. My 50-odd new problems at Bealby Road seemed destined to be reclaimed by the dense forest.

It was now 2009 and our family of four was ready for a vacation. Coming to the Kootenays was now an annual event shared with some close friends and family. I still only knew one climber in Nelson. Quite content with returning to boulder at Bealby Road, we settled on staying in downtown Nelson, close to all the amenities. Stopping by Valhalla Pure on day one, I picked up Aaron Kristiansen and Vince Hempsall’s outstanding new guide to rockclimbing in the West Kootenays. In it, there was almost a full page on bouldering! There were also accurate instructions on how to get to the Grohman Narrows boulders, where most of the development appeared to occur.

Sticking to the unsocial start time of 6AM when the kids were still asleep, I headed out to Grohman Narrows the following day to validate my thoughts on the state of climbing and bouldering in the Kootenays, then move on to opening more problems elsewhere. With low expectations and lower caffeine levels, I stumbled down from the highway past junk and debris, chuckling to myself as the lake was only 100m further. This was clearly a tiny bouldering area and a waste of time. 60 seconds of walking led me to the first obvious problem, a steep caved-out rock with a perfect landing. My jaw dropped at what I saw before me and my hands immediately greased with perspiration. I was standing in front of the 5-star problem Vertigo and clearly I couldn’t have been more wrong about the place. As it turned out, I was wrong about most things involving Nelson and climbing.

My new mission was to spend the next 2 weeks climbing at Grohman at the crack of dawn, and to try every problem that appeared ready for consumption. The daytime temps were exceeding 34C – not ideal for granite slopers – plus I now needed to be back before two kids woke up to double-team their mother, so the alpine start worked out rather nicely. My army of brushes stayed in their bag. Seeing a need to document what I was experiencing, I kept track of the problems climbed, hitting almost 100 without climbing a single variation or eliminate. Every day new lines revealed themselves – all with obviously established lines. Whoever was responsible was not only a mad-hyper developer, they were also pretty strong and quite visionary. Jeff joined me for my final session, a day after returning from a week in the Rockies. He spoke of some of the climbers he ran into, and the level of energy they were applying not only to bouldering, but to sport and alpine cragging. It was apparent Nelson was not the backwater climbing dead-end I previously believed it to be, rather it was the genuine article – a contender for roadtrips from near and far, a potential destination. My psych was still strong, but the vacation was at an end. My tips thanked me for a chance to rest.

After returning home to Calgary, I recruited Jeff to get the skinny on this Nelson bouldering phenomena that I paid witness to. I needed to know who was responsible for such an amazing effort at Grohman, and what were they up to next. Jeff quickly lined up local climber Curtis Jameson to begin the interrogation and make introductions. Through Curtis I learned his personal major efforts at Grohman started in 2003, and that it was a group effort involving a number of people including David and Annie Bristow, and Scott and Lisa Legere. Together they have put up an estimated 300 problems just at Grohman Narrows alone. Local classics include Brass Balls (V7), The Unicorn (V7), Vertigo (V5)Tsunami (V7), Equilibrium (V3), The Chainsaw (V4), The Fly (V5), Littlest Hobo (V4), Battle Axe (V5), Oscar (V4), Dirt Digler (V5), Shoulder Rehab (V4) and The Force (V6). At Grohman there are probably 200 problems under V4, another hundred between V4 and V8, and easily another 50 through to V10 and beyond.

Recognizing the potential, Nelson locals are extending their efforts into nearby Pass Creek, Castlegar, and the Valhallas. One slide on the way to Drinnon Pass at Hoder Creek holds hundreds of massive orange granite boulders with only a handful of established problems to date. Probably the only thing stopping a true explosion in development is the 20 feet of snow that drops on the area in winter. Access also remains an issue – most of the Bealby Road boulders are on private property which happens to be slated for some property development. If any reader with some spare coin wants to pony up for this in the interests of the climbing community – put in an offer! Other access issues persist, and a low-key/low impact approach to any of the described areas is best.

It’s now October and the snow is flying in Calgary. Most climbers are beginning to hang up their rockshoes and sharpen their picks and crampons. Damn this country and its Hoth-like winters. My only consolation is knowing I don’t need to go to France next summer to get my bouldering fix, or even Squamish for that matter. Not when Nelson, the Kootenays, and its marvelous granite are waiting nearby. 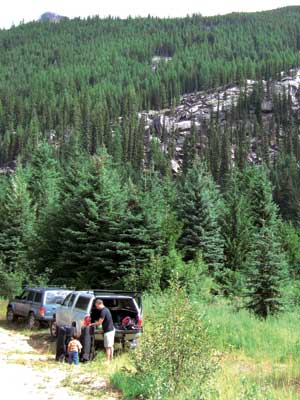 Nelson has a quality bouldering within or near the city limits:

Bealby Road- problems to V6 on coarse granite with good landings. Access via the northeast side of town before the big orange bridge. Problems start at the large roadside boulder and extend along the hillside in the woods.

Grohman Narrows- problems to V10 on perfect granite with good landings. Above the highway is private property. Access via Hwy 6 to Castlegar, 1.8 km from the Welcome to Nelson sign is a large pullout on the right with overhead wires. Walk down to the lake on a good trail that starts in the middle of the pullout.

Hoder Creek – problems to V8 way up in the Valhallas, 1.5 hrs from Nelson, this slide of coarse granite is a veritable maze of gigantic blocks. 500 m of nasty bushwhacking required. Access via Slocan, following local signs to Drinnon Pass. Look up where the bridge crosses Hoder Creek.

Pass Creek – in the process of being developed, not much is known. Bigger and potentially better than Grohman.

Castlegar – rockclimbing.com has some info on the granite here, 40 min from Nelson. Sounds like the tip of the iceberg has been developed, with a ton of potential lurking

Kootenay Lake – north of Creston on the way to the ferry, between Sirdar and Boswell lies a stretch of road with boulders on both sides.

Written by Marcus Norman and originally published in a 2010 Gripped magazine.