As the weekend approaches, one might wonder: “Who is going to win?” Of course, one can only speculate but that’s always fun to do. Below we take a closer look at the women’s field.

An obvious competitor to look out for is the winner of last year’s Nationals: Allison Vest. First on the running order, Vest is clearly in fine form, fresh off her victory at the B.C. Provincials last month and a 10-day training camp with the national team.

A fellow Canadian team member, World Cup finalist, and former national champion herself, Alannah Yip will no doubt give Vest a run for her money. Yip came second last year only because of one attempt to zone. This year, she won the 2018 Portland Boulder Rally and came 2nd at the Northwest Boulderfest.

It’s hard to say what conditions would lead to one eking ahead of the other. They are both well-rounded climbers, skilled in flexibility, balance and power. It could be argued that Yip’s greater experience on the World Cup circuit gives her an advantage over Vest. Yip is notably a careful and measured competitor who is able to read problems well and quickly regroup and reassess an approach if needed.

On the other hand, Vest has a trademark go get ‘er quality when she climbs that gets her to the top when it matters. When she’s on a roll, she seems unstoppable. However, when the going gets tough, Vest can take it hard whereas Yip can recover. Needless to say, it would be a big upset if we don’t see these two B.C. climbers duking it out in finals.

Of course, one should not underestimate the other finalists from last year: Bronwen Karnis, Madison Fischer, Alyssa Weber and Becca Frangos are all podium contenders. Ontario-based Karnis, for example, came second in the Junior category at Youth Bouldering Nationals two weeks ago and has won numerous big comps. Fischer and Weber are both well-known powerhouses on the circuit, as is Frangos, member of the National Team Program.

Though not vying for a national ranking, Mei Nagasako could be a threat, too. The Tokyo native has made impressions at local events in Ontario, which is now her home base. It will be exciting to see how she fares on the National front.

Finally, a potential dark horse, particularly for those who don’t follow the youth comp circuit, is 15 year-old Indiana Chapman. As a youth climber, Chapman doesn’t often compete with the women in Open but she did this January at the TdB “Bloc Buster” competition at Climber’s Rock, which is renowned for powerful problems and a deep field. The Ontario-based climber came third, ahead of strong women Karnis and Bea Evans (a threat in her own right). Chapman has placed 4th in her divisions at the last two IFSC World Championships, and also just won the Youth A category at Youth Nationals in Montreal.

Despite her recent victory, Chapman is placing no pressure on herself: “I’m really excited to compete at my first Open Nationals! I have no expectations, except to have a really great time climbing with the best climbers in the country.”

Of course, “no expectations” is sometimes just what one needs to surprise oneself, and everyone else…

the face you make when you REALLY don’t want to fall! 💪🏻😤 getting super excited for Open Bouldering Nationals this weekend! ready for more #tryhard faces like this🤪 • 📷: from #ybn2019 #gameface #boulderingnationals #teamcanada🇨🇦 #thepsycheishigh

To be sure, the field is so strong that half the competitors are potential finalists. We didn’t even get to local Albertans, e.g., Eva Thompson and Lisa van de Panne, and the French Canadian contingent, such as Véro Gosselin, Audrey Larochelle and Olivia Wyett. Unfortunately Babette Roy will be missing the event due to a finger injury.

These days, competitors are intentionally diversifying their skill sets to be prepared for any boulder problem that comes their way. So it’s less about who is good at what style of problem and more about who can show up and perform, right then and there.

And that’s why competitions are so exciting to watch. 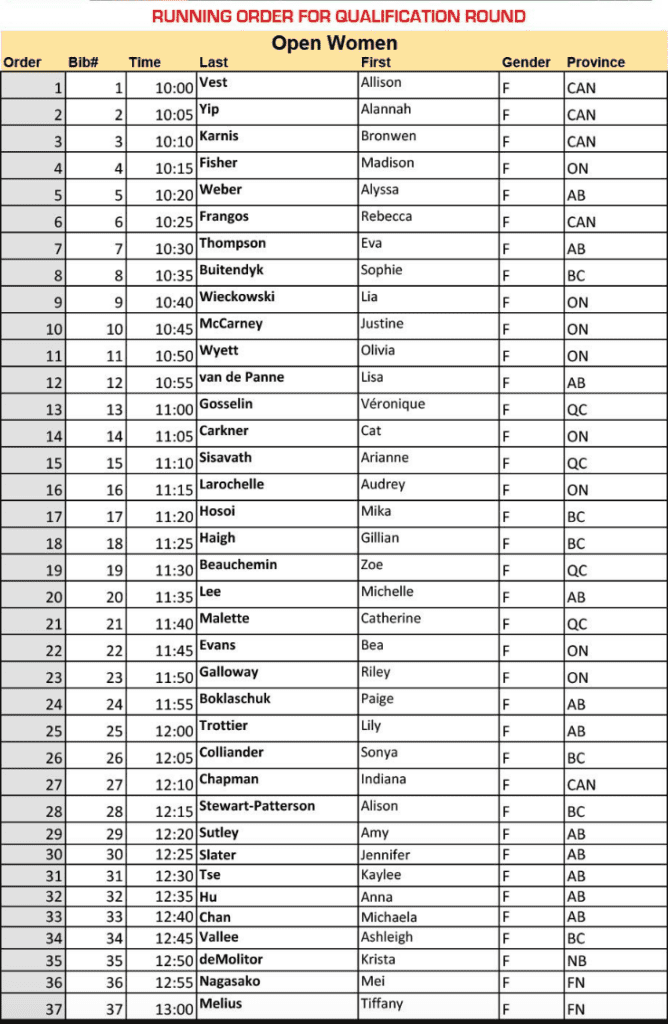