Last week, a press conference was held to unveil the program and the evaluation criteria of The North Face Youth Boulder National Championships which will be held for the first time in the city of Québec from Feb. 17 to 19, 2018 at Délire Escalade Ste-Foy. 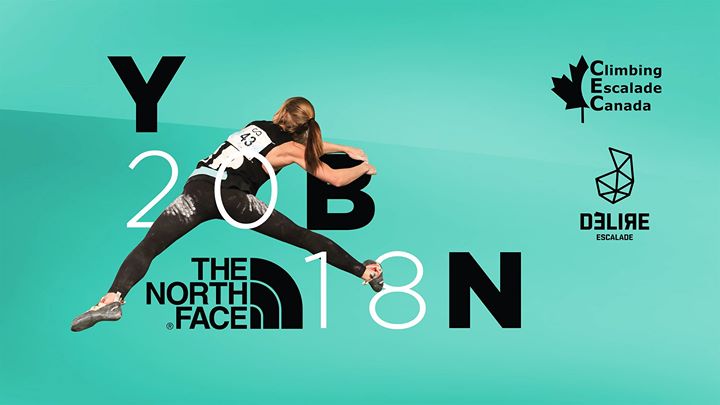 The event is the highest level of national boulder competition sanctioned by Climbing Escalade Canada (CEC). Almost 220 athletes between the ages of 12 and 19 from all provinces of Canada will meet in a competition with complex courses that will test their determination and strength to the utmost degree.

Representatives from all of the participating organizations closely linked to the smooth running of the championships were at Délire Ste-Foy today. Mr. Vincent Légaré, co-owner of Délire Escalade, took the opportunity to emphasize how proud his team was to have been chosen as hosts of the event.

As he put it, “Climbing Escalade Canada, the national federation of sport climbing, chose Délire Escalade to hold the event because our facilities are among the best in the country and we have an experienced team at hosting major competitive events.”

Mr. Légaré also presented the program of the Championships, which will begin on Saturday, February 17 with the qualification rounds from 8 am to 2:30 pm (Youth B and C) and from 3:30 to 10 pm (Youth A and Junior). The sixteen highest-ranked individuals from each category will advance to the next stage.

The semi-finals will be held on February 18 from 9 am to 1 pm (Youth B and C) and from 2 to 6 pm (Youth A and Junior), following the same format as for the qualification rounds. The eight highest-ranked individuals will advance to the last stage.

At 7:30 pm, at the Grand Times Hotel, Jeffrey Thomson, High Performance Director of CEC, will give a lecture for athletes, coaches and parents. The finals, which will determine the champions in each age category, will be held on Monday, February 19 from 9 am to 1 pm (Youth B and C) and from 2 pm to 6 pm (Youth A and Junior). The medal ceremony will start at 6 pm.

Délire Escalade is happy to have The North Face, a true leader in outdoor recreation and sporting activities, as a title sponsor of the championships. This natural fit allowed both companies to support the competitive climbing industry and help it develop. As Max Turcotte, marketing coordinator for The North Face Canada, said, “The North Face has been an avid partner of the climbing community for more than 50 years.”

Dung Nguyen, director of Climbing Escalade Canada and a member of the Commission compétition of the Fédération québécoise de la montagne et de l’escalade (FQME), presented the role of climbing organizations on the Quebec circuit as well as the current composition of the Quebec team.

Two athletes who had been particularly successful on the international stage, Babette Roy and Quebec youth champion Hugo Dorval, were there this morning to give us a live demonstration. Mr. Nguyen stated that these climbers had made impressive progress.

In his words, “Since 2009, we have seen the beginnings, the progress and, now, the performance of certain thriving athletes. Some of them have joined the national team and represent Canada internationally, such as Babette Roy who notably came in first in the combined event and first in her group at the 2017 Panamerican Championship.”

Dung Nguyen highlighted that this prestigious event is a qualification round for the world youth championship, an International Federation of Sport Climbing (IFSC) event held in August 2018.

The sport climbing pictogram for the @youtholympics 2018 is here! Read about how Buenos Aires students guided the design at ifsc-climbing.org 📷 @buenosaires2018

Mr. Nguyen also explained the selection process for this competition as well as the evaluation criteria by which the young athletes will be judged. These criteria are consistent with the regulations set by the IFSC (for more details, see http://www.ifsc-climbing.org/images/World_competitions/Event_regulations/IFSC-Rules_2017_V2.1.pdf).

As registration for the tournament ends today, the final list of competitors will be known this Friday, February 2, following which this list will be available on Délire Escalade’s website. Since it has become an official sport for the 2020 Olympic Games, several young climbers have their sights set on competing in the 2024 Games.

A Next Generation to Watch Out For
Even though the names of all the athletes who will compete in The North Face Youth Boulder National Championships are not yet known, several climbers who have shone on the Canadian stage have confirmed their presence.

Délire Escalade: A Benchmark in Climbing in Quebec
Founded in 2008 by Lisa Lajoie, Jeff Beaulieu and Vincent Légaré, three climbing enthusiasts, Délire Escalade will celebrate the tenth anniversary of its Beauport branch this year. At 45 feet tall, it has the highest walls in the city of Québec. 2018 also marks the third anniversary of its Ste-Foy branch, which, in less than two years of operations, has doubled its floor area to 17,500 square feet.

These two rooms allow for the practice of the three main types of climbing – lead climbing, bouldering and speed climbing –, offer yoga classes, a training gym, outdoor outings for rock climbing or ice climbing and provide a large variety of training courses from beginning to advanced.

For almost 10 years now, Délire Escalade has witnessed and participated in the development of the recreational and competitive parts of climbing with the creation of the Club compétitif d’escalade de Québec (CCEQ) in 2010, which today offers four kinds of training, including Next Gen (7-12 years old), Elite (13-17 years old) and Excellence (16 years and up).

In collaboration with two secondary schools, Cardinal-Roy and La Seigneurie, Délire Escalade has also set up a fourth option called Concentration Escalade which will be operational starting in September 2018. Délire Escalade is a real breeding group for high-performance athletes.

Moreover, did you know that Délire Escalade’s industry has equipped several large sports halls on the Quebec, Canadian and international circuits for more than fifteen years? This young flagship of Quebec’s climbing industry is a fast-growing company that has not finished making its mark.

Some people build walls. Other people climb them. We’re doing both. We’ve spent 50 years searching for walls to climb because, to us, they offer both challenge and opportunity and they fan the flames of our curiosity. Climbing has taught us to trust, to work together, to create safety in partnership and meaning out of hardship. We see walls as a place to unite our community, so we’re building walls that reflect the world we want to see. Walls are meant for climbing. We are donating $1 million to @TrustForPublicLand to help build public climbing walls in U.S. communities. Visit thenorthface.com/walls (link in bio) to learn more. #ClimbWalls