The IFSC has partnered with Perfect Descent for Speed climbing comps. The following is a report from the IFSC. 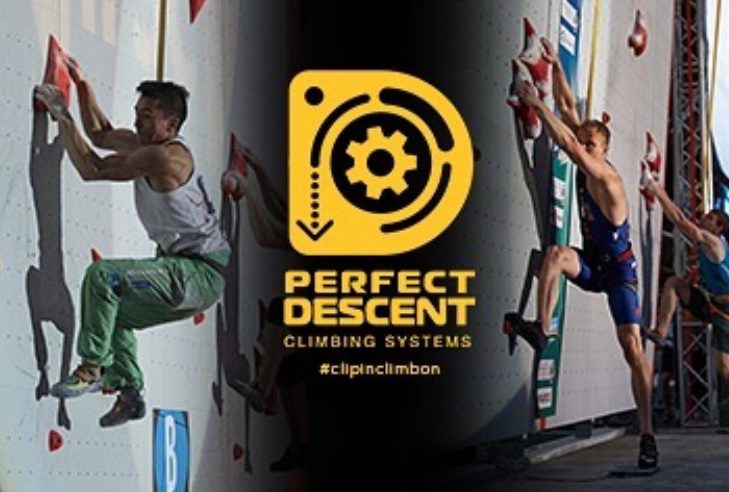 is the world leader in Speed climbing auto-belays. Distributed by Aerial Adventure Technologies, Perfect Descent auto-belays were selected by the IFSC in 2016 to provide a more secure and fair competition environment, as well as a cleaner field of play than the human belay previously in use.

The Model 220 (now called Speed Drive™) used at IFSC World Cup and IFSC World Championship events also boasts the fastest industry retraction rate available on the auto-belay market at 15 feet per second (4.6m/s). As the IFSC Exclusive Auto-Belay Partner, Perfect Descent will be present throughout the 2018 season at IFSC events and on IFSC social media platforms.

“We are proud to partner with the IFSC and support the growing global community of Sport Climbing athletes. Speed climbing is a dynamic and demanding discipline and we are excited to have a role in promoting safe and fair competition,” says Andrew Miller, Vice-President of Aerial Adventure Technologies.

Following the inclusion of Sport Climbing to the Sports Programme of the Olympic Games Tokyo 2020 and Youth Olympic Games Buenos Aires 2018 taking place in October, participation in the Speed climbing discipline at IFSC events increased by 25 percent last year and continues to grow in 2018.

In-line with this growth, the IFSC and Perfect Descent are partnering to produce original video series with IFSC athletes which present the Speed climbing discipline, discuss the Olympic format and highlight the most memorable races of the 2018 season. Watch the first interview below with three-time Combined world champion Sean McColl (CAN), 3-time Combined season champion Jakob Schubert (AUT) and reigning Speed world champion Anna Tsyganova (RUS).

“We are excited to partner with Perfect Descent to enhance the visibility of Speed climbing athletes and technology leading up to the upcoming Youth Olympic Games in Buenos Aires and Olympic Games in Tokyo,” says IFSC President Marco Scolaris. “We are all climbers, rising higher, faster and stronger together.”

@perfect_descent is now a partner of the IFSC! News at ifsc-climbing.org "We are excited to partner with Perfect Descent to enhance the visibility of Speed climbing athletes and technology leading up to the Youth Olympic Games in Buenos Aires and Olympic Games in Tokyo. We are all climbers, rising higher, faster and stronger together." – IFSC President Marco Scolaris