This shoe is special. Perhaps it is the leather or the pedigree or the fact that only a few models sport the fabled No-Edge Technology, but it’s more than that. It inspires confidence. It allows the climber to feel in tune with the rock.

“No-Edge” sure sounds futuristic, but at the same time it sounds counter-intuitive. Who wouldn’t want an edge when footholds are so commonly described by their angled nature? Team Canada climber Lucas Uchida is a fan of the Futura’s sleek design, stating “I love the No-Edge Technology and how soft the midsole is.”  La Sportiva’s 1.1 millimetre Laspoflex midsole works with the No-Edge sole to create strong, standing platform.

Though it is on the softer-side, La Sportiva’s inclusion of a mid-sole makes the No-Edge technology especially effective. It gives the climber additional resistance so that they do not have to rely on their feet. This is necessary as the lack of an edge brings the climber’s toe close to the end of the shoe. Normally, this would increase sensitivity making it difficult to stand on tiny foot-chips. However, the structure provided by the midsole, in conjunction with the tension of La Sportiva’s famous P3 band, gives the shoe a feeling of security on slick holds. Even so, No-Edge can take time to get used to, but Uchida said, “once I adapted to it, I could trust my feet on anything.” 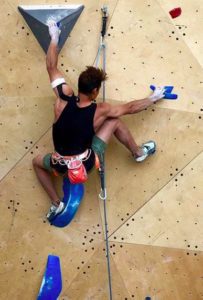 (Lucas Uchida on route in the low-volume Futura)

Uchida has used the Futura for two years and in a number of World Cups, but what influenced his decision to bring it onto the mats. Uchida responded, “I think about performance. I try to pick a shoe that I think is well rounded, so it is easier to adapt to different styles and moves.” Even shoes like Scarpa’s Instinct series are more limited than the Futura in this regard. Though the Instinct is a well-rounded bouldering shoe, it is less secure on smears. The Futura, is one of the best smearing shoes I have worn, but is not limited by this definition. Though it is soft and supple,  the climber can step to their project knowing that the Futura will  handle a screw-wide foot chip or a massive Dimension volume.

Even when things get a little more complicated, the Futura excels. The P3 tensioning system found in shoes like the Miura and the Solution offers an exceptionally stable hooking platform. Working in conjunction with the sticky XS Grip 2 rubber, the P3 band offers a no-slip platform that performs well with the midsole to allow for bomber hooks, cams and scums. Similarly, the toe patch of the shoe crushes toe-hooks, as the leather upper makes it easy to pull up into the toe-box.

As for longevity, it depends on the user. The P3 band is strong, so the shoe will retain its shape with time, but the leather construction allows for about a full size of stretch. In terms of de-lamination, the Futura will last as long as it is treated with care. Conversely, the shoe will disintegrate if brutalized. Fortunately, this model can handle a resole. 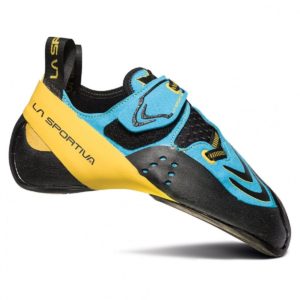 Overall, the Futura is pretty sick. In terms of out-of-the-box performance, it is among the top five shoes in the world. There is virtually no break-in period and the low-volume model is an aesthetically brilliant product. For competition climbing, it is a masterpiece, not requiring anything more than the confidence of the user on all styles of climbing. For outdoors, it is delicate and confidence inspiring, but will wear quickly. In the gym, it is a training tool the defines perfect footwork.

Unfortunately, the Futura has one large weakness: construction. This is to say that the build quality of the shoe leaves something to be desired. Though one of the highest performing shoes on the market, it suffers from its fragile design.  This is not a problem for the precise climber, but the less experienced novice may find themselves burning through their shoes more quickly than they originally anticipated.