If you’re looking to get into waterfall ice climbing, then you’ll need at least one set of tools. It’s been a few years since any brand has released a new design, so if you’re a veteran ice climber, then you’ll have seen these tools before. We know that Black Diamond will start to release a new series of tools starting in 2024. For now, here are some of the best ice tools on the market for beginner and experienced ice climbers.

If you’re familiar with Black Diamond tools, then imagine a cross between the Black Diamond Fuel and the original Black Diamond Fusion. It’s a technical tool designed to excel on steep ice, which it does, but to also be used for tricky mixed sections. The open angle gives it a smooth swing, one that doesn’t demand a big wrist flick, and allows you to drive it into ice, whether soft or brittle. Like many tools these days, the offset grip helps you to fight the pump when moving through steep terrain. Unlike many extremely technical tools, the shape of the Reactor makes it perform well on less than vertical ice. The Reactor is one of the best tools available today and recommended for new and experienced climbers. 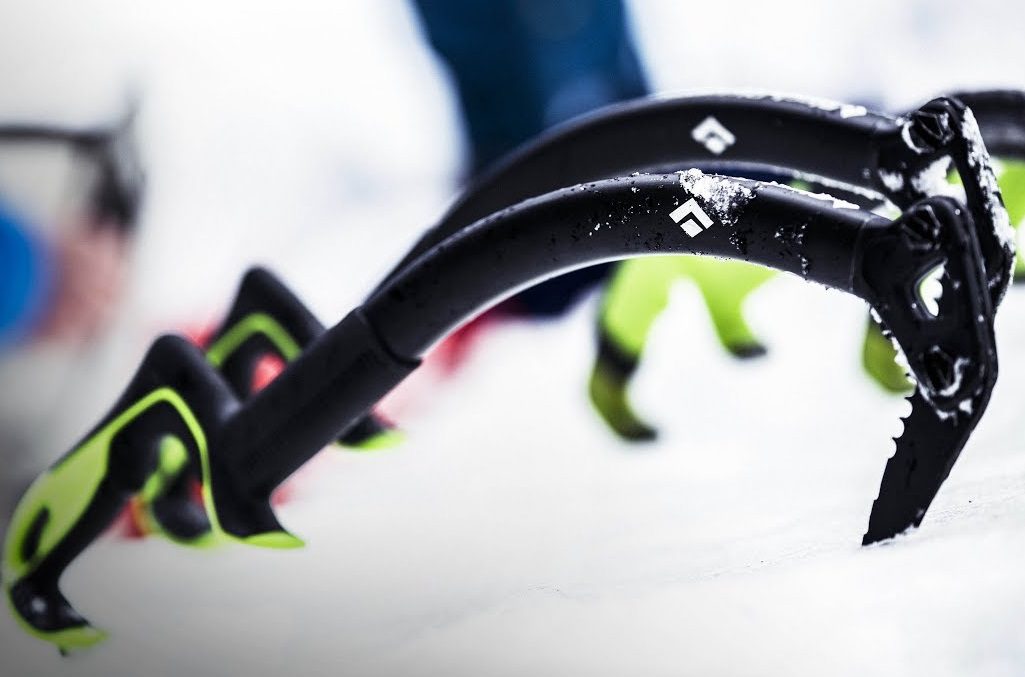 Black Diamond has been a leader in ice climbing equipment for decades and the Fuel has stood the test of time as a top choice. The weight is distributed well, which helps get the most out of the many swings you’ll need to do to find purchase in the glass-like ice. It’s priced competitively and have a tacky grip. Spare picks are inexpensive and you don’t have a hammer or adze to deal with on pure ice routes. The Fuel is one of the best all-round ice tools for short and tall ice and mixed climbs. Note: Black Diamond will be releasing new ice tools over several seasons starting next winter. 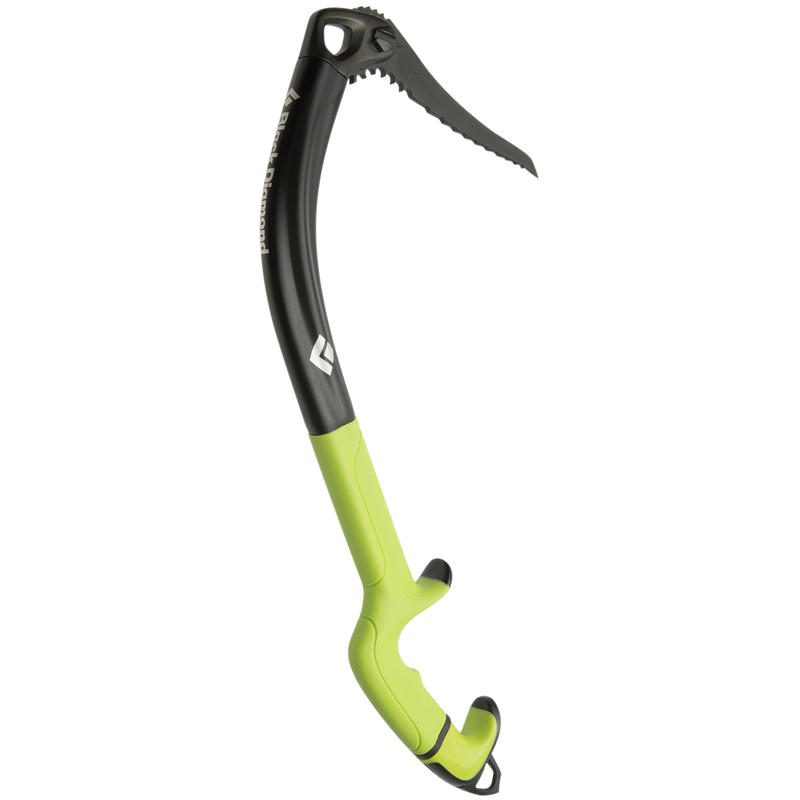 The Cassin X-Dreams are high functioning, modular tools. You are best saving these aggressive tools for high-end ice and mixed climbing. Its handle can be adjusted between “Dry” and “Ice” modes offering roughly the same clearance as the Petzl Ergonomic and Nomic, respectively. The Dry mode reduces pick shift when alternating between upper and lower pommels, while Ice mode swings better in vertical or slightly overhung terrain. When bringing the X-Dreams on an alpine climb with snow-bound or glaciated approaches, consider swapping out the handle for the X-Dream Alpine Handle; the bottom spike will provide vastly more security than the default handle. And for those with small hands, Cassin sells handle-height inserts to accommodate a variety of users. The X-Dreams can also be fitted with head weights and hammers which are worthy investments for this lightweight tool. Although hammering in a piton is difficult with such a curved shaft, the hammer is useful when tapping tools into thin ice or resetting in-situ piton placements. 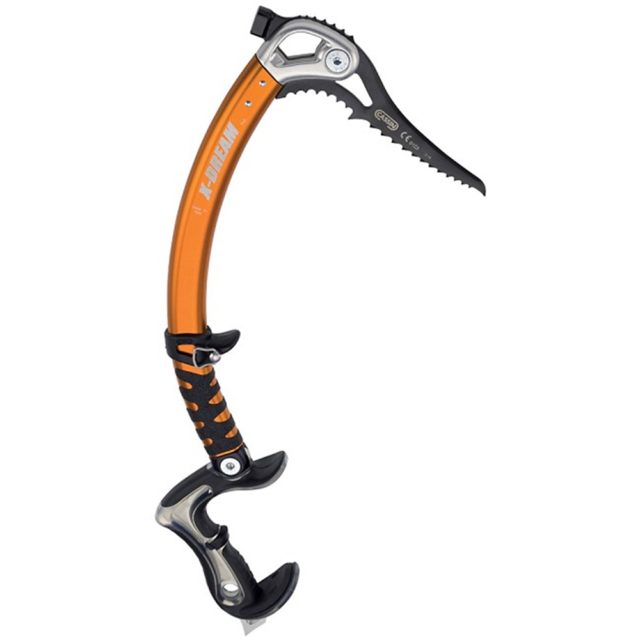 The Dark Machine is an aggressive and technical axe geared towards the pure ice climber. It’s extremely lightweight thanks to the G-bone carbon composite shaft and full carbon handle. The handle is all carbon, while the shaft is aluminum wrapped in carbon. The aluminum reduces weight and the carbon adds damping. The balance, without the pick weight, is high, which helps the 490-gram tool penetrate ice. We found that despite its lightness, it was easy to sink into brittle ice in frigid temps thanks to its toughness and durability. The handle is not adjustable or removable. The head’s modular system makes it easy to use interchangeable blades and accessories: naked, mini-hammer, hammer and adze. You can also choose between different blade technologies, such as hot forged and laser cut. The weight profile and handle shape are similar to the Petzl Nomic, without pick weights. These are very precise tools that offer nearly effortless placements on difficult ice lines. 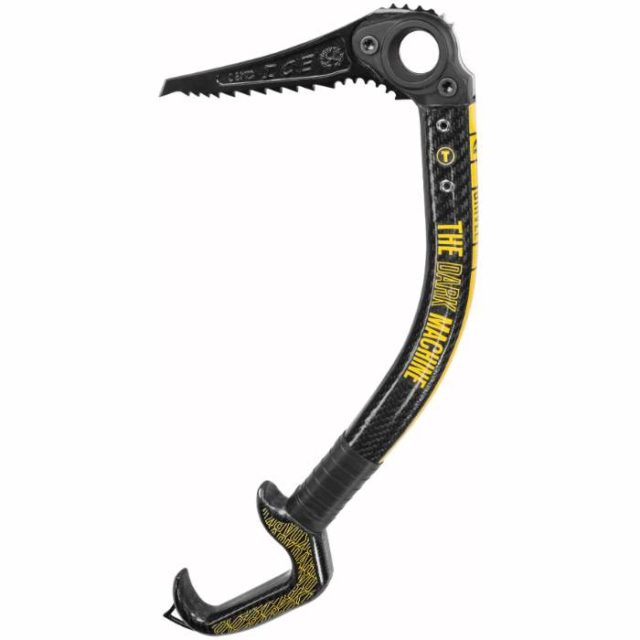 The Grivel Tech Machine has a steeply bent shaft and an ergonomic grip built for technical drytooling and ice climbing. The pick tapers from a thick 5 mm down to a hair-thin 2.7 mm at the tip (one of the thinnest on the market). The aluminum head has a big clipping hole that makes it a cinch to rack at belays. It swings similar to the Petzl Nomic and feels about the same weight. The non-adjustable grip is ergonomic and has a hard-plastic cover with sticky rubber. The easily clippable spike is nice to clip for overhead protection when placing screws. The aluminum shaft is very rigid vertically, but has some flex on mixed horizontal. The ice pick has a long front tooth that’s easy to clean, and teeth on top for steinpulls. The rock pick is angled more for drytooling and can accept an adze or hammer. The tool is also available in carbon as the Tech Machine Carbon. 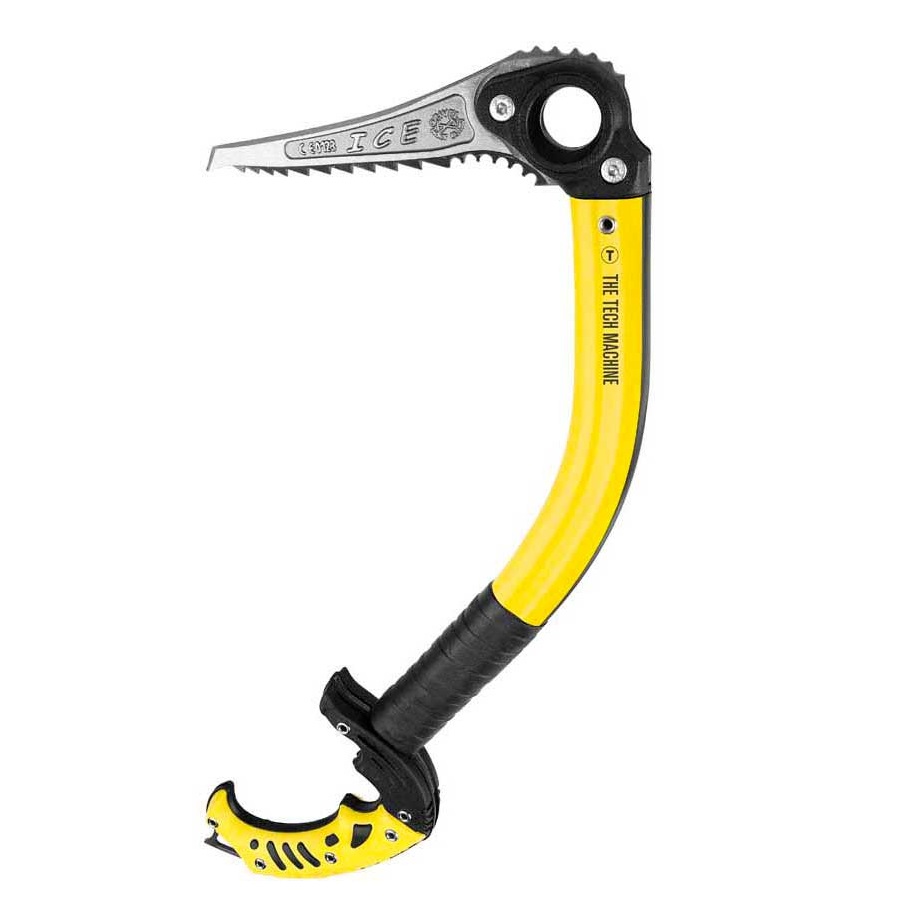 The Ergonomic raised the standard for winter mixed/ice tool design. The tool bridges the gap between the popular Nomic and its predecessor, the Ergo, offering more utility than ever as a specialist tool, made for everything from steep ice to overhanging dry tooling and mixed climbs. It takes the head and shaft of the Nomic and adds a much beefier, more aggressive handle design for steeper climbing, pick stability and more relaxed hang time. The nicely curved shaft provides clearance for hooking over bulges without the knuckle bashing. Its angled double grip has a contoured pinky rest that lets you hang without tiring yourself, and the handle’s design gives maximum surface area for your glove. For climbers who use the Nomic and would like a more advanced and versatile tool, the transition to the Ergonomic will feel easy. With the pick weights on, they’re the best steep ice climbing tool on the market. Strip the weights and they become one of the most advanced drytooling tools out there. The shape of the weights is optimized for slotting the pick in cracks, they work like wedges that help you pull through cruxes. Three pics are available: Ice, Pur’Ice, Dry and Pur’Dry. The Ergonomic feels like an extension of your arm or steep ice and rock. 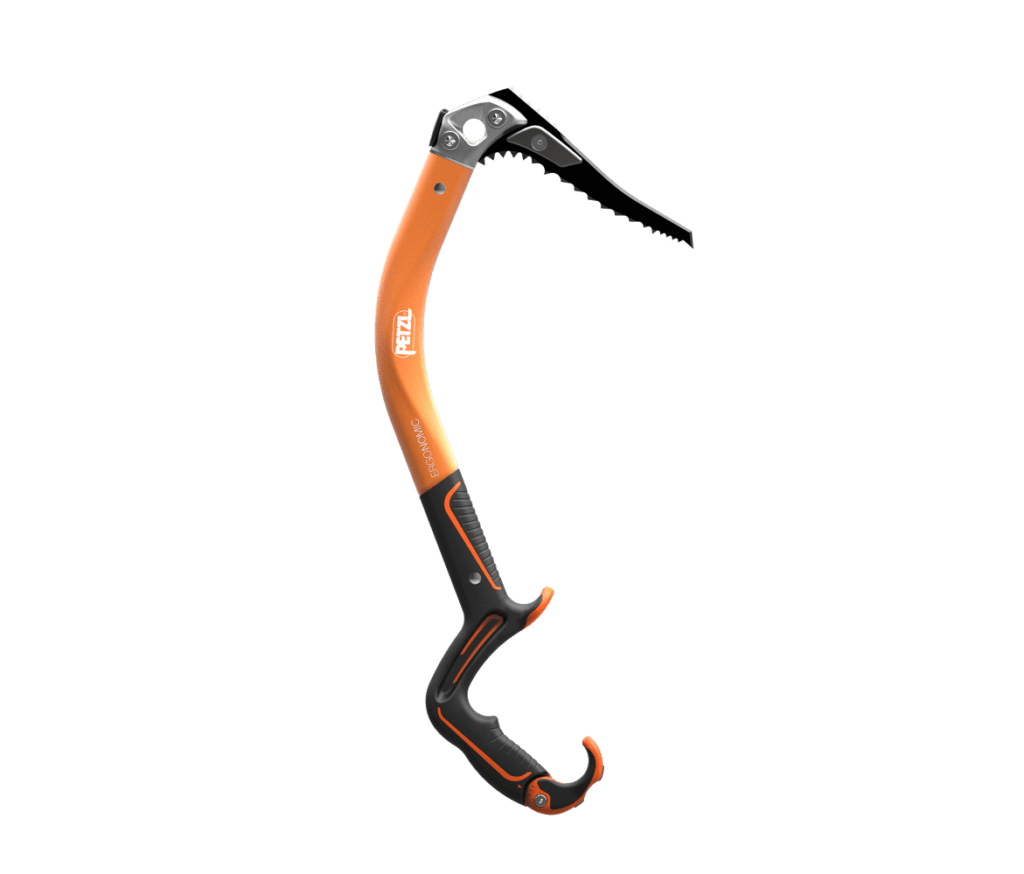 The modern Nomic come 20 grams lighter than the previous version, despite the added hammer and stainless-steel spike to the bottom. One of the first things we noticed was how well balanced they are. The combination of the removable tapered pick weight (same as the Ergonomic), a “hydro-formed” shaft and adjustable handle. The lower handle adjusts to three sizes with an Allen key. The upper handle is rubberized, so no need for additional grip tape. The shape of the tool and wider handle makes holding them anywhere along the shaft comfortable. The removable hammer is included with the tools and can be stripped off to minimize weight for dry-tooling. The serrated stainless-steel spike on the bottom of the tool has a connection point that is compatible with most tether systems. The new Nomic excels on vertical ice, where the included Pur’Ice sinks into funky features and removes with ease thanks to the 3 mm tapered steel point. The Nomic continues to be one of the most best workhorse tools on the market. 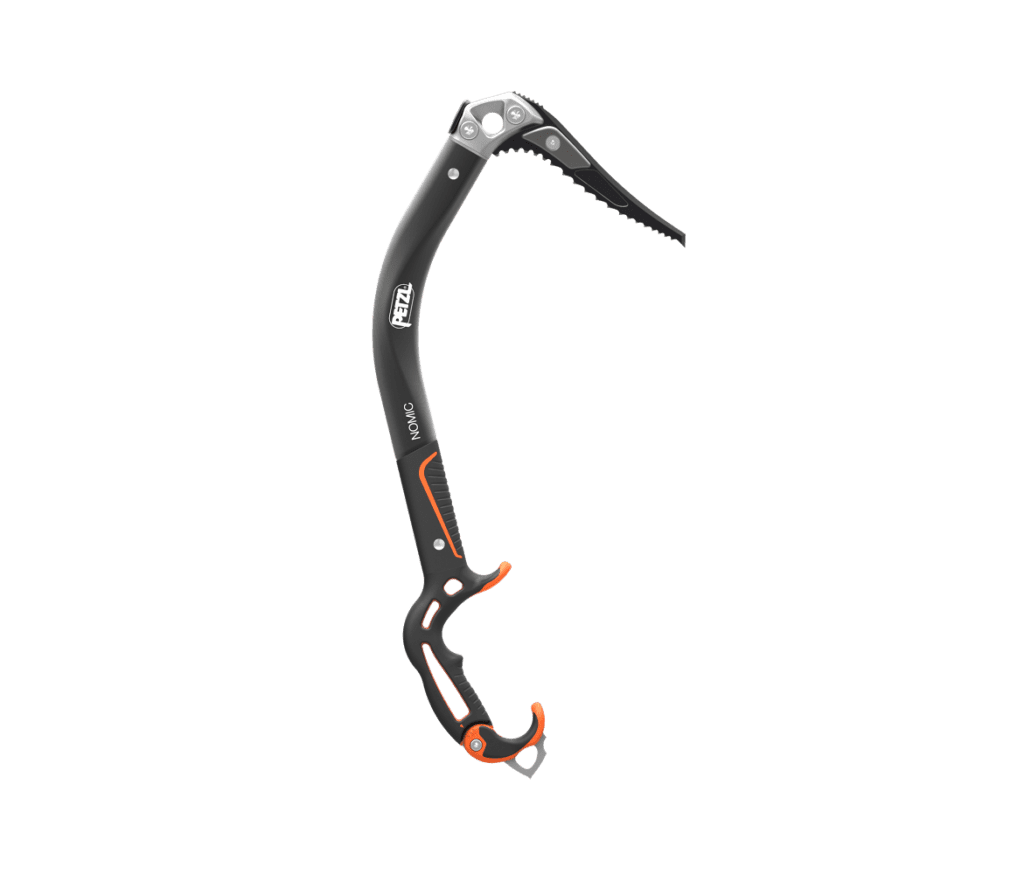 Getting into ice climbing has never been easier, thanks to modern ice climbing tools. Over 100 years of development has resulted in a variety ice tools designed for a range of winter climbing, such as pure ice lines, mixed routes and drytooling.

The first-ever ice axe was the alpenstock, a long wooden pole with an iron spike tip, that was used by shepherds for travel on snowfields and glaciers in the Alps hundreds of years ago. In 1786, Jacques Balmat and Michel-Gabriel Paccard made the first ascent of Mont Blanc using an alpenstock and small axe. The two tools were later fused into a climbing-specific tool around 1840 that featured a vertical adze. In 1860, the adze was rotated horizontally. Fast forward to the beginning of the 20th century, when picks lengthened to about twice the length of the adze.

In the 1940s, legendary Scottish climber Hamish MacInees designed the first all-metal ice axe. His early ice axes and ice hammers had a straight, slightly declined pick that were not sufficiently “dropped” for direct aid on vertical ice. His aluminium-alloy-shaft ice tools were manufactured for the public in the 1960’s, after three climbers died on Ben Nevis in Zero Gully when their wooden ice tools broke.

In 1970, MacInees invented the Terrordactyl or “Terror,” which had a global impact on hard winter climbing, and helped lead to an ice climbing revolution in the 1970s and ’80s. Around the same time, Yvon Chouinard developed a short, wooden shafted ice hammer with a curved pick serrated on its bottom edge known as the Climaxe. Climbers had been seeking a better way of remaining in contact with steep and overhanging ice. The technique at the time was to hang on to ice pitons, driven into the ice above the leader’s head, which was both dangerous and insecure.

The Terrordactyl was a short, all-metal ice tool with an aluminum alloy shaft and a high-quality pressed steel head i with an adze and steeply inclined serrated pick. For several years, the Chouinard ice hammer and the Terrordactyl dominated the forefront of international ice climbing. Eventually, the accepted worldwide design for modern ice tools evolved as a combination with the pick steeply dropped like the Terror but curved upwards at the tip like a reversed Chouinard Climaxe hammer, which was known as the Banana pick.

Since then, all types of ice tools have been designed for different styles of climbing: mountaineering, alpine, glacier, waterfall ice, mixed and dry.