Winter came early to some of Canada’s mountains in fall 2020, resulting in epic early-season conditions for ice climbing, skiing and even skating.

Backcountry and pond skating are popular winter sports in Canada. The Facebook group Bow Valley Wild Ice has over 4,000 members and gets a number of daily updates from around the Rocky Mountains.

So far this season, the most popular lakes for skating have been Johnson and Louise, with dozens still unformed. Over this past weekend, an average of 100 skaters were on Johnson Lake at once.

Lake Louise only just froze earlier this week, and with snow in the forecast there was only one day to skate on its legendary clear and flat ice. 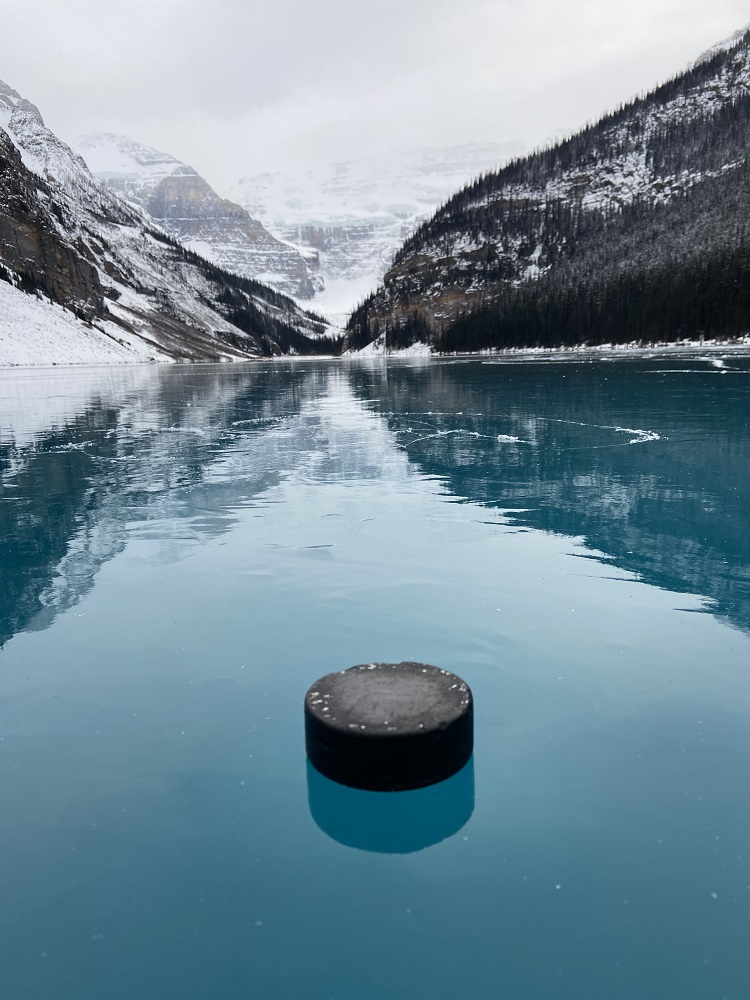 Lake Louise, named Ho-run-num-nay (Lake of the Little Fishes) by the Stoney Nakota First Nations people, is a glacial lake within Banff National Park. It’s a few kilometres west of the town of Lake Louise.

The turquoise colour of the water comes from rocks carried into the lake by melt-water from the surrounding glaciers. Fairmont’s Chateau Lake Louise, one of Canada’s old railway hotels, is located on Lake Louise’s eastern shore.

I’ve skated along the Ottawa River, at Nathan Phillips Square in Toronto, at the Whistler Olympic Plaza, on the Bonsecours Basin in Montreal and on Great Slave Lake in northern Canada, but I’d never seen conditions like on Lake Louise on Nov. 9.

After seeing a post on the Facebook page (like dozens of others), I drove from Banff and parked at the lower lot next to the Chateau. I grabbed my gear and rushed along an icy trail past a few dozen tourists; none with skates.

I rounded the corner and saw the most amazing, flat, clear ice that I’d ever seen.

The lake had only just froze and ranged from 1.5 inches to 3 inches thick, which isn’t textbook safe, but safe enough. I brought an ice screw with me to check the thickness and to use for safety in the off-chance I was to break through.

There were large sections that were not safe to skate on. At least 50 skaters were out before me, playing hockey and executing near-perfect figure skating jumps, like the Salchow.

I laced up and skated out. For the next three hours, I played hockey with new-to-the-area ski hill lifties, old ice climbing partners and new friends from the area.

The ice was so crystal clear that you could see small fish swimming along the bottom next to sunken logs.

I spent most of my time skating along an 800-metre stretch towards the Back of the Lake rock climbing crag along a safe-enough section. It was about 40 metres wide and had only a few perfectly carved skate tracks. The end of the line was at a rift where the ice became too thin to support weight.

From where I stopped, I could spot the classic Louise Falls WI4/5 ice climb, but the full route hadn’t formed yet.

Rising above Lake Louise are big mountains, like Fairview and Victoria, famous for their climbing objectives. Having just paddled on Lake Louise a few months prior, it was a treat having the opportunity to skate across it.

As I drove away, the sky opened up and it started to snow. Over 10 cm fell overnight, covering the crystal clear ice and hiding potentially dangerous areas.

Below is a video of the skate from shore to the end of the line. I quickly realized that I was not in shape for fast skating, and spent the next few minutes catching my breath.

Be safe out there.

Visually inspect the area: Upon arriving, take a look around to see if others have been there. Look for cracks, pressure ridges, dark areas (thinner ice) and slushy areas. Look for open water and objective hazards like rocks.

Measure the ice: The Canadian Red Cross suggests: 15 cm (~5 inches) for walking or skating alone, 20 cm for hockey and 25 cm for snowmobiles. Typically, backcountry skaters will avoid anything less than 7 cm (~3 inches). These guidelines are generic and ice conditions vary from lake to lake.

Measuring in one place is not enough, be sure to take measurements in several different areas to ensure that the entire area is safe. Read more about measuring ice before heading out.

Ice colour: The colour of ice may be an indication of its strength. Clear blue ice is strongest. White opaque or snow ice is half as strong as blue ice. Opaque ice is formed by wet snow freezing on the ice. Grey ice is unsafe. The grayness indicates the presence of water.

Bring a shovel: It’s rare to find backcountry ice that doesn’t have fresh snow or snow drifts. Skate with a shovel to clear and inspect the area as you go.

Bring a headlamp: It can get dark quick and if you’re far from shore or your car, you’ll want to be able to find your way back without relying on the stars.

Wear a helmet: Skiers, climbers, paddlers and bikers wear them, so skaters should too. Get in the habit of wearing a helmet on backcountry lakes. You never know when you’ll catch an edge in a crack or hit a rock and take a tumble.

Wear a life jacket (PFD): If you’re exploring a remote lake or are unsure of the ice quality, then bring a life jacket. More than one skater has gone into the water and lived because they wore one.

Know rescue techniques: Rescuing another person from ice can be dangerous. The safest way to perform a rescue is from shore. Call for help. Consider whether you can quickly get help from trained professionals (police, fire fighters or ambulance) or bystanders.

Bring something to reach or throw to the person (e.g. pole, weighted rope, line or tree branch). When near the break, lie down to distribute your weight and slowly crawl toward the hole. Remaining low, extend or throw your emergency rescue device (pole, rope, line or branch) to the person. Have the person kick while you pull them out.

Self-rescue: If you get into trouble on ice and you’re by yourself: Call for help. Resist the immediate urge to climb back out where you fell in. The ice is weak in this area. Try to relax and catch your breath. Turn yourself toward shore so you are looking at where you entered onto the ice.

The ice is more stable close to shore. Reach forward onto the broken ice without pushing down. Kick your legs to try to get your body into a horizonal position. Continue kicking your legs, and crawl onto the ice. When you are back on the ice, crawl on your stomach or roll away from the open area with your arms and legs spread out as far as possible to evenly distribute your body weight.

Do not stand up! Look for shore and make sure you are crawling in the right direction.

Bring a stove: Bring a backcountry stove to boil water for a hot beverage beore and after your skate. If you’re planning to stay out all day, there’s nothing better than a hot lunch. For a review of the best 2020 stoves visit here.

About Adventures with B: My late friend Anna Smith, who lost her life Himalayan climbing, once said to me after an epic we had in Chamonix, where we got away unscathed: “Adventures with B are messy and unplanned but always fun.” This column will focus on skiing, hiking, SUPing, paddling, fishing and other adventures. A new alpine climb in 2020 was named in Anna’s honour, read about it here.