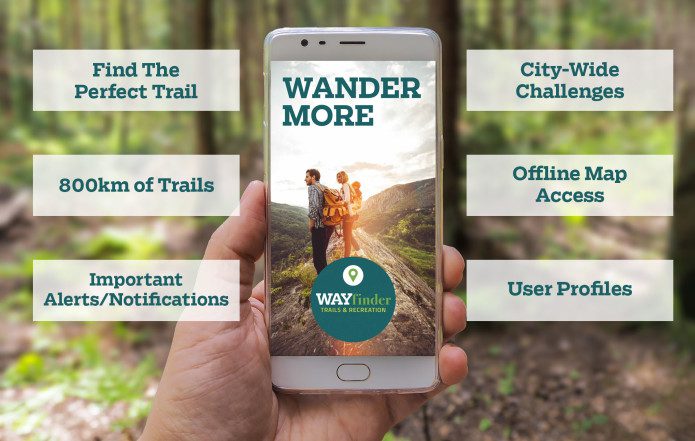 Katherine Couzelis and Graeme Saukko-Sved have developed an app that will highlight over 800 kilometres of hiking trails in northwestern Ontario.

The two are forestry students from Confederation College in Thunder Bay, Ont.

The project was an end-of-term assignment which has become a business idea after their teacher advised them to seek out partners.

“My sister got lost on a hiking trail and I got really worried about that,” Couzelis explained on the CBC’s Superior Morning.

“A horseback rider actually led her to her car and gave her a really awesome map to help her.”

She said that incident sparked the idea of mapping out the hiking trails surrounding the Lakehead University since both enjoy hiking.

“Katherine came out with this idea [and] at first I thought someone has already done that before and then realized, okay, no one has actually done that,” Saukko-Sved said, “so we started collecting maps and making a big map to see where we’re going to go … and it slowly grew and grew from there.”

There had never been one app for the dozens of high quality trails in the area.

So far, according to Couzelis, the pair have mapped out all the trails from the U.S. border to Nipigon and they’ve decided to partner with a local marketing and communications agency to help them develop an app which is expected to be launched in June.

“For the project, we did make a little beta app that we presented to our class, but we looked around for the right partners who could do it better than us,” Couzelis said.

“Basically after we did this project for school, our teacher loved it and he urged us to go see the innovation centre.”

Tourism Northern Ontario is now on-board as a partner and Ontario Parks is providing them with the data.

The app will not only show you all the trails in your area, but it will also provide you with information on what you can expect on the trail, the difficulty of the hike, the distance, names and even the elevation profile.

However in order to make their app a reality, the students are hoping to raise a total of $10,000 through a fundraiser at the Sleeping Giant Brewery as well as a crowd-source campaign called Indigogo.

“We are launching it on the day of our event which is May 2, so next Wednesday [and] this is going to urge the community to get involved and support this app because it is a community initiative,” Saukko-Sved said.

She said for every $10 donated, the two will also plant a tree as a way to give back to the community.