Canada has a lot of backcountry skiing, with world-class glaciers, stunning peaks, challenging terrain and a lot of huts.

If you’re not familiar with a hut trip, they involve multi-day excursions to remote areas and they require more knowledge and gear than a day at the hill. But there’s nothing better than finding untracked slopes, spending time with partners around wood burning stoves, and experiencing all that backcountry Canada has to offer in winter.

So, if you’re planning on heading off-piste and leaving the lifts behind, here are three of Canada’s best hut-to-hut tours.

This is one of Canada’s most popular ski traverses. It traverses between Blackcomb and Whistler ski areas, traversing 13 glaciers and nine passes, and is typically done in two to four days. This is not a beginner tour, as it takes you below and over a number of avalanche-prone slopes.

The route is most commonly done in a clockwise loop, starting at Blackcomb Mountain, traversing the Spearhead range then the Fitzsimmons Range and ending at Whistler Mountain.

Buy a backcountry lift ticket from guest services in Whistler Village. It’s cheaper than a regular ticket (around $50) and you don’t have to carry all your stuff 1,600 m up to the top of Blackcomb. From top of Showcase T-bar on Blackcomb, cross Blackcomb Glacier to the Blackcomb-Spearhead col. Climb over Decker mountain. You can go right over the top to the Trorey-Decker col, or drop down a steep slope from the east ridge of Decker to a lower part of the Trorey Glacier. Traverse around the North side of Mt. Trorey on the Trorey Glacier. 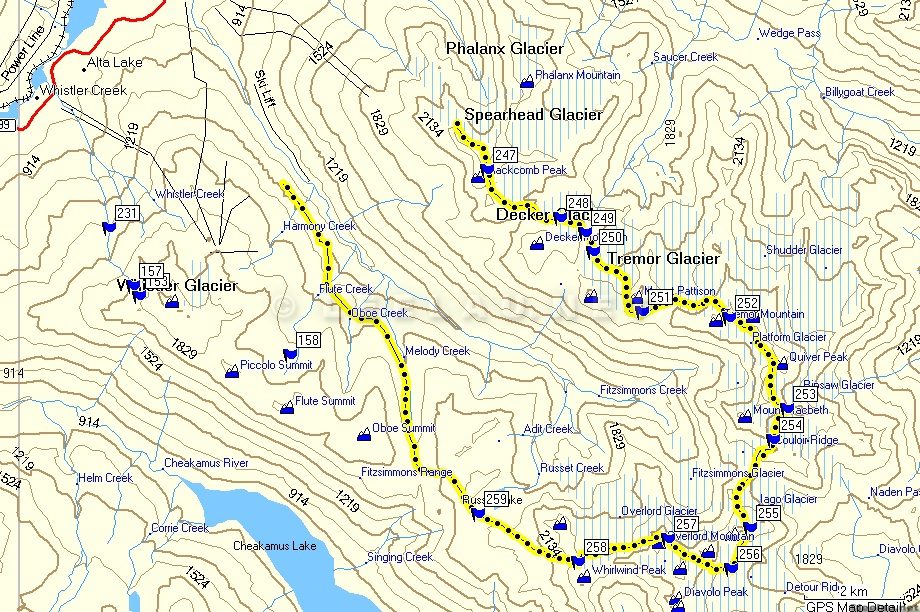 Then you climb over Mount Benvolio and then do a spiralling descent around the north side of Overlord, watch for crevasses. Then either descend Overlord Glacier and climb back to Russet Lake, or cross the Fissile-Whirlwind col and descend to Russet Lake. Head West and descend to Singing Pass.

From there, you ski out the singing pass trail to Whistler Village or ski up over the summits of Oboe and Flute to reach the Whistler downhill ski area and descend the ski runs to Whistler Village. Celebrate your amazing achievement at one of the nearby pubs.

The Spearhead Huts project aims to provide an inspiring and accessible hut-to-hut experience on the West Coast. Located at Russet Lake, the Kees and Claire Hut has already been completed. The remaining two locations have been chosen so that travel time is equal between the three, and they are accessible without having to cross a glacier in summer. Each location will offer dramatic views and excellent recreation opportunities year-round.

The Wapta Traverse is one of North America’s most iconic. The five-day trip will take you to one of the most scenic backcountry ski destinations in Canada. All huts are located high up on the spectacular Wapta and Waputik Icefields along the continental divide. There are a number of premier ski touring summits at each of the hut’s doorstep.

The peaks you can climb along the way rise up to 3,300 meters. You start at Peyto Lake, off the world-famous Icefields Parkway which connects Banff and Jasper National Parks, and will finish on the Trans-Canada Highway just west of Lake Louise. 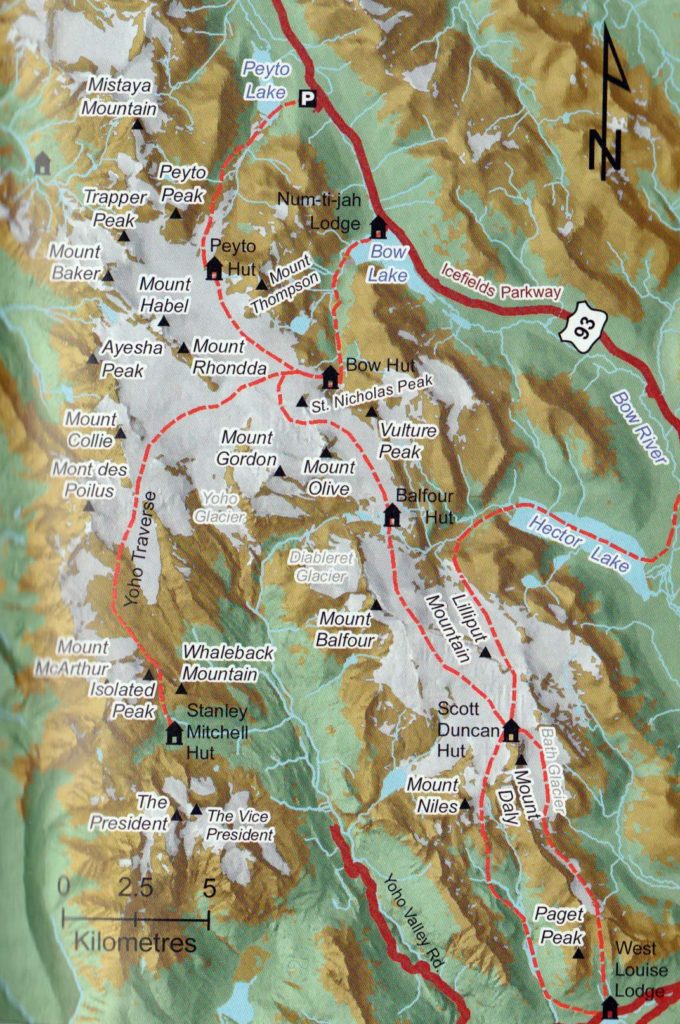 If you don’t have excellent navigation and crevasse-rescue skills, then don’t consider doing the Wapta Traverse. While the skiing is not difficult, you should be comfortable on powder and wind crust.

On May 11, 2014, Peter Knight and Travis Brown took an hour off the record and made the traverse in six hours and 34 minutes. They had great skiing conditions and perfect weather. Brown wrote on his blog, “Overall it was a great day, and snow conditions were almost perfect. As always though, when you finish something big, you always see room for improvement. With the right group and more skintracks in I think it could go in under six hours.”

This backcountry 105-kilometre trail takes you through the Laurentian Mountains and past the Hautes Gorges, some of the tallest rock walls in eastern Canada. While the forests are stunning, the real treat of this tour is the cozy hut you get to stay in every night.

Built in 1978, the Traversée is the oldest long-distance ski route in Quebec. Most groups take six nights and seven days, stopping at cabins or cottages along the way. To make this even more amazing, the non-profit that runs the lodging will shuttle your gear and food between shelters for you. 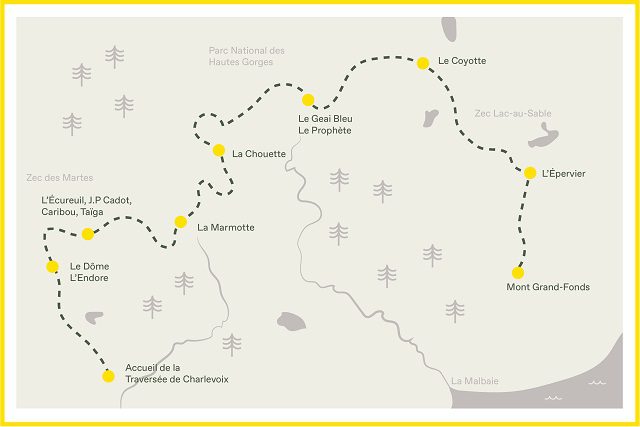 The first day is a four-kilometre ski down an old road to a nice cabin. From here, a narrow trail cuts through tall trees and over ups and downs. The second day is considered the most difficult. As you continue along on day three, the skiing gets easier as you catch a glimpse of the St. Lawrence River and the Laurentians from the top of Montagne de la Noyée, an optional detour.

Day four is the longest of the week with 20 km past Rivière Malbaie, and soon a view into the Hautes Gorges, part of the Charlevoix World Biosphere Reserve. Day five and six wind through enjoyable flats and the snowiest sections of the trail.

The first and second day could be combined to cut a day, thanks to the huts being close. There is also an option to do a four-day, three-night trip.

There are long distances of travel through bush and not all of the trail gets cell coverage. So you should be self-sufficient with minor equipment repair. The trail is well-marked, so navigating terrain is easy. The terrain is pretty easy, but skiing for a week straight, sometimes breaking trail, will take a toll.