Resort and backcountry skiing is booming, and despite the difficult road ahead to approval, a proposal to build a year-round ski and mountain biking area in B.C. got the green light for the next stage of the application process.

The Zincton resort proposal would see a 30-hectare ski village built off Highway 31A east of New Denver in the Valley of Ghosts. David Harley, the lead investor in the Zincton Lift Company, said: “We appreciate recognition of our industry-leading approach to net-positive impact.” The compnay will “divert one per cent of ski revenue to assist in remediating the 120-year-old Retallack mining district, our partnership with Silversmith Power and Light to deliver ‘certified green’ climate-neutral electricity, and our forward-thinking village planning.” 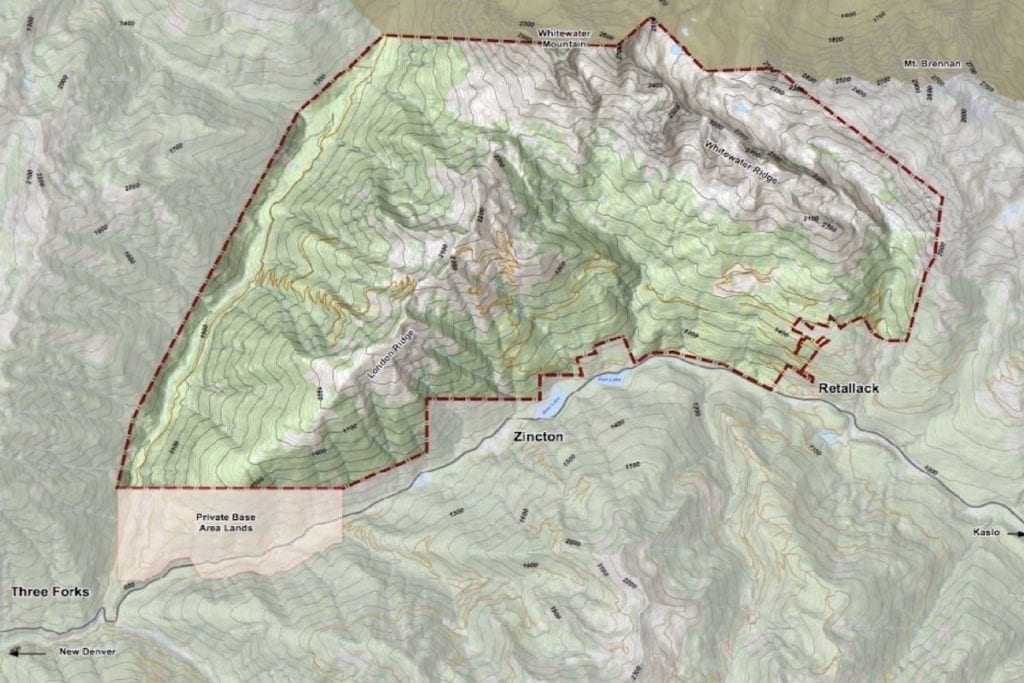 The Valley of the Ghosts was a busy place over 100 years ago, which silver prospectors and entrepreneurs moved to the area. The valley is one of the most famous in Canada for ghost towns. The area is book ended by Kootenay Lake in the east and Slocan Lake in the west, and is linked by the 47-kilometre long Hwy. 31A. The heart of the valley was Sandon, once a city of more than 5,000 miners and their families. Other towns include Cody, Zincton, Nashton, Three Forks and Retallack.

Zincton first appeared in 1892, after an ore body was discovered about five kilometres west of Retallack. It turned out to be predominantly zinc, which was unwanted by the prospectors. The Lucky Jim Group, which owned the site, hoped they would find silver. By late 1903, zinc was becoming marketable and for many years the Lucky Jim mine became the only zinc mine in B.C. It closed in 1959.

In May 2020, the public sent the government’s Mountain Resorts Branch over 3,000 comments for and against the project. “Based on the feedback received from the agencies, First Nations, stakeholders and public during the referral and comment period, the province considers the Zincton proposal to be a feasible concept and has invited the proponent to advance to the next stage of the process and submit a formal proposal,” a spokesperson for the Mountain Resorts Branch said.

They also have to describe their efforts to engage and build relationships with impacted First Nations, including how they will address issues raised by them. The area is prime grizzly bear habitat.

“The all-season resort development planning process is characterized by complex planning requirements and understanding of various environmental, socioeconomic and market conditions,” the government spokesperson said. “The ASRP provides for a comprehensive, progressive, multi-stage resort development planning process whereby each stage informs requirements before proceeding to a subsequent stage. At each stage of the planning process, including a formal proposal, there is an opportunity for public review and comment.”

There’s no deadline as to when the proposal will be devlivered to the provincial government.

Patagonia presents Jumbo Wild, a gripping, hour-long documentary film by Sweetgrass Productions that tells a true story of the decades-long battle over the future of B.C.’s iconic Jumbo Valley, highlighting the tension between protection of the backcountry experience and ever-increasing development interests in the wilderness.

A large-scale proposed ski resort threatens the rich wilderness of B.C.’s Purcell Range, a revered backcountry ski and snowboarding destination with world-class terrain, sacred ground for local First Nations people, and part of one of North America’s most important grizzly bear corridors. Set against a backdrop of incredible backcountry ski and snowboard footage, Jumbo Wild documents all sides of a divisive issue bringing the passionate local fight to protect the Jumbo Valley to life for the first time. Watch here.