Climbing gear has evolved dramatically in the last 40 years. Each decade brings with it new technologies and new brands as climbing moves from the fringe of its youth and into an Olympic sport.

These are six landmark rock climbing shoes that forever changed the way we climb.

In the 1970’s, Boreal pursued a research program aimed at producing a higher performance climbing shoe. They focused on developing the first rubber compound specifically for climbing.

In 1979 Boreal designed the Firé. Made famous in the U.S. by Yosemite climber and free-soloist John Bachar, the Firé helped open the first non-American route on El Capitan. Intrigued, Bachar gave the new Firé a test-run on the classic boulder problem Midnight Lightening. By 1983, Bachar had teamed up with Boreal. Together, they imported 265 pairs of shoes to the Yosemite Mountain Shop. Within the first two hours they had sold every pair.

Following the introduction of the Firé, Boreal became a difficult company to beat. Sticky rubber had truly revolutionized the sport allowing for climbers to move with unprecedented confidence on a variety of rock types. In the wake of their success, Boreal decided to continue to push technology with the introduction of another revolutionizing design. 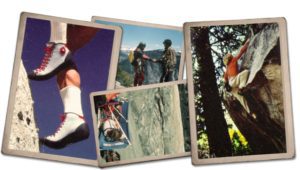 In 1985, Boreal recognized that the board-lasted climbing shoes of the past were good, but their performance was limited. A board-lasted shoe was stiff, edged well, but at the expense of sensitivity. With the introduction of the Ninja, Boreal introduced the first slip-lasted rock shoe. The Ninja also presented the first elastic-closure system, a feature which persists to this day.

Today, almost all rock shoes are produced with a slip-lasted design as tensioning bands make up for the structural performance lost by not utilizing a board-lasted design. The Ninja became, in some ways, the first competition climbing shoe, as it preceded the 1986 introduction of artificially walled climbing competitions. The increased sensitivity gave the climber more feedback when they were climbing and allowed for a greater level of technical footwork.

The slip-lasted design was so popular that La Sportiva took it up in their designs. The first of their rock shoes to reach a high level of popularity was the La Sportiva Mythos. First released in 1991, the Mythos has maintained its original design for over twenty-five years.

What made the Mythos interesting was that it addressed unexplored aspects of climbing-shoe-design. Included in the design was lacing system that wrapped the heel of the shoe. This increased the heel tension and allowed for more technical heel-hooks.

The Mythos also added a rand to the heel. This allowed for specific hooks on tiny edges or ripples in the rock. Such rand design is so common today that it is included on beginner shoes like the La Sportiva Tarantula as well as the high-performance Scarpa Drago. 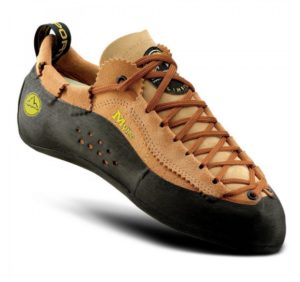 The La Sportiva Miura was perhaps the first instance of the modern climbing shoe. After nearly 24 years, the shoes popularity is almost unbelieveable. Originally released with a fast lacing design, Vibram XS-Edge rubber, and a 1.1 mm LaspoFlex midsole, this highly asymmetric leather shoe was a watermark moment for La Sportiva.

It featured all of the technology previously described in this article, Though the asymmetric design allowed the climber to pull harder with their toes than had previousy been possible. The design was so good that the Miura persisted at the cutting edge of climbing. It was utilized by Alex Honnold for his free-solo ascent of Half Dome in 2012 and Adam Ondra on his ascent of Silence 5.15d in 2018. Today, the Miura comes in a VS model, a low volume model, and a limited-edition XX model. These designs have La Sportiva’s famous P3-band built into the shoe, providing a high level of tension, as well as shape-retention over the life of the shoe.

The La Sportiva Solution was always going to make this list. It originally appeared in 2007 as “the ‘Solution’ to your bouldering problem,” and began an incredible trend. This was the first universally popular, bouldering specific climbing shoe. Through it was frequently used for all forms of conventional climbing, the Solution addressed a rapidly growing aspect of the sport: bouldering.

It featured a molded heel cup, a never before seen feature of the climbing shoe, along with sticky Vibram XS Grip 2 rubber and a highly tensioned P3-band. The molded heel allowed climbers to pull harder than ever on heel-hooks. The thick heel also allowed protection from the rock while under pressure. The heel was also designed to protect the falling climber from smashed heels. The inclusion of the Vibram logo on the bottom of the heel provided bounce and allowed for energy dissipation. For many, the Solution was the only shoe they would ever need. 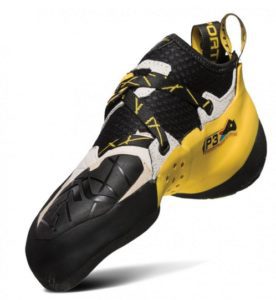 The seven-year-old Five Ten Team was discontinued this past year. Though it could not last a decade, the Team did something that no other shoe could. It offered uncompromising performance.

In its final iteration, the Team climbed with 2.5 millimetres of Stealth’s HF rubber compound. It was not built to last, but instead built to stick to absolutely everything. This specialist shoe began the trend of highly specific climbing shoes that are seen today in models like the Scarpa Furia Air the Tenaya Mastia. It is also seen in the new year’s competition-specific shoe releases.

The soft, competition editions of the Mad Rock Drone, La Sportiva Solution, and Five Ten Hiangle are each uncompromising performance shoes. In this sense, the Five Ten Team was ahead of its time, and offered the market something unprecedented.