Funding issues in Canadian athletics are hardly unique to climbing. Even popular sports, like running and swimming have difficulty supporting their athletes despite their history of Olympic esteem. Programs like Canada’s Athlete Assistance Program (AAP) work to support Canadian athletes, but their are rigid restrictions that limit its ability to do so. The AAP is a national-level program that identifies and funds athletes that have the potential to place within the top 16 of their discipline.

For eligible sports, the AAP offers three types of financial support: living and training allowance, tuition and deferred tuition support, and special-needs assistance. The living and training allowance of $1765 a month for Senior Card athletes and $1,060 a month for Development Card athletes totals to annual amounts of $21,180 and $12,720 respectively.

The lowest annual-gross-employment-income in Canada is found in Saskatchewan at $23,545.60. Such a value is arguably difficult for anyone to live off of and is far more difficult for the athlete who must cover international competition expenses along with other sport related expenses. To compete at the top of the field, an athlete must be able to their life to their sport. Corporate sponsorship can aid in making up the difference between these values, but that presumes that an athlete is sponsored in the first place.

In some ways, it is as though the Canadian top-tier athlete must overcome the odds before the competition even begins. Though climbing was recently incorporated as a National Sport Organization (NSO), a change allowing climbers AAP funding, competitors often find themselves having to take on a great deal of the financial burden associated with the sport.

As such, many Canadian climbers find it difficult to fully commit to competition. Whether they work in the gym or attend class, Canadian climbers frequently cannot afford to put all of their eggs in the climbing basket. For Zoe Beauchemin, this is much the case.

« Gone Climbing 🥳 » ~ I’ll be cheering on the team from afar today! Proud of the fam for killing the finals and sticking thru the 20 hour comp day 💪🏼

Beauchemin climbed for seven years and competed for six. She has trained at a high level since 2017 and competed in the Combined Youth World Championships in Austria the same year. Also in 2017, Beauchemin joined her first adult team, Team Bloc Shop, and began her career as an adult athlete. Today, Beauchemin climbs for Allez Up’s Open Team and attends Concordia University’s School of Business in Montreal.

For Beauchemin, this balance is important even though it is difficult. She says, “Both sports and academics are super time demanding. It can be hard, especially around exam season, to give your honest 100 per cent effort to both simultaneously. By committing full time to both activities you have to readjust your expectations or else you’re destined for failure. At the top of each activity are individuals who focus exclusively on [their discipline].”

This exceptionally relevant problem is faced by many of Canada’s top level athletes. Whether it be school or work, almost every athlete must supplement their income with work outside of their training. How does the athlete allocate their time? As mentioned above, Beauchemin describes the people at the top of their field are exclusively focused on their discipline. Whether that is school or climbing, commitment is key for real success. Athletes like Sean McColl exemplify this point.

Though it is respectable the McColl devoted his life to climbing, it is also appreciable that he took a risk in doing so. Climbing, especially in Canada, is a sport with limited corporate sponsorship and limited AAP support. Part of this issue is due to the fact that climbing companies are generally small, new and specialized whereas older sports, such as running, have massive corporate sponsorships from larger companies.

In Canada, MEC is the greatest corporate climbing sponsor. Over three years, MEC contributed $375,000 to the CEC in support of climbing’s growth. Though this contribution is generous, it breaks down to $125,000 a year for the entire country’s various climbing competitions and competitors. If you think about the fact that there are at least two national competitions and a multitude of provincial, regional, and local competitions annually, it becomes apparent how much more funding the sport needs.

As such, athletes like Beauchemin frequently have other jobs plans for the future, along with climbing. Beauchemin recognizes that she is “lucky to be able to attend university and to afford part-time employment while training throughout the year.”

Even still, she realizes that her other responsibilities take away from her climbing performance. She says, “Throughout the past three years in school I missed classes to travel to competitions, wrote mid-terms and then 12 hours later went to a competition, studied in ISO and then wrote final exams the next day, or even asked to write alternates or to have a redistribution of grades.” What’s more is that her experience is far from unique. Many competitive climbers struggle with the exact same difficulties.

Though Beauchemin is happy to make adjustments to her life to achieve the goals she works for, she also recognizes that it is possible to become complacent in this regard. She says, “I have become comfortable with the workarounds created to mitigate situations where I feel limited.”

She is not unique in this regard. Canada has a history of supporting athletes far less than is likely required for top-level performance. As such, many top-level Canadian athletes approach their sport passionately and individually. Though this effect may not be felt by athletes in highly sponsored sports like hockey, it at least extends to more than one Canadian Olympic team. 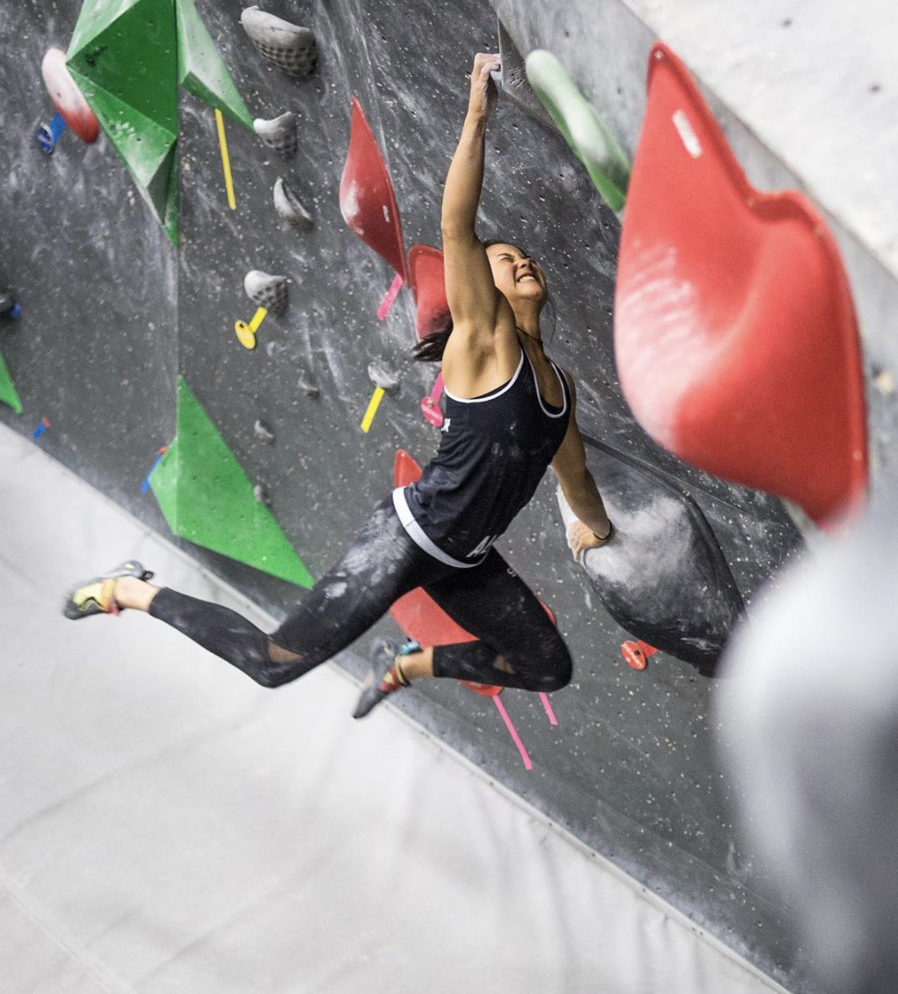 In climbing, Beauchemin believes that some of the greatest limitations are derived from its youth. She says, “We still have yet to prove to the world that climbing is worthy of being broadcast as a legitimate sport and respected as such.” Ideally, this will change, at least in a part, with the upcoming Olympic games, but there is no guarantee. Many Olympic-level sports face under-funding in Canada already.

To help manage expenses, some climbers look to organization like Allez Up’s Open team. Such teams can cover things like gym memberships, coaching costs, and even competition and travel costs. By reducing the overhead, the athlete may not have to work quite as hard outside of the gym to produce results out on the mats.

Beauchemin also credits the CEC for their hard work in the funding of the sport. Their work with MEC is exceptional as is their inclusion as an NSO. Ideally, time will allow support from both of these organizations to grow in a mutually beneficial way.

Ultimately, Beauchemin believes in the future of the sport. She thinks that funding for climbing could originate from many places. She says, “I think the ideal would be a completely integrated system where there are bursary programs by companies (related to the sport) to young athletes.” She adds, “Excellence, I think, will come from cultivating the best of today’s youth and by supporting others at the same level to pursue our climbing as a passion and a way of life. Growth is in the next generation.”