How do you plan for the apocalypse? Perhaps that is a little dramatic, but the sentiment carries through for many of Canada’s small businesses. Among the walking wounded, climbing gyms fight to maintain an air of familiarity, comfort, community and performance all while struggling to keep their doors open and the circuits reset.

Though curbing the second wave is the priority of every climbing gym owner, it is difficult to not feel sympathetic for hard-working facilities which have gifted their communities some of the multi-year, if not life-long friendships many climbers have come to appreciate. 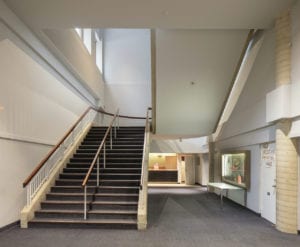 Languay is the owner and founder of Basecamp Climbing. He is 27, he now has two facilities in downtown Toronto, and both offer a unique experience in the city’s climbing gym scene: accessibility.

“At that time, I was living with a few friends downtown. I didn’t have a car, so when I went climbing, I was realizing that when you go it can add up to an hour, sometimes each way. This two- or three-hour session would turn into a five-hour experience, which means everything is super rushed. You get off work, run there, and have a snack on the way.”

“That was sort of an eye-opener for me. It was obviously a problem that a lot of people were having. Having a location that is central makes climbing more accessible. It comes back to when I was kid, when I could have loved being in a climbing program, but there was just nowhere for me to go. It just wasn’t a feasible sport, opening up on Bloor there is already a huge family district there. So many of the kids in our programs just walk over after school because the gym within a five minute walk of themselves.”

Opening centrally may sound like the obvious business move for any climbing gym owner, but, as city dwellers can attest, rent is no small thing: especially on Bloor. Bloor Street is typically defined by the boutiquiest, Prada wearing, Gucci sporting clientele a city could ask for. As you walk west, from the literal Gucci location, the businesses become smaller, but the significance of the street never fades. Even more pressing is the general lack of available square footage. There aren’t all that many warehouses in downtown Toronto.

So how did they end up with their location? Why go through the trouble. Well, it was not Languay’s intention to originally build in Toronto. Though he had spent quite a bit of time growing up around climbing in the city, the natural barriers seemed to high. Enter: Metro Cinema.

The Metro Cinema was the last adult film theatre in the city. The high ceilings, beautiful marquee, and infinity of climbing related porn-puns made the decision all too easy. Location determined, the next step was to build the gym.

Returning to that original point of accessibility, we find Languay in “city hall and giving this deputation, trying to make the gym more accessible for active people to get to. We worked with Mike Layton, the counsellor, and advocated for the bike lanes.” Ultimately victorious, Languay had to decide what kind of gym he wanted to build. At the time he was planning, building and designing, around five or six years ago, bouldering gyms were booming.

Competition climbing had taken off and everyone was excited to get their hands on some fresh, high intensity low balls. So why build a roped gym instead? Languay said, “It leans into the community building for sure. In roped climbing I found the community aspect to be a little more prevalent. You have to have two people to the one wall and it sort of creates that comradery. In terms of building a community I thought ropes might do that a little better than a bouldering gym.” 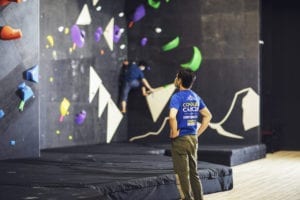 Since their opening, Basecamp Bloor has catered to a number of different kid programs, larger groups, and has worked to provide that community experience. Languay even related that his hiring process is more focused on the conversations he can expect from his staff that from their ultimate climbing ability. He said, “You’ll learn to climb, but your attitude is what I want people to experience when they come in.”

This inclusive atmosphere built around community experience is one that comes from directed effort and hands on engagement. This is perhaps best shown in their building and opening Basecamp Queen West.

Much like Bloor Street, Queen Street West is another downtown hub typically defined by fashion and merchandise, and aside from the MEC, devoid of much other climbing related content. When the Golden Harvest Cinema, ultimately closed down after iterating through several resurrections, Languay would take up the lease for the second part of his climbing gym saga: the bouldering gym. 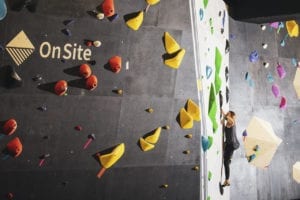 “I have been thinking about the second gym for a long time. When we opened here we decided to include the other gym in the membership cost without raising the membership price. The reason for that is that we are trying to offer, essentially, what a big, mega gym would offer, but in a downtown core. Though we have a limited amount of space, if you want to climb routes and then crush a boulder, you can now do that within a five-minute bike ride.”

“Wherever the space at Bloor was lacking, or where we thought we could offer more to the climbers, that is what we put into our Queen Street location. It is definitely much more training focused, but the way that it is starting to diverge is within its original design. Basecamp Bloor is much more family focused and easy going. However, there are a huge number of climbers that definitely do want to train and that definitely do want to get strong. They have projects in the Glen that they will be training for all winter.”

“I think that we are acknowledging that difference in our sport and trying to cater to it with this new facility. Saying we have climbing doesn’t necessarily cater to everybody. By expanding our offerings, it expands our ability to engage with different communities more often.” 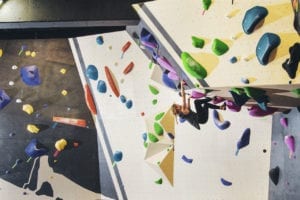 In this approach, Languay describes his desire to build a comprehensive climbing community that might otherwise go unoffered. With tons of collective space, Basecamp does well to offer the climber as much as any mega facility might.

Getting here wasn’t easy, however. For anyone that has existed in and around climbing over this past summer, taking a sabbatical has been tough. Add to that the stress of opening a climbing gym, the opening process becomes a heck of a lot more difficult.

“The past seven or eight months has been an absolute onslaught. It has been pretty exhausting a lot of the time. It takes a toll on you, opening these facilities. Night and day, incoming madness all of the time, but I thought it would be way easier this time around. We got into the space in January, we got rid of all of these movie theatre chairs, and then March hits and all hell breaks loose.” 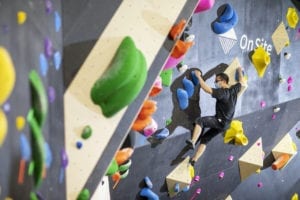 “We had just gotten to the point where we had put up all of the steel, OnSite had all of our climbing walls manufactured and ready to ship over, but the team had to head out because of lock down. I thought about it and realized, with my three years of experience building rock climbing gyms, if they already have the walls manufactured, I am sure I can build the gym down here. I talked to Francis from OnSite, they have been great every time that we have worked with them, and they agreed, it allowed us to get ahead of our schedule.”

“They offered help for figuring out how to assemble the walls and even sent a member of their team who was living in Ontario. We took all of the climbing walls and started building them up. Me and a team of four other people, some of my staff and some of my friends, would come in 12-14 hours a day, every day, for two months. We finished building the climbing walls about August first. We started getting the routes set just before August hit. We finished just as we were allowed to open.”

How Languay felt through the process is difficult to describe. “It’s hard because it is positive and negative. Not having to run Bloor, in this period, allowed me to build Queen West. Building climbing gyms is something that I love doing, so having another opportunity to build climbing gyms was a real positive experience.” 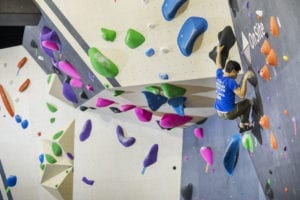 “Burying myself into a project while the world was on fire was good for my sanity as well. It was a really great experience actually being able to build the walls and put all of my time and energy and stress into a project.”

Though the operational side of things has been a challenge in itself, Languay related the joy he felt in being able to welcome his community back to a brand new facility.

“We had the first week dedicated to the Indiegogo members. You make so many friends and being able to see them after a shutdown for that long was awesome. Being able to see people who had shown their support, made such a huge difference. You put your heart into something and only when it opens do you see whether people are coming and whether they are going to enjoy it.”

Though every climb gym owner puts their heart and soul into their work, the sheer amount of literal construction Languay put into his facility speaks volumes. Though it is incomparably difficult to manage the financial stresses of this time, Languay looks forward to the future improvements that will be made to his facilities over time.

Languay concluded with a smile, saying, “There are massive financial stresses and issues and it gets very scary a lot of the time, but the light at the ends of the tunnel is really positive. For myself, personally, I am looking forward to climbing more. For the first time I can rock climb in months. During the shutdown, I got to climb more than I have in a long time. Falling back in love with it has been really nice.”

So how can we help? Well, no matter which facility you attend, many could very much use the assistance of your continued membership. For many, this cost is simply too high in a time where more people are out of work than ever, but if you have the means, your support means the world to these small businesses.

In the increased commercialization of indoor climbing, it can be easy to forget the climbing gyms, largely, are owned by people instead of corporations. Owners give their everything to provide an exceptional experience for their member base and, even now, work to engage their communities. If you want to support Basecamp specifically, and get a little love in return, from now until November 30, Basecamp is offering 10% off their retail and prepaid memberships. Now more than ever, climbing gyms need our help.