Climbing gyms are open, but with COVID regulations in place, the gym is not what it used to be. In some ways this is nice. Quiet sessions may allow for a more meditative climbing experience and fewer queues between routes. However, one point of consternation has been the elimination of loose chalk and the inclusion of liquid chalks.

What should you buy?

If you have ever seen a competition climber rubbing liquid chalk into their hands, there is a good chance that it was Mammut. This stuff is easily one of the best liquid chalks on the market. What makes it so ideal is the shear alcohol concentration. The drying effect is substantial and can allow for some seriously radical burns on route. The tube comes in both 100ml and 200ml versions. Though Liquid Chalk is certainly more expensive than regular loose chalk, you do not have to use as much of it if you are tactical with your application. Try rubbing in a base coat at the beginning of your session to remove the excess oils from your skin. Though all liquid chalks are meant to be used with loose chalk, this one climbs well regardless. You can get the 200ml tube for $10.63 from Alpin Store. 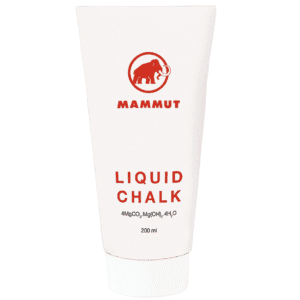 The Secret Stuff from Friction Labs pursues a slightly different direction than Mammut. Instead of an aqueous solution, the Friction Labs product is more of a cream and excels on low friction holds. It dries on thicker than Mammut’s liquid chalk, but sticks to the skin much longer. At 80% alcohol concentration, it is the world’s first Hygienic Chalk.

If you are climbing in a gym with high-friction holds, you may not notice a difference in its durability compared to Mammut, but if you are climbing on classic polyurethane, it should stick around a bit longer.The drawback with this chalk is the cost. Friction Labs’ high quality comes at a price. At $19 USD for 75ml, you are spending a lot if you are using this chalk. Of course the increased durability might make it worth it. If you climb primarily on a board, like a MoonBoard or spray wall, this might be the perfect chalk for you.

If you already have dry skin, the above options may not seem very attractive to you. Mammut Liquid Chalk is made of over 75% alcohol while the Secret Stuff from Friction Labs brings with it around 45% isopropyl alcohol. Either concentration can be a lot for someone with easily irritated skin or particularly dry skin. As such, it might be worth trying the alcohol-free Secret Stuff. It still comes complete with a high density of Magnesium to increase your grip, and keep your hands dry. With that said, if you have sweaty palms, this will not dry your hands as well as the alcohol-based version. It is also $19 USD for 75ml. 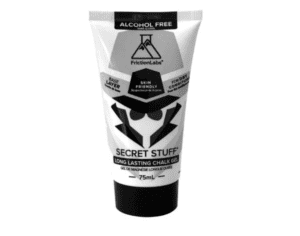 If you are looking to try something a little out of the ordinary, look no further than Tokyo Powder Industries Boost. Perhaps one of the most underrated condensed-chalk products, Boost is granular, high concentrate chalk that feels like glue when it is applied to clean skin. For $25.50 USD, you can get two packets of this chalk type from So iLL, their distributing partner. It is a unique chalk that should theoretically last a long time by virtue of the fact that one or two pebbles are enough for an application.

That said, it is pretty addictive and you may find yourself using more than the prescribed amount. The drawbacks with this chalk are that it takes a second to get used to and it comes on to the skin like a wax. For some people it may feel worse than regular liquid chalk. It benefits greatly from an additional layer of loose chalk over-top its base layer. That said, on low texture holds it is much like glue.

Looking to buy Canadian? If you are willing to drop $69.99 up front, Tembo will send you 1000ml of liquid chalk in addition to two free 50ml, refillable dispensers. For those that are sure to burn through large amounts of liquid chalk, this is easily the best value for your money. If, however, that $70 price tag is too steep, you can get a 500ml bulk bottle for a more affordable $44.99. This package comes complete with one 50ml refillable dispenser. With an alcohol content of 70%, this liquid chalk will dry your hands, while the fine grain of tembo chalk will ensure solid sweat absorption.If your facility is currently liquid chalk exclusive, this product is highly recommended. 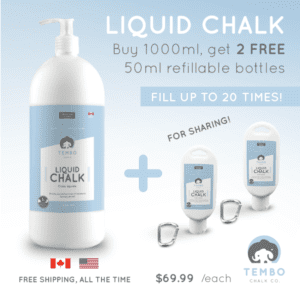