After three rounds, Brixen’s best took to the World Cup stage for one last round of bouldering. The high-top competition brought the leaders within attempts of each other, as all the pressure mounted on the final boulder problem.

Japan’s Serika Okawachi climbed her best competition this weekend. Despite her ultimate sixth place result, she concluded her event having achieved her first Boulder World Cup semi-final and final, beating her previous best by 21 spots. Okawachi has not improved on the Boulder World Cup circuit since 2016, but also abstained from the previous 2022 Boulder World Cup events. Today she showed just how much she has improved since her last appearance in 2019.

Fighting all the way to the end, the Japanese competitor threw herself at W4. The dynamic double-/triple-clutch paddle sequence gave her trouble, but after finding her pacing, she nearly climbed it to the top. In the end she needed more time. Regardless, she established her contentiousness in this internationally competitive field.

Her teammate Anon Matsufuji had a similar jump in result during this weekend’s competition. The 18-year-old had previously struggled to make it into a semi-final in her debut year, this year, on the World Cup Circuit. To her credit, Matsufuji improved in each World Cup she participated in, leaping from 49 in Meiringen to 39 and then 21 in the sequential Salt Lake City World Cups.

Today she finished fifth with a heroic Top on W3. Despite the difficulty of the boulder problem, Matsufuji fought through fatigue to cling to the finish. If she competes again this season, her result could show her to be a future Japanese great. Such marked progression this season is only replicated by the Japanese Olympic silver medalist  Miho Nonaka.

After a dominant semi-final, Nonaka could not quite keep it together through the last rounds. Despite her earning four Zones, she fell on the slab and struggled to power through the long W3. Still, she retained a podium position throughout these climbs and only fell off when she could not finish W4.

After floating the triple-clutch, Nonaka struggled to pull hard on the left heel. It seemed as though she were almost afraid to weight her knee. Although it is unclear whether an underlying injury was present, Nonaka found a way to sink the hips and move into the vertical dual-tex razor blade. Although she topped, she could not do so in time to earn the point. In either case, she had used too many attempts to earn the podium.

After all, Zhilu Luo did not give Nonaka space to make mistakes. The Chinese 16-year-old sprung on to the World Cup scene with no previous international IFSC experience. Today she was the ultimate dark horse, with even less known about her than the relatively unheard of Matsufuji and Okawachi. Luo, despite her age, inexperience, and solitude as the only Chinese competitor in semi-finals and finals, climbed with the experience of a veteran athlete. She secured two Tops on W1 and W4, showcasing her strength and flexibility. If the 16-year-old has a weakness, it appears to be in big moves, but the climber is so incredibly flexible that even this does not appear to slow her. It is difficult to overstate how well she did today. A bronze medal at 16 in a debut competition is the sort of thing expected from climbers who turn into field-leading athletes.

But not even Luo could outclimb Germany’s Hannah Meul. In fact, in finals, not even Grossman could out climb Meul by more than a single attempt to Zone. After flashing W1 and W2, Grossman was under pressure to Top her remaining boulders in as few attempts as possible. Meul’s lead held through boulder two, but after an early slip on W3, she reopened the door for Grossman to take the lead.

The two athletes leap frogged through W3 and W4, only surpassing one another by attempts. In the end, Grossman held it together to secure gold, but Meul walked away with silver in her first ever Boulder World Cup final. Although the German 21-year-old has most often climbed in Lead, she has transitioned into bouldering in the last World Cups, edging closer to the top of the field. Today’s performance was exciting. It will be interesting to see whether she can retain consistency across rounds. 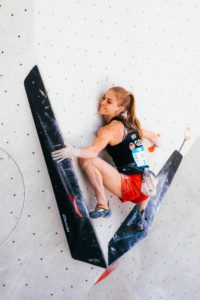 Finally, American World Champion Natalia Grossman showed that value of her title. After losing her lead, Grossman set her sights on bullet-proof attempts-to-Top. She only slipped once on W4 after losing the lead on W2. Grossman not only executed what became her fourth consecutive gold medal performance, she also flashed both the qualification and semi-final rounds of the competition.

She missed out on flashing the entire competition by two attempts. Grossman’s consistency is impressive, but what is shocking is the increasing number of people that appear capable of challenging it. Part of this might be due to a more relaxed setting style, as we saw in Salt Lake, but in Brixen, the separation was strong. Meul and Grossman out climbed their competition by two Tops. That is a massive difference.

It seems then that the level of the top of the field is simply increasing. It will be exciting to see Grossman battle Meul, Brooke Raboutou, Janja Garnbret, and Oriane Bertone in a final. To that end, Garnbret is rumoured to be signed up for Boulder in Innsbruck. This event will carry both Lead and Boulder events. Still, whether she will compete remains unclear.