Dry hands can mean the difference between clipping the chains or walking away disappointed. With all of the chalks on the market, it can be difficult to know what defines one from another. From chalk balls to chalk paste, here are the five common varieties of power flour. 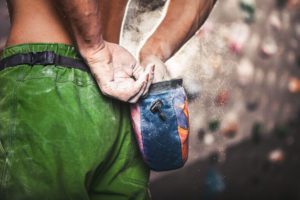 The chalk ball is a unique applicator that is most commonly used inside the gym. Frequently criticized for its poor skin application and its relative absence of grip, you may wonder why it has been brought up for review. Well, the chalk ball is versatile. Whether you need to quickly chalk holds or reduce the amount of air-borne dust, the chalk ball is effective and difficult to replace. A loose chalks spills and seems to require a relative amount of mess. For the climber with a home wall, the chalk ball allows for easy breathing as well as ease of use.

All of the chalks on our list are variations of this bad boy. Best represented by brands like Flashed and Metolius, loose chalk tends to be cheap, high volume, and dependable. The difference between these two chalks, specifically, is the inclusion of additives. Where Flashed is additive free, Super Chalk boasts a drying agent that may or may not help with the climb at hand. Personally, I like Metolius because I have horribly sweaty hands. For me, it dries them throughout the session, allowing for harder and harder skin from one day to the next. The downside of the drying agent is that dried-hard skin splits. Flashed, by comparison, does not hinder the climber in the same way, but it also doesn’t lend any advantage. It is a good inexpensive chalk, but it wipes away quickly and doesn’t seem to dry the hands. Instead it seems to cover the sweat with a film of dry powder. 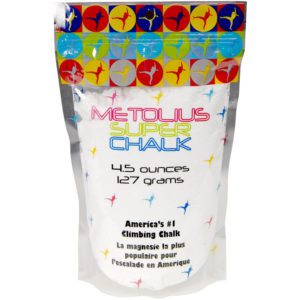 This new-age of rock climbing brings with it the new-age of chalk. Friction Labs is the best example of this shift, featuring a hefty price tag and a popular product. The difference between high- and low-end chalks is in the mixture of magnesium and calcium carbonates. According to the Friction Labs website, “Magnesium Carbonate traps water molecules on the inside of the crystalline structure, leaving the surface dry.” Calcium carbonate serves more as a base for chalks and offers limited potential grip. Each of the three textures offered by Friction Labs features a higher percentage of Magnesium Carbonate than any other chalk on the market. This isn’t to say that there are not trace additives in it like other chalks, but it does dry your hands for a longer period of time. It is more than a placebo effect. A high concentration of magnesium carbonate makes a massive difference.

Popular among competition and outdoor climbers alike, liquid chalk takes the concept of drying your hands to another level. Effectively a combination of rubbing alcohol and chalk, this paste is rubbed into the hands as a base, reducing the amount hands sweat. Similar to high-end chalk, it is easy to wonder whether or not this makes a difference. I was skeptical for years, but the high-priced liquid chalk works. For me, Mammut is the best liquid chalk on the market. It dries the hands and slightly hardens the skin, providing a great base to apply regular chalk over-top. This combination allows the climber to finish the route with dry hands, reducing nervous slips that can cost you the send. 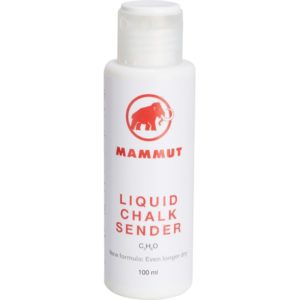 Liquid chalk is an example of a primer that effectively creates a dry layer between your skin and the chalk. Though liquid chalk is how a primer is often expressed, Tokyo Powder’s Boost flips the script with a more gelatinous mixture. Similar to a sticky feta-cheese, Boost seals your hands before each burn, allowing for consistent attempts from the start of your project. When used with chalk, it feels almost like glue, inspiring confidence in the climber. Unfortunately, it is expensive and is gone through at a much higher rate than liquid chalk.