It begins with a legacy. Although many outdoor brands have proved themselves over time, few climbing shoe companies have persisted for decades. Since its inception, Boreal produced high-end climbing shoes each built to push the limits of climbing shoe technology.

By 1979, Boreal released the Firé. In some ways, this became the first performance climbing shoe as Boreal designed it with sticky rubber for free climbing. American free-soloist John Bachar fell in love with the Firé inspiring a partnership that would push the shoe into the world’s fastest developing free climbing scene. Boreal became the best climbing shoe company in the world.

Six years later, the Spanish company released yet another world-changing pair of climbing shoes: the Ninja. This shoe became the world’s first slip-lasted climbing shoe. Inspiring the design of all slipper-like climbing shoes to follow, this soft and sensitive climbing shoe would show  why climbers like Ben Moon, Wolfgang Gullich, and Lynn Hill all climbed in Boreal during their careers. Few brands have such a storied history of first ascents.

Today, that story continues through the Boreal Satori. This new flagship from Boreal offers the advanced climber a powerful toeing platform designed to push the athlete to the next level. Its sensitive sole works with this toe to make the Satori a multi-faceted solution to the climbing shoe problem. 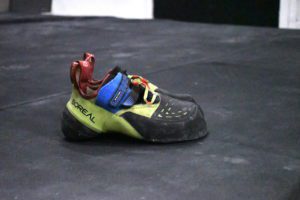 It begins with the rubber. Unlike some climbing shoes, Boreal’s Zenith Rubber provides a sticky platform that is stiff enough to stand on small edges. This combination makes it an excellent option for outdoor athletes. It is most ideal for limestone-based climbing, such as that around Ontario, B.C. and Alberta. Ontario climber Joe Skopec used Boreal shoes to complete his hardest first ascents across the province. What makes it so good on this rock?

First, the hooked toe latches on to the small incuts of limestone climbing. This allows athletes to pull with their feet, retaining tension through numerous hip-shifting hand sequences. The soft rubber adds to this advantage requiring less core strength than less downturned climbing shoes.

Although the soft rubber wears quickly, each pair comes complete with an enormous 4-4.5 millimetres of compound. The thickness of the rubber varies with the size. This thickness allows for precise edging, right out of the box, without losing the sensitivity that many have come to expect from high-performance climbing shoes. With that said, the sensitivity only comes after the three day break in period.

While the rubber offers the climber a strong edging and pulling platform, the Satori’s shape is its strongest feature. The chisel-shaped toe-box knuckles to provide power while maintaining comfort under stress. By shaping the forefoot in this way, the knuckling of the forefoot compounds with the soft rubber of the toe-patch for optimal toe-hooking. In building this plyable upper against a firmer outer last, a cup forms behind the knuckles to make most toe-hooks easier.

Furthermore, the hooking remains sensitive. Often times, this sort of knuckling results from too much material. Too much material can make a shoe feel clunky. The Satori circumvents this issue.

Although most anyone can find a reason o love the Satori’s toe-box, the heel requires a little getting used to. It is excellent inside, but struggles to precisely hook small gibs outdoors. With that said, it is the most sensitive round, molded heel Gripped’s editor had ever tried. Still, molded heels provide less sensitivity. The trade off comes from the amount of power the climber can place through the heel.

The Satori lets the climber pull hard without feeling the pain of hooking uncomfortable features. This definitely has its advantages. To that effect, the second strap secures the top post strap secures the heel in place, ensuring that the heel does not slide.

This point segues into the velcro-based lace-up system featured in the lower strap. A braided lace threads through fabric loops to secure the forefoot. The fabric materials of this strap reduce the stress on the strap, increasing the durability of the fast-lacing system. Often, fast-lacing systems pass webbing through metal loops. These loops crease the impliable webbing ultimately leading it to break.

Due to the Satori’s two-strap design, in addition the the fast-lacing system of the lower strap, the Satori’s fit is customizable. Although it does appear best for the wide-footed climber, the lower volume Women’s model allows narrow footed climbers a second option.

In either case, climbers can take solace in the stretchless nature of the shoe’s design. The bullet-proof construction of the last and rand helps maintain the molding of the forefoot and the general downturn of the pliant midsole. Each of these components make the Satori a sustainable climbing shoe that should survive at least one resole.

Indoors, the shoe climbs well. The Satori is receptive to the many manners by which athletes use their shoes to climb inside. Its lateral stiffness make it strong on heel-toe cams while the hooked toe lets the climber pull very hard on very sloping feet, even when they are far away. Although the toe is strong on a board or home wall, the heel is a bit wide for the MoonBoard. On the Tension Board, the large grips remain accessible to heel hooking, where on the Kilter Board the hooked toe on the large in-cut grips provides a powerful solution for toeing in.

In the end, it climbs well. After over 100 boulder problems in these shoes, the soft rubber has only begun to wear. It will take a long time before this pair ever needs a resole. Buy it here for $200 CAD.