Climbing gyms and fitness facilities underwent severe economic hardships over the last 18 months. While many worked hard to maintain their communities, the fear surrounding recreation in enclosed spaces and the difficulty of retaining staff through lockdowns provided cause for concern: What if the Delta variant causes the country to shut down again? 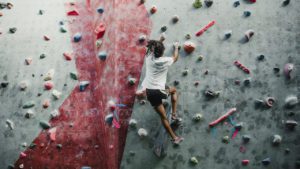 In the U.S.A., Virginia Representative Don Beyer co-sponsored H.R.890. The bill asks Congress to allocate resources for gyms and fitness facilities across the country. Two weeks ago, Beyer joined professional climber Sasha Digiulian, Sport Rock President Lillian Chao-Quinlan, and the Access Fund’s Chris Winter to discuss the bill. Paula Horowitz moderated the conversation, which began by describing the need for the bill.

Beyer began, stating that gyms were hit harder than almost any other industry during the pandemic. He said it’s on the parallel with restaurants. Beyer said that people originally felt fear in returning to some of these intimate facilities, where patrons breathe heavy and sweat. He continued that patrons should return to gyms, despite this fear.

“There is this enormous need for us to get healthy again so that we eventually get out of this pandemic,” said Beyer. “We just saw American life spans shorten again. It’s a terrible thing, and it has everything to do, not just with the pandemic, but the ways we get the chance to exercise and nurture our bodies. This is a big step in the right direction.”

Beyer continued by mentioning that some gyms might lose their financial viability should they not receive support from the government. Chao-Quinlan confirmed this sentiment in her description of these last months. “I would say that my story is not unique, in that so many of us gym owners went through a similar journey. I have nothing but the most respect for gym owners who had to navigate through something so unknown.

“Before the pandemic, our gym was doing very well. We are one of the oldest climbing gyms in the country. We have been around for 27 years, constantly evolving, constantly keeping up with industry standards, constantly trying to innovate and do new and exciting things. Rock climbing has become one of the fastest growing sports… Then boom, the pandemic hit.

“I think for a lot of us it was quite a shock, just slamming on the brakes and stopping and really looking deep into what your company is about. One of our main priorities was to take care of our employees. I have always been steadfast that they are the ones who make the company what it is, so I quickly applied for two PPP loans: a grant that was offered generously by the city of Alexandria.

“For me, I was very fortunate to be able to pay all of our employees during our three-month closure. I did not have to furlough or lay anyone off. That said, we had no programs, we had no need for employees. That was really hard.”

Chao-Quinlan went on to mention that the PPP loans she applied for will run out. Without the Gyms Act, further closures from the Delta variant would make it difficult for her facility to maintain its employee-base. While many in her community continued to pay their memberships despite gym closures, she wonders how much she can expect going forward. Although programming gets cut, costs remain even in a closure. This is how the Gyms Act could help.

At its core, the Gyms Act is simple. The bill authorizes the Small Business Administration to make initial and supplemental grants to privately owned fitness facilities that primarily provide health or fitness services. This does not include golf, hunting, fishing, or sailing, or riding facilities. The total funds a recipient might receive extends to an upper limit of $25 million. The recipient must use these funds for payroll costs, rent/mortgage payments, or other necessary costs.

The Gyms Act could have a beneficial impact on the gym scene in the United States. In Canada, similar support could go, and has gone, a long way. Considering that many climbing gyms could not afford to pay their workers over the time the facility closed, even with the Canada Emergency Wage Subsidy (CEWS), losing any resource before the pandemic concludes could have significant effects in Canada. The CEWS is currently set to expire on Oct. 23, 2021.

As the Delta variant ramps up, Canadian climbing gyms might once again find themselves at risk. Perhaps Canada needs a bill like the Gyms Act.

The issue with the bill comes down to cost. Many conservatives do not wish to push the bill forward as it will cost the country money. It arguably becomes a question of allocating resources or spending, even though national debt will accrue. In both Canada and the United States, such bills run into this problem.

While debt sounds scary, national debt and personal debt differ from one another. Internationally, there is more debt than currency. As such, it is impossible to eliminate all national debt. Instead, it can only be kept at a responsible level to not default on a loan. In anycase, eliminating debt and maintain debt in a responsible level have differing levels of associated spending. The money exists, it just becomes a question of how it could be spent.

At such a point, the question becomes one of necessity. Does the Gyms Act needs to exist? Because businesses would have to apply for the grants offered under the act, and the act would work only to keep the business afloat for the sake if its employees, and that the $25 million cap is a limit and not the initial value of the grants distributed, the Gyms Act would exist as a preventative measure. As such, it would only need to exist for those facilities that needed it. Gyms that can operate without the grant will not receive funding.  Its only purpose is to help small business owners and their employees.

Winters concluded the conversation with a direct statement regarding the importance of climbing gyms within the sport’s community. “Climbing gyms are really having a measurable impact on creating and promoting diversity in the climbing community, which is a real benefit to all of us.”

As new generations of climbers begin to enter the sport, the propensity for beginning in gyms will increase. It’s where new climbers now begin. Promoting the Gyms Act through contacting representatives in the United States can help pass this bill. In Canada, the CEWS (Canada Emergency Wage Subsidy) provided climbing gyms and other small businesses with some of the funding that they need. Ensuring it continues through the fall, as COVID cases rise with students back in classrooms, could become essential to keeping or favourite climbing gyms open.