If you just started climbing, you might be wondering why everyone is using chalk.

When you’re in a climbing gym or outside at a climbing area (often called a crag) you might notice that everyone has a little bag clipped to their waist that hangs off their back. Those are called chalk bags and they’re full of chalk.

Chalk is something used to absorb all the moisture that’s on your hands to keep them nice and dry to provide better grip.

Everyone’s body produces moisture differently, so some people need to reapply more than others. Most reapply at the start of each attempt and possibly again before a particularly difficult move in the middle of an attempt.

Most chalk is made from magnesium carbonate, the same compound that gymnasts, weightlifters and other athletes will put on their hands in order to improve friction and grip.

Though chalk it is sometimes available in other colors, it’s usually white.

Everyone from new to pro climbers use chalk and chalk bags. Climbers who only boulder bring chalk in big bags they leave on the ground, while climbers heading up on a route where a chalk bag. 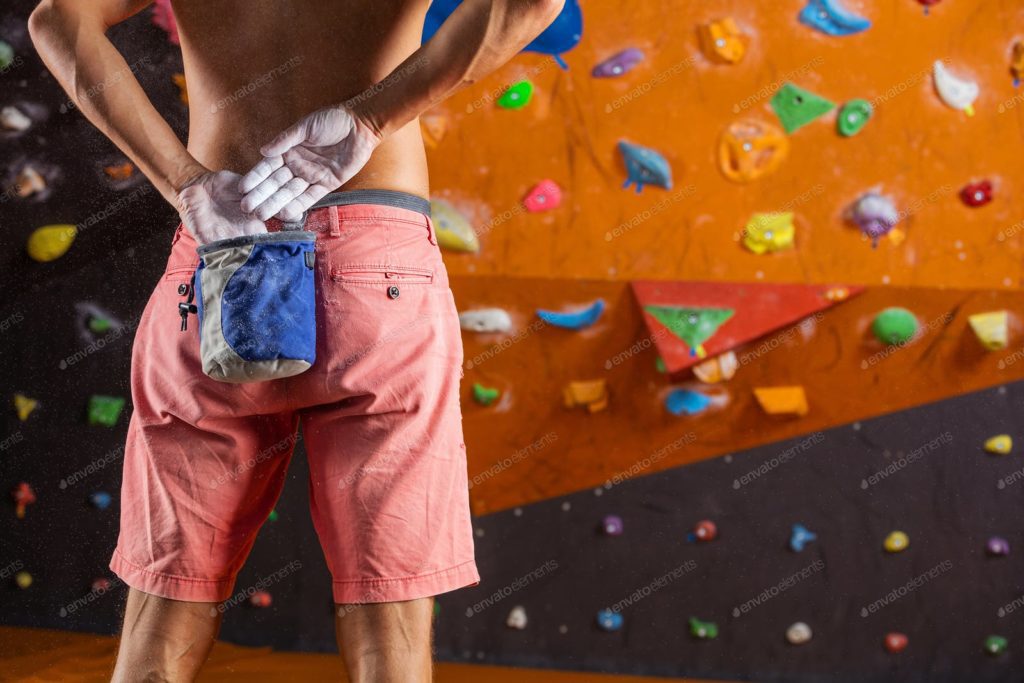 Chalk is probably one of the most integral tools for a climber. There are a lot of different kinds and brands of climbing chalk that may differ in texture but all to serve a common purpose of keeping your hands dry.

It’s one of those things that many climbers can’t climb without. Chalk can help give you the confidence to grab that next hold.

Chalk commonly comes in a few different forms: block, loose, or liquid. Which one you use is a matter of personal preference.

Applying too much chalk reduces the friction on your hands, so only put on a small amount, rub it in and blow off the excess.

Chalk bags come in different shapes and sizes and you can wear them with a strap and buckle or just by clipping it to your harness.

If you’re at a climbing area, you might notice chalk is used to mark certain holds on a climb. These small chalk marks are called “ticks.”

They make it easier for climbers to know where to place their hands and feet. They are often frowned upon, so don’t start adding them until you understand what the rules are for a certain area.

Take a conservative approach to your chalk and treat it like powdered diamond.

Use it sparingly to make it last longer and to avoid suffocating yourself and others in the climbing gym.

As the chalk brand Friction Labs notes, “The more you learn about the surprising finesse required for efficient chalk usage, the more well-rounded you will become as a climber.”

Climbing chalk comes from magnesite which is MgCO3 mixed with iron (II) and carbonate crystals. Magnesite is heated to get rid of the iron and carbonate, but the heat doesn’t break the bond between the magnesium and the carbonate because it is an ionic bond.

An ionic bond is a bond between two oppositely charged molecules, and is extremely hard to break apart. Once the magnesite is purified of the iron and carbonate crystals, it is in a solid block. The block can then be used in the block form, or it can be crushed up into finely crushed powder.

Because MgCO3 is insoluble in water and sweat is manly water, MgCO3 will keep hands from getting sweaty.

How Not to Use Chalk: