Last year crowned the first Youth Olympic champions of Sport Climbing and all eyes turn to Tokyo in 2019.

There were 42 game changers shone in the spotlight of the first Youth Olympic Games for Sport Climbing in Buenos Aires, the most digitally-consumed edition in the event’s eight-year history.

Standing atop the podium beside teammates Shuta Tanaka (JPN) and Laura Lammer (AUT), Sam Avezou (FRA) and Vita Lukan (SLO), Japan’s Keita Dohi and Sandra Lettner of Austria capped-off a memorable chapter in the sport’s Olympic journey. After qualifying at home in Innsbruck, Lettner brought back a gold medal to Austria, also host last year of the IFSC World Championships. Dohi extended the Olympic legacy of Japan in Sport Climbing, winning gold two years before the Olympic Games in Tokyo.

2 months until the start of the climbing season! Both the #IFSCwch and the #IFSCwc series carry extra weight this year on the #ClimbToTokyo. Full calendar at ifsc-climbing.org! 📷 @thecircuitclimbing

“Sharing the podium with Laura was a dream come true, for us and for climbing in Austria,” said Lettner.

“I’m delighted with the result and I’m also happy because we created a good impression as a sport,” said Dohi. “Sport Climbing is going to be recognised in Japan. I hope everyone comes to see it at Tokyo 2020.”

This year, Sport Climbing qualification events begin for the Olympic Games Tokyo 2020, the first in the sport’s history. Traditionally held biannually, the IFSC World Championships will take place again in 2019 in Hachioji, Tokyo. Bouldering, Lead and Speed climbing performances will set the stage for the expanded Combined finals, the first qualification event.

The IFSC World Cup series will also carry extra weight in 2019. Top athletes in the Overall World Cup ranking will earn a spot at the second qualification event in Toulouse, France. Meiringen, Moscow, Chongqing, Wujiang, Munich, Vail, Villars, Chamonix, Briançon, Kranj and Xiamen all appear on the calendar again, and the season will conclude in Inzai, Japan. View the full Tokyo 2020 Qualification System, and the provisional 2019 calendar can be found at ifsc-climbing.org and above.

“2018 was certainly a golden year for Sport Climbing. The sun has set on our debut at the Youth Olympic Games, but another one rises as the climb to Tokyo continues in 2019. Let’s keep journeying together, as one community, to make the most of this new chapter,” says IFSC President Marco Scolaris. 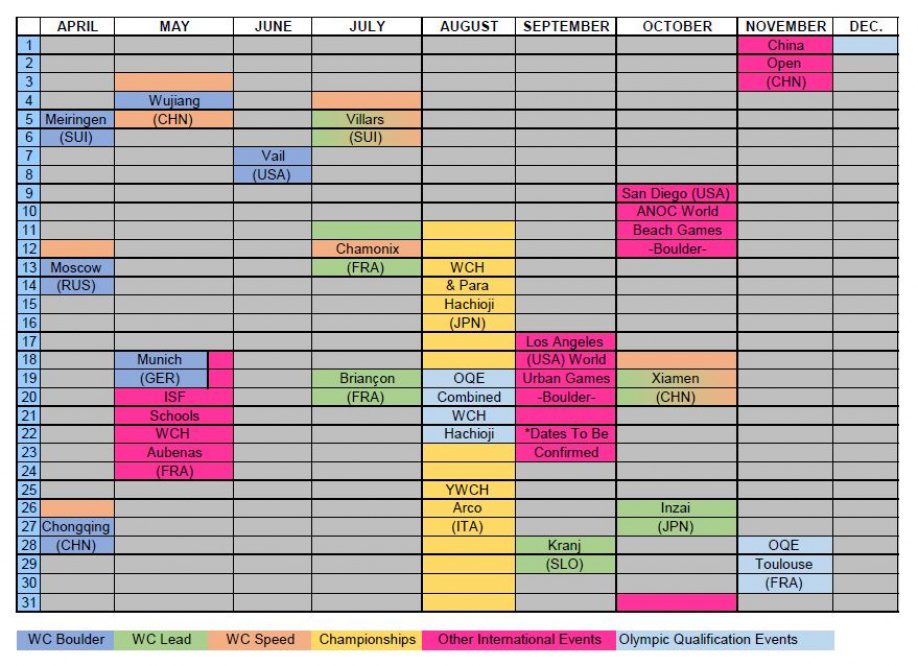