Between countless questions, rule addendums and global anticipation the International Olympic Committee (IOC) and the International Federation of Sport Climbing (IFSC) have worked alongside Japan’s Federal Government and the Japanese Mountaineering and Sport Climbing Association (JMSCA) to get history’s most expensive Olympic Games onto the monitors of the world’s sports fans.

At times, it appeared that climbing’s Olympic debut might have to wait until 2024, but, with only 15 weeks until the beginning of the games, it seems increasingly probable that we will see the sport debut through the high-octane combined-format the world’s athletes have spent the last two year’s developing for.

Amid all of this excitement, confusion and general distress, the question of athlete safety has become a focal point of this year’s competition. Even though one study has shown the relative safety athletes have against permanent heart damage resulting from the virus, the consequences that the world’s population have had to experience over this last year have proven the damage Covid-19 can cause. Variants of concern appear all the more dangerous.

With all of this uncertainty, it has become difficult to know what should happen. To discover some sort of solution, we sat down with Team Italia’s Michael Piccolruaz.

Piccolruaz is special. Not only has the 25-year-old college graduate qualified for the Olympic Games, he has experienced Covid-19 firsthand. In mid-January, he would come home to find his mother feeling under the weather. Piccolruaz would join his brother at their family home, only to find their mother unable to smell the fragrant scent of her candles. At that point, their came cause for concern.

One test later and she would find herself positive for Covid-19. Piccolruaz quarantined with his family. He reflected on the experience. “At that point, I was sure that I would get Covid-19, but I was hoping it would be asymptomatic. Two days later I woke up in the night and I knew I had fever.

“At first you don’t know how long it’s going to last. You hear all of those bad stories about only old people dying from it. Then you hear about the young people that are suffering a lot. You think about it.” With the games only six months away, the additional stress of managing sickness and the potential long-term consequences of the illness began to weigh on him.

Piccolruaz worried about what would happen to him, long-term, but, before long, found himself on the mend. Although he felt well after three days, he refrained from training for two-weeks. He did not want long-lasting damage from the disease and, though it taxed him, he would let it pass.

“All-in-all I was in quarantine for four weeks.” Piccolruaz said that he had trained hard before getting sick and so the abrupt stop really challenged him mentally. “I knew that this is one of the most important years of my career. I was afraid to lose basically everything I had trained up.”

His father works as a mountain guide in Val Gardena, a town in the heart of the Dolomites. Surrounded by world-class rock, Piccolruaz would find himself atop his easiest routes at three years old.

At the age of six, her would join other Val Gardenians to train in the gym. “From there on, I just never stopped.” Upon reflecting on that early-aged training group, he laughed. “To be honest I don’t really know what the purpose was. I was six or seven years old.”

Still, he eventually found himself training for competition. At 14-years-old, Piccolruaz had competed in Italian Regional Cups and national-level competitions. He would compete in his first European Cups.

This international level of competition brought with it another standard of difficulty and began the long-lasting international friendships that he and so many World Cup athletes have come to miss throughout the pandemic.

As he progressed, bouldering would join the European circuit and Piccolruaz would find his strength amid climbing’s competitive disciplines. “In lead cups I made finals, but never podiumed, but in bouldering, I got second in the first European cup. I enjoyed the maximum power of bouldering: just a few moves that were really hard.”

While he progressed into higher level competitions with age, his original love for outdoor climbing never waned. Becoming the place where he might refuel his drive for indoor climbing, Piccolruaz would spend a great deal of time on the rock when not specifically training for competition.

Just a few weeks ago, he would join training partner Jakob Schubert for a weekend in Brionne, Switzerland. Feeling tired on the trip, Piccolruaz felt certain he had lost strength. “I got a bit into a low again, and was not feeling so strong, probably because I was training hard again. I lost a bit of confidence and I thought I wouldn’t be strong anymore.” 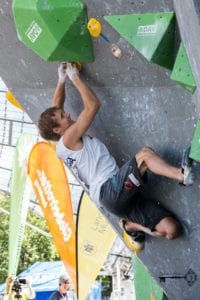 However, the young Italian would win the second Italian Bouldering Cup establishing himself as Italy’s top competition boulderer. This disparity in self-perception and actual performance raises one of the more interesting topics regarding athletes, setting, training and competition.

While World Cup athletes have long compared themselves to one another during national training camps, or through international friendships surrounding some of climbing’s most popular indoor locations, the pandemic has removed the metrestick by which a climber might measure their progression.

This made it difficult for athletes like Piccolruaz to know just how strong or flexible or technical they need to be if the want to perform their best. With all of this uncertainty, the scale of Olympic-level competition, and the excitement the industry feels to see what will come of climbing post-Olympics, this event will mark itself apart from any competition that has come before or will come after.

So how does Piccolruaz feel about the games now that he has walked through the challenges stemming from Covid-19? Should the Olympics continue as scheduled?

“Absolutely. They will try as hard as possible to ensure that nobody gets Covid-19 there. I think by mid-July, a lot of athletes will be vaccinated, and they will take any measures to keep us safe.”