Team Canada’s Tosh Sherkat has resigned from his career with the National Sport Federation. After an 18-year history with climbing, and a nine-year career as a competitor, six of which he spent on youth or adult National Teams, Sherkat has found himself incapable of continuing with the Carbon-heavy nature of professional climbing. Environmental degradation and its impacts on indigenous communities motivated Sherkat to leave Team Canada behind to pursue interests close to home. Below, in his own words, he gives his reasons for his decision.

Out of all of my activities that produce carbon emissions, the routine of high performance competition is the highest. Between traveling to-and-from competitions, traveling to training multiple times per week, food waste and food consumption at competitions and at home (especially the higher consumption of meat products while I am in a training cycle), the yearly routine of vying for a National Team spot is my most consistent and greatest producer of carbon emissions.

After the most recent Intergovernmental Panel on Climate Change (IPCC) report the world and its global north inhabitants have been asked to change. Human activities have been unequivocally linked to the rise in global temperatures.

The decision to resign was not an easy one to make. Those who know me are aware of my international goals: finals at a World Cup in the next five years in both lead and bouldering disciplines and Biographie 5.15a in Ceuse. I’ve been competing since I was thirteen, almost ten years now. In that time I’ve been on the High Performance Squad (then called the National Team) for five years. In that time I’ve won a National Championship. In that time, this sport has given me the power to see myself more clearly, to see what I want out of life, to see what I am capable of, to push what I am capable of. 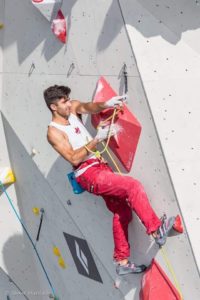 As the weight of the IPCC report came down upon all of us, I felt forced to interrogate my goals. How much do they matter if people are drowning, crops are failing, and the strategy to protect what little is left is just built off the strategy that got us here? As I said, climbing has led me to see myself more clearly. I interrogated what the “international level” was and what it meant to compete there. Glory, it seemed. However, when looked at closer, there’s deception there. Are all nations present? No. Why? Of course some of you will go on about how some nations are more predisposed to playing certain sports because of cultural reasons, etc., like, “Why would anyone in Africa play hockey?” However, what I think is a relevant comparison is the fact that there are huge amounts of people fighting against their government around the world for just the basic necessities while other “unaffected” nations (including nations like Canada) send their athletes to the Olympic Games.

An example close to home is the lack of clean drinking water for upwards of thirty Indigenous communities in our country right now. Another example is that the CEC is paying for Nationals to be held while many people lose their entire livelihoods in the flooding of the Fraser Valley (Stó:lō Nation). Another example is the Canadian government sending militarized police forces into Wet’suwet’en territory to enforce the build of a pipeline rather than sending those same forces and financial aid to assist the people suffering from the floods all around the province of British Columbia.

Similarly, I asked myself, Is Canada a country I want to represent? I understand many of you have different answers for this. One thing I’ve noticed recently was that at the North American Cup Series (NACS) in Kanata, a land acknowledgement was given for the Anishinabek land the gym was built on. This is not metaphoric. Perhaps many of you will know that something close to 90 per cent of Canadian Crown land was seized from Indigenous nations without any treaty. Nearly all of BC lacks treaties entirely. The state of Canada uses the Doctrine of Discovery to claim their lands, the concept of terra nullius, which, by both their own laws and the UN’s UNDRIP report, is illegal. This means that the government of Canada has no claim to the land that they have developed this country upon. I’ll let you read more about this here. So, then, does that mean that representing Canada is representing a settler state that is actively oppressing Indigenous people? When the CEC takes money from the government of Canada and feeds it back into the athletes, is that the same money that could be going towards providing clean drinking water to those communities? Could it be going towards funding the recovery of the thousands of bodies of Indigenous children who were murdered and left in mass graves in Residential “Schools”? 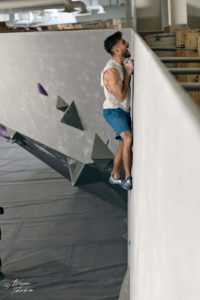 I found resolve by interrogating what the sport of climbing might mean to Canada. Why does any government fund sport? It is a nationalistic enterprise designed to make people patriotic. And I know some of you will say, “Go and do your goals and use your position to stand for what you believe in. Use your athletic platform to inspire change.” We do not need more symbolic action; enough of that from our political leader has been what has gotten us to this point. I remember jumping around my living room like a lunatic when Sidney Crosby scored the Olympic Gold Medal winning goal in 2010. I remember wearing red and white for weeks after. I remember singing the anthem, “…Our home and native land…” —wait.

The Canadian government has actively worked over the last two hundred years to displace, assimilate, and remove Indigenous people—those whose land we are really on, those whose relationships with these lands spans over thousands of years, those who might actually know a real-life real-world solution to the climate catastrophe we face because they’ve been stewards of this specific land for thousands of years—under the guise of the national identity. Go read the Truth and Reconciliation Reports, linked here, for more reading.

Climbing is not apolitical. As much as we like to think that when we head out to the gym or out to the crag we can “tune out” the outside world—we’re still on this land, and this land is not ours as settlers. I resigned from the HPP because I realized that my breaking point, the point in which I realized that the status quo was leading to destruction of our world, had long since passed. We must change. And we will change whether we agree to it or not. Unless carbon emissions are drastically reduced in the next decade, the reality of 2 degree celsius warming will be unavoidable, and the IPCC warns that could mean reaching critical thresholds for agriculture and health. We might still have a couple years of living life “normally,” but those goals I wanted to achieve? There might not be a world stage to compete on in five years. 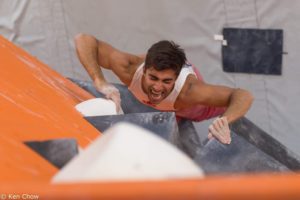 At the rate we’re going, and at the rate at which the governments and corporations around the world are ignoring the crisis, things aren’t looking good. Even at the UN Climate Change Conference (COP26), the event where global leaders were supposed to propose solutions for climate change, their solutions are far too little and far too late. The Canadian government is still trying to push a pipeline through despite the calls from scientists all around the world to keep the oil in the ground; the BC government is still logging old growth forests even though they are massive carbon sinks that might actually aid in exiting this crisis.

All I want is for you to ask yourself how many more heat domes, massive floods, tanker spills, and climate related deaths need to happen before we make real change.