Giant features protrude from the wall as sequences dance before the eyes of the oncoming athletes. They are challenged by the sheer variety of options.

Volume climbing is always difficult to read. With nothing more than a few jibs for the feet, the low-angle shapes create a complicated jigsaw. Setters watch silently as competitors struggle to find their way up the wall.

Can you believe it's already been 2 weeks since #BSO2019 happened…🔥 . . . Photo of @mccollsean on M3 in finals 📸:@blocshop . #blocshop #blocshopopen #dimensionvolumes

Volume climbing is unique. To the newer climber, it may seem like volumes have always been a part of the game, but this isn’t quite the case. Volumes originally existed to change the shape of the wall. They allowed setters to create another dimension of movement that would have previously been impossible to achieve through the use of t-nuts. In the last ten years, the way volumes are used has changed dramatically.

In the 2010 Vienna Bouldering World Cup, volumes existed as described above. They changed the feature of the wall, but the climbing was more focused around bad holds and hard, but easy to read, movements between those bad holds.

Today, any bouldering competition worth its chalk is made of a complicated assortment of wooden and fibreglass volumes. The 2019 Bloc Shop Open Finals exemplifies this concept. Gone are the days of easy-to-read anything. They have been replaced by the challenging delicate style of volume climbing.

What makes this style so challenging is the nature of the angles. Due to the fact that volumes protrude from the wall, they are significantly more positive than a normal smear. As that is the case, they are perfect for creating technical smeary moves that are far more insecure than placing the edge of your climbing shoe on the edge of a dime-sized foothold.

In much the same way, hand holds tend to provide something to pull against, giving the climber direction and power if they are strong enough to use the hold. Conversely, volumes require the climber to not only move with strength, but also balance. As volumes are frequently made without lips, they force the climber to position themselves perfectly so that they may remain on the wall.

As a result, volume base climbing competitions are full-body competitions. Gone are the days where hanging six-millimetre holds is enough to win. For most athletes, success depends on strength as well as a familiarity with moving on the precarious boxes of modern competition.

Dimension Volumes is a company that is leading the way in volume design. Based out of Montreal, Dimension has made volumes for over five years under the supervision of President and Owner Kris Feeney. Feeney has long worked in the climbing industry as a route setter, and has experienced great success as a volume designer.

In 2018 and 2019, Dimension established itself as the official volume supplier for USA Climbing, an incredible accomplishment.

It is with great pleasure that we wanna make another major announcement this week! Dimension Volumes will be an Official Volumes Supplier for USA Climbing for the remainder of the season! #climbing_pictures_of_instagram #dimensionvolumes #routesetting #usaclimbing #bouldering

Though this is undoubtedly impressive, what makes Dimension Volumes so special? To the new climber, all volumes may appear quite similar. Aren’t all volumes just wooden boxes with a few T-nuts screwed in? Perhaps in the past, but no longer. Volumes today are high quality features that can define the climbing-style of a facility. For a gym, the volumes that are bought are important. They are expensive and, ideally, will last a long time. As a result, a lot of thought has to go into modern volume design.

Volumes of the past were rough sorts of things. Splintery, three-panel messes of cheap plywood screwed together by your favourite local. In recent years, volume design as grown into its own art. The designers at Dimension are, in this way, artists. Unlike regular art pieces, these are very much designed to be touched and to endure the trials of time. Gone are the days of splintering panels and poor fitment. Dimension Volumes have standards to uphold.

Feeney describes his volumes materials well, saying, “Our volumes are made of Birch plywood. We also reinforce the angle with fibreglass. To our knowledge, we are the only ones who do that.” Birch plywood, or Russian plywood, differs from the standard stuff as it is made of a greater number of layers. By increasing the number of layers in the wood, the feature is made stiffer and more durable. What’s more, the fibreglass insertion works to support the wood, making it quite difficult to destroy. 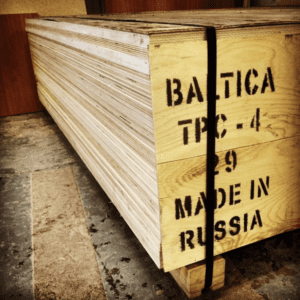 Though the volumes are strong, it takes more than a durability to sell a modern feature. The most important aspect of any volume is the shape. With Feeney’s background in setting, shape design comes easily to Dimension. He recognizes that his volumes must remain modern of they wish to maintain their perceived quality. As a result, Feeney says, “We try to stay close to the routesetters and always listen to their input. We make a great effort to not follow the crowd, but to lead,” instead.

As an example, Feeney references the fact that dual-texture was something that they had been considering since the beginning. Even still it wasn’t until there was a demand that they decided to release their dual-textured shapes. Having a team of individuals present enough to see the trends before they occur is essential to retaining relevance in the ever-expanding climbing industry.

So, how do they come up with these ideas? Feeney says, “It starts with a shape. We then go to the drawing process in the computer and play with the 3D shape.” After a shape has been decided, they make small adjustments to create a family of shapes derived from the original volume.

Following a quick prototype faze, the volumes are complete, but there is still work to be done. Though volumes are becoming more and more popular, North America is still but a tentative user. It is for this reason that Feeney says, “We would love to enter the European market.

As far as we know, the Europeans love volumes no matter the shape or size.” As such, the company recently tripped out to Germany to find a European producer and begin the steps towards expansion.