To climb a route a route on the first attempt, without weighting gear, and without any prior information about the climb.

This last detail is the crux of the issue, but let’s begin with the more easily described elements of this definition. 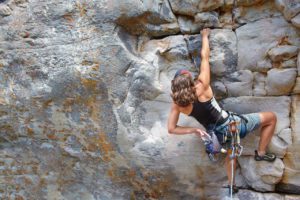 Onsights are specific to rope climbing. The argument for whether an onsight can exist in boulder is another entirely. We will move forward presuming that onsights are rope-specific. Flashing is different from onsighting as you can have prior information about the climb. This is the main reason onsights supposedly can’t exist in boulder. You can see all of the holds with too great a depth for it to be a true onsight.

Climbing a route on your first attempt means that you have never tried any of the moves before. A hilarious technical discussion on the Climbing is Neither podcast describes a situation where a person could preserve their onsight by climbing halfway up the route under their own power, return to the ground, and then try to move back up the climb after they have rested, all without untying, and technically retain their onsight.

Onsights do not require perpetual upward movement. The difference between downclimbing to a rest and downclimbing to the ground is indistinguishable. A person could look past the technicalities of the argument and say that you are now attempting the route a second time as you are trying it from the ground post-down climb.

If a route is described by the line on a rock-face you are hoping to climb, then you are inherently off-route the second you touch the ground. As such, you would lose your onsight by down-climbing to the ground. 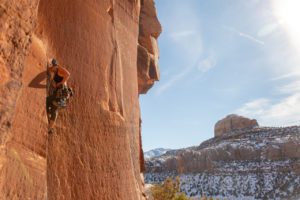 The second part of the definition refers to weighting gear. This is often expressed through falling and hanging on the rope. If you fall while climbing you void the ascent and, by extension, void the onsight. If you weight the rope, or the belayer shorts you in a manner that takes weight off your body, you void the onsight.

Although most people talk about the rope when they cite their definition, it is important to expand this definition to include all gear not worn by the climber. The argument about whether chalk, climbing shoes, knee pads, and other climbing aids detract from the purity of an ascent is another entirely. We will presume, for this argument that all are allowed and restrict our argument the action of climbing.

With that said, this gear includes cams, quickdraws, bolts, bolt hangers, and all other man-made gear placements in this non-exhaustive list. Pulling or stepping on these, voids your onsight.

Finally, the last portion of the definition. Without any prior information is where everyone really dives into the details of what makes something an onsight. Let’s begin by comparing the hard-line definition of this perspective with what is socially accepted. 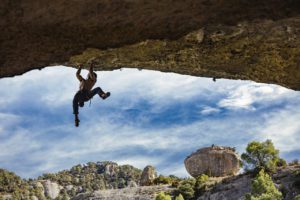 No prior information would mean:

Stefani Dawn breaks down a hard-liner’s approach to pure onsights. She argues that the only true onsight is a first ascent. This first ascent could not come from the developer as they bolted the climb. Bolting the climb provides too much information. As such, given the above, a pure onsight is almost impossible.

In sport climbing, however, bolts and hangers already denote the direction of a climb. It is difficult to argue that quickdraws make any real difference in terms of available information on a sport climb. However, it makes the climb easier. Clipping a draw to a hanger is an extra move that increases the climber’s time-under-tension. Furthermore, if we were to look at traditional climbing we would certainly not consider it an onsight if the climber used pre-placed gear.

In trad climbing, the question of no-prior information becomes even more in-depth when we consider the widths of the gear required to ascend a climb. Do you lose your functional onsight if you are told the widths you’ll need to make the top? Or, perhaps, the quantities of those pieces of gear? 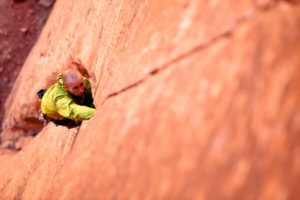 Although this differs from trad climbing, sport climbing is an altogether different discipline.

The final point of interest regarding onsights comes from pre-clipped bolts. Pre-clipped bolts are a smart idea for any outdoor climber as they reduce your risk of decking in the unprotected opening moves. They hold the rope and protect the leader via top rope for the opening sequence. On Just Do It Ondra did this as well, but then the question becomes: Why stop at first bolt? What is the difference between pre-clipping the first and pre-clipping the fifth bolt?

Here, perhaps, we return to the original guideline of rock climbing: risk management. Maybe ethics take a backseat to safety, without tarnishing the functional onsight. This seems at odds with a pure style, but sport climbing is much like bouldering. Both sport and boulder are contrived next to traditional climbing and, perhaps, have their own parameters as a result. When the bolts are already placed, it is hard to argue for route purity.

With bolts in the wall, is an onsight is even possible in sport climbing. Given the absolute parameter no prior information, it at least seems questionable. However, pure onsights raise the level of style of all attempting to climb in that style. Even if you fail to replicate a pure onsight due to the inevitable chalk-stains, maybe the spirit of the onsight is retained by hanging your own quickdraws. Regardless, the bigger question becomes the devaluation of ethics. How far can the rules bend, and, does the modern climbing community even care if they break from these guidelines entirely?