With the Toronto Bouldering World Cup in it’s 3rd year, the event has become an established stop on the circuit, drawing a large field of 59 female competitors. With so many competitors, the women were also divided into 2 heats running simultaneously, and the route setters didn’t hold back and put up problems that challenged and broke up the field.

Noguchi’s team mate Miho Nonaka also looked very strong in the first round. Nonaka finished a solid 4th in Toronto last year, and took her first World Cup Bouldering podium a month later with a second place in Laval, France. It will be interesting to watch Nonaka’s progression this weekend, will the 18 year old from Tokyo be ready to take her first win this year? 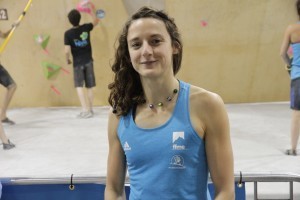 Le Neve attributed her performance to missing the cut for the finals at European championships two weeks ago, “ I had two chances to make finals there, and I didn’t grab them. That was difficult, because of that, I realized I need to be more present, more in the moment. Not think further, so far its working well.” She goes on, “For sure it was a disappointment, but you learn more from failures than wins, somehow. My mental game has been a bit of a weakness for me in the past, I’ve worked on being more relaxed, and trying to find a good balance between being motivated but still relaxed and efficient. Not get stressed out.”

The new approach from Le Neve extends beyond a new mentality, “I’ve tried a new approach this winter, working with a new trainer at a new center in Paris, everything is kind of new, and it takes time when you re-work everything. But I’ve trained super hard this winter.”

Le Neve predicts the semi-finals will be even tougher but not necessarily physically, “It will be tricky, sometimes semis can be harder, others not so much. It might just be difficult to read. For sure it will be designed to cause people to fall, to create a selection, climbing intelligently will be a key.”

Another contender who also missed the European Championships is Shauna Coxsey of the UK. Coxsey finished second in Toronto last year, and was arguably the most consistently strong competitor on the circuit in 2014. Coxsey incurred a an injury just a few weeks before the European championship, and there were some questions marks regarding whether she is at fully recovered, but she dispatched four of the five problems with ease, and only had trouble with the tricky fifth problem, a slab with a large featureless triangular volume that competitors had to negotiate around. 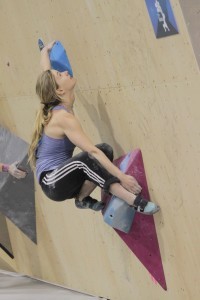 Coxsey was pleased with her qualifying performance, “I am pretty happy with how it went, I wasn’t sure if I was going to be able to compete, due to a fingetr injury.”

Coxsey said it was tough to be sidelined for the European Championship, “It’s one thing to have competed and not make it to the next round, at least you’ve tried and failed to get there. When it’s through injury, it’s difficult. But I had to listen to my body and do what was right at the time for me.”

Asked about her recovery, “I am really happy with how I am considering my finger injury was just a few weeks ago, I am much better than where I thought I would be at this point. But I think everyone here could be fitter and healthier, you never enter a competition at 100%.’

Veteran national team member Stacey Weldon was top Canadian in a solid 23rd, with flashes of problem two and four. Speaking about her performance afterwards, Weldon was satisfied, “it always sucks to come out and not be able to do even the first move, to start the competition that way. But I’ve been working on getting past this sort of thing, not really thinking about the last problem, and moving on. I think I did a pretty good job of that.”

Commenting on the problems she and the rest of the women faced, Weldon said, “they were hard, there were less trickery than I was expecting. The sequences were pretty straight forward, just had to be strong enough. That’s maybe a little bit different from some years.”

For Weldon, a national team member for well over a decade, even longer counting her youth competition career, being top Canadian was a measure of redemption, “I don’t know if I am on top, but It feels good. I didn’t do as well as I wanted at Nationals, I missed finals by one spot, I don’t if that’s ever happened to me before. That made me sad at first, then I got really angry with myself, and trained liked a demon two months, it lit a fire under me.”

Weldon is committed to doing the full season of World Cup Bouldering competition this year, and still feels as motivated as ever. She credits her psyche to being on the CCC Adult Team, “I’ve had my ups and downs with psyche, but the past two years on the team (CCC Adult team) has been huge for my motivation. I haven’t been on a team since I was 19 (when I was last on the youth team). I can train by myself, and have good motivation, but it’s harder. Training with a strong group of girls was really helpful.”

Weldon is hopefull about the current state of the sport in Canada and for the future, “When I started, there would maybe, be like five girls competing, 3 girls in my category. At a national, that might go up to 10. This year was huge, a huge showing at nationals, just the fact that this many girls were psyched to come and compete at this level, it just means the sport is growing.”