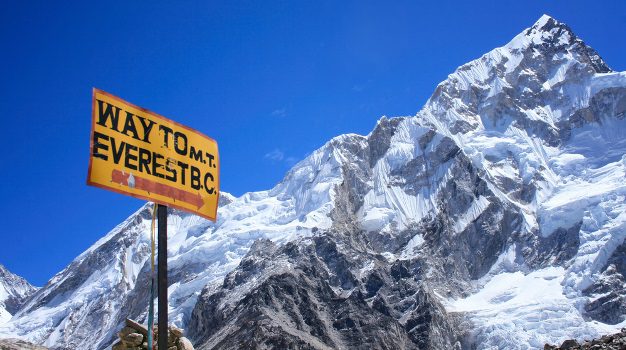 In April and May 2018, experienced British adventurer Neil Laughton will attempt to climb Mount Everest with a team of mountaineers and host the world’s highest black tie dinner party.

In April 2018, the World’s Highest Dinner Party team led by adventurer Neil Laughton will attempt to climb Mount Everest’s North Col (7,020m/23,031ft), where they will set up a dining table, crockery, cutlery, a flower arrangement and Mumm champagne and then cook an exclusive high-altitude menu, designed by Sat Bains, a Michelin two-starred chef.

Expedition leader and entrepreneur Nail Laughton, who has already led five successful expeditions to Mount Everest and summited the mountain in 1998 with Bear Grylls, is renowned for his eccentric adventurous expeditions and for his efforts raising money for charity.

These include paddling a bath across the Solent, playing cricket at the South Pole and flying a car across the Sahara Desert.

This time he plans to travel via Tibet to the North Col of Everest and set a new Guinness World Record for the highest black tie dinner party at 7,100m and dine in style accompanied by a glass of Mumm champagne.

Expedition leader Neil Laughton said, “It is a privilege to be leading another British team on Mount Everest and we are all getting excited about setting a rather eccentric new world record. Most important to me is reaching our £150,000 target for struggling Sherpa communicates after the devastating earthquake in 2015 which we witnessed first hand.”

The purpose of this eccentric British expedition is greater than a world record attempt. Inspired after the tragedy of the 2015 earthquake to help the community surrounding this epic mountain, the team are attempting to raise over £150,000 target for Community Action Nepal, a charity that supports the mountain-dwelling people of Nepal and provides sustainably-driven life-saving aid and life-changing infrastructure.

Heading off today to set the world record for the Highest Dinner Party on Mt Everest. Raising much needed funds for Community Action Nepal to rebuild homes after the earthquake in 2015. Please donate via our expedition website: https://t.co/I9rwdX7RQE Thank you! pic.twitter.com/Jo3nI6q5zO

Funder and Operations Director of Community Action Nepal Doug Scott CBE said, “I wish the Everest Dinner team a trouble-free expedition and a more stable environment that in April 2015! I hope you all return safely and as friends. Thank you all so much for this wonderful support for Community Action Nepal.”

The expedition’s 2015 team were on Mount Everest climbing at 6,400m when the devastating earthquake struck. All members of the team and supporting Sherpa climbers were uninjured and they made their way safely off the mountain.

This year’s attempt on the World’s Highest Diner Party is supported by Mumm Champagne who have championed adventurer Neil Laughton as a member of their prestigious Cordon Rouge Club which celebrates extraordinary people and their daring and victorious adventures.

Louis de Fautereau, Brand Director for Maison Mumm said, “As a member of the Cordon Rouge Club, Neil consistently evokes the #DareWinCelebrate essence of Mumm through his entertaining the courageous expeditions. We raise a glass of Mumm to wish him a successful expedition and bon appétit”.

Neil and his team are acutely aware of the dangers of Everest (he survived two days and nights in the death zone above 26,000ft during the infamous killer storm in 1996) and the safety of the team and Sherpas is their most important consideration.

They will repeat their 2015 route approaching Everest from the northern base camp in Tibet, following the Rongbuk Glacier up to Advance Base Camp at about 6,400m. The dinner will take place at North Col, at 7,020m which is reasonably close to the death zone.

The team will set up the stoves and the table prepare and cook the meal and then service the world record-breaking three-course dinner, toasted with flutes of Mumm champagne.

The dining part will consist of six male members in black tie, two female members dressed in full length dresses and guest VIP is Sirdar Nima Sherpa who was presented with his own dinner suit in 2015. The diners will then set up camp before descending the next morning and will return to the U.K. on May 8.