The week has been a sensation overload. There have been bright-lights, big-screens, loud music and thousands of people applauding this years best mountain culture films. However, it seems the quitter, more intimate events are what everyone’s raving about.

On Friday, Nov 1st, Silvia Vidal presented Alone on Big Walls. Easily the rawest, most exciting show of the week, Vidal left the audience of hundreds speechless. The Catalan big-wall pioneer shocked and awed outdoor enthusiasts from all over the world with her humbled presentation about spending nearly 40-days alone on a big wall in Chile.

Her route named Espiadimonis, dragonfly in Catalan, ascends the Serrania Avalancha wall. Vidal graded the 1,300 metre route A4,6b, until the final 200 metres where the slope angle declines and there is a brief stretch of snow towards the summit, graded at IV+. Climbed in a single push from February 8th through March 10th, 2012, Vidal spent close to two months alone during the entirety of her expedition. Of the total thirty-two days she spent on the wall, sixteen were spent in the portaledge, when bad weather made climbing impossible. The images and video of her patient ascent stunned the audience. One video showed a cascading water fall over her portaledge and down her fixed ropes, it lasted for several days. Vidal said the approach was hard, involving a long trek through dense jungle, and two river crossings. Her images of the leeches and the injuries on her body from the insects and water told the story of how wild the jungle can be. To help her carry gear Vidal hired two other climbers. On the trek in, each of them carried two 25 kg loads, while on the return Vidal made five trips each with loads of 25 kg on her own. She waited days for rivers to calm down to cross them. At the last river the water was too high and she had no options, luckily a group of construction workers used their front-loader and carried her and her haul-bags across. The images of the workers with confused looks on their faces were priceless. The wall itself begins straight out of the lake, so Vidal was forced to carry in an inflatable raft from which she begin the climb, she said “I had never rafted before, so I had to learn that on the way.” Vidal chose her line after viewing photographs of the area taken by Martin Molina in 2007, “I choose it because there is a big roof at 350 m. From the ground that looked good for a wall camp. I knew about rain and that it was dangerous to be too exposed with the portaledge. So, my choice depended on the roofs, for safety. Also, it seemed a nice line. The wall is huge but not always too steep.” 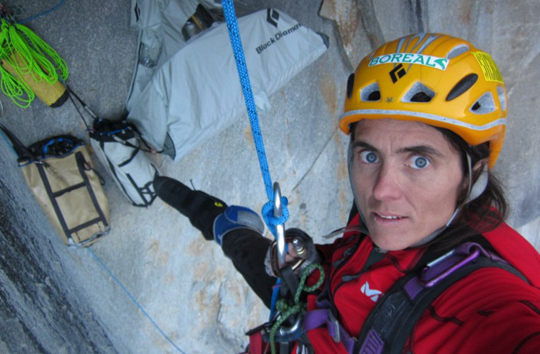 Vidal is known for her ethics when soloing big walls, she never brings any method of communication with the outside world. “If I have a phone or radio, I am not alone, I never bring any form of communication,” she said, “When I am alone on the wall I feel closer to my family and friends than ever before, that is one reason I do it. After the Chile climb it took me one year to recover physically.”

Also worth the visit was Words and Whiskey: A Mountain Reading. It took place in the Kinnear Centre for its second appearance at the film festival. Escorted into the room by bagpipes, the audience sat back and relaxed with a glass of Bowmore Single Malt Scotch Whiskey. The Director of Literary Arts at the Banff Centre, Steven Ross Smith, introduced Jerry Auld and Vivian Demuth who read passages from their books. The event was short and sweet and the stories left everyone wanting more.

The weekend is just starting up. With the Wide Boyz in the house tonight, the John Lauchlan Award presentation, the MEC Mountain Mixer, Cecilie Skog and the Best of the Fest on the agenda before Sunday night. If you are in the area, check out the Banff Mountain Film and Book Festival.