The Banff Mountain Film and Book Festival is heading into day five. The first half of the festival has been fantastic with presentations, films and exhibits from around the world. The Festival began more than 35 years ago in 1976 in the small Rocky Mountain town of Banff, Alberta. A tight-knit group of climbers and outdoor folk looked for an annual event to entertain them during the shoulder season between climbing and skiing. As the story goes, several late night meetings and a few beers later The Banff Festival of Mountaineering Films was born. What began as a one-day festival of climbing films, has now blossomed into a nine-day event in Banff and a year-round film tour which encompasses over 500 screenings on all continents (yes, they go to Antarctica.) Past Festival speakers have included climbing leaders and explorers such as Doug Scott, Reinhold Messner, Sir Edmund Hillary, Catherine Destivelle, Lynn Hill, Bradford Washburn, Göran Kropp, Greg Child, and many, many others. This year is no different. On Friday night climber Silvia Vidal will be presenting Alone on Big Walls.

The festival, along with featuring climbing, features a range of other sports such as kayaing, base-jumping, skiing, biking and so on. The films that have stood out during the last few days are Through Ice and Time and Cascada. Through Ice and Time is a film supported by Parks Canada which captures the wonder of the Columbia Icefield by telling the story of a mans life. The visuals, music and story seize the essence of Jasper Park. The one downfall was the film company was allowed helicopter access to areas often off limits such as the Athabasca river valley. Cascada was a brilliant eight-minute kayaking film by the production company Camp 4 Collective. It was poetry on screen, everything a film should be.

The climbing films have been sub-par this year. The four-minute film on Sonnie Trotter called Castles in the Sky was captivating, but short. Sufferfest by Cedar Wright, about his and Alex Honnold’s quest to climb the 14,000 foot peaks of California powered by road bikes, was OK. The title should have been The 14’ers, I saw very little suffering besides some sore legs and sun burns. The danger of soloing was overplayed, we already know how rad Honnold is, and it is an insult to climbers who actually suffer in the mountains. On the flip side the music and production are great, Honnold is funny and the scenery breath-taking. The film called Sensei is another of the Reel Rock Tour’s flicks which seem to make it into the Banff Film Festival every year. It is the film version of an article Yuji Hirayama wrote for the latest Gripped Magazine issue. Set in Borneo on Mount Kinabalu, Hirayama takes a collection of climbers to send new routes. The film focuses on Daniel Woods who becomes Mr Miyagi’s (Hirayama’s) protege referred to as Daniel Son. Woods impresses the mentor and climbs a new 5.15a while Miyagi sends his 5.14d. If you can look beyond the North Face advertising in the film there is a shred of depth to it, especially while visiting Hirayama’s home town and climbing gym. Josh Dueck, professional skier, was the MC of the Radical Reels on Tuesday night, he gave an excellent show.

It seems that film makers are trying less and less to hide the commercialization of the industry. The money to pay for the high production is necessary, but at what cost? The rest of the week promises more stories, films and conversations. If you are in Banff go check out the Snow Show tonight. 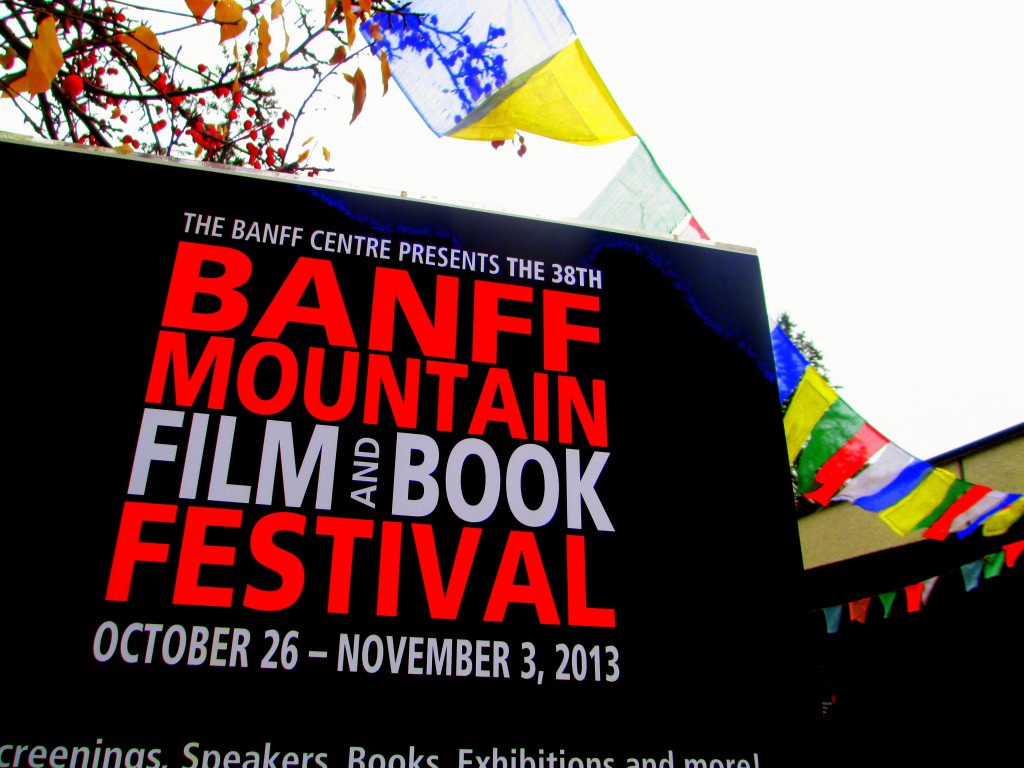