Earlier this week, President Trump issued a proclamation that attempts to dismantle Bears Ears National Monument, replacing it with two much smaller national monuments that are collectively 85 per cent smaller than Bears Ears. He also noted a 50 per cent reduction of Grand Staircase-Escalante National Monuments.

The message from Patagonia, who has been leading the battle to keep Bears Ears, was spread across its website Monday and it was stark and clear: “The President Stole Your Land.” Patagonia said the move was “illegal” and constituted the “largest elimination of protected land in American history.”

"We’ve fought to protect these places since we were founded and now we’ll continue that fight in the courts." —Rose Marcario, President and CEO, @patagonia

Both reductions will affect climbing areas, but more importantly will impact an environmental of cultural and historical significance to native populations. Under the proclamation, 1.1 million acres would lose their national monument status, including world-class climbing areas.

President Trump does not have the legal authority to revoke or modify a National Monument, and many groups in America are preparing to fight to protect protect Bears Ears National Monument.

The Access Fund stated that about 40 per cent of the climbing areas within Bears Ears National Monument would lose their national monument status, including Valley of the Gods, Harts Draw, Lockhart Basin and a portion of the climbing at Indian Creek, like The Cliffs of Insanity, The Wall, and other crags.

“Many sites would be opened up to oil and gas leasing, including areas abutting the world-class climbing at Indian Creek,” noted the Access Fund. “The two new, much smaller monuments that the Trump Administration is attempting to establish—Shash Jáa National Monument and Indian Creek National Monument—are explicitly drawn to allow oil and gas development opportunities.”

They went on to say that “climbing will lose its acknowledged status as a valued and appropriate activity. Access Fund spent hundreds of hours of targeted advocacy to get rock climbing included in the original Bears Ears National Monument proclamation as a valued and appropriate activity. This acknowledgement secured climbers a seat at the table and solid footing during decision making processes that affect management of the national monument. No such acknowledgement exists in Trump’s new proclamation, meaning land managers don’t need to consider climbers’ interests.” 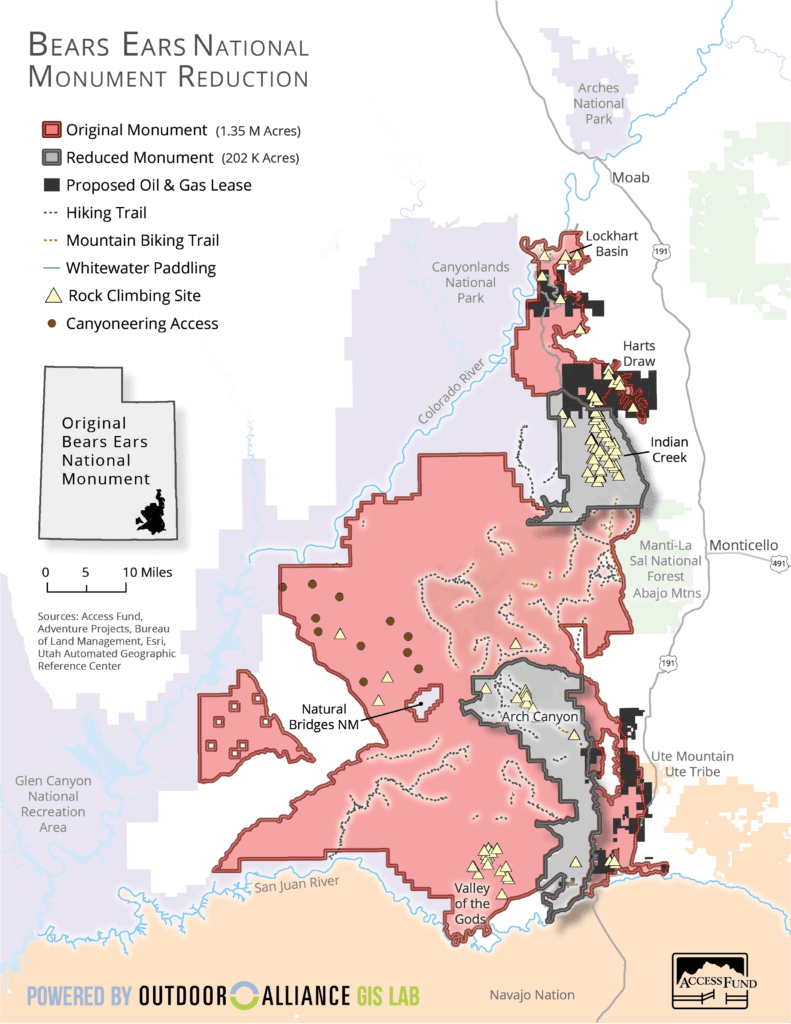 Climb the Hill, an advocacy event, took place on Capitol Hill in Washington, D.C. this spring. Some of the best American climbers met with Congress representatives to talk about public lands. But the efforts by the climbers, outdoor industry leaders, and environmental organisations, the federal government have sent the fate of public lands into uncertain times.

“Whether you live and climb in Utah or on the other side of the country, this fight affects everyone who climbs on our public lands.

Patagonia, which already campaigns to protect land in Argentina and Chile, said it would file a lawsuit against the Trump Administration in partnership with local community and environmental groups.

“Americans have overwhelmingly spoken out against the Trump Administration’s unprecedented attempt to shut down our national monuments,” Patagonia President and CEO Rose Marcario said in a statement. “We’ve fought to protect these places since we were founded and now we’ll continue that fight in the courts.”

Several environmental groups filed a lawsuit hours after Trump’s announcement. Earthjustice, which filed on behalf of 10 groups including the Wilderness Society and the Natural Resources Defense Council, challenges the reduction of the Grand Staircase-Escalante Monument.

A coalition of Native American tribes also said it would sue the Trump Administration over the reduction of the Bears Ears Monument. Visit here to find out how you can do more.

We are suing to protect Bears Ears National Monument, and we need your help. . The time to Act is now. DONATE TODAY >> link in bio. . We need to raise $100,000 by December 15th to help our team protect Bears Ears and our public lands. A generous donor has come forward to match your donations, doubling your contribution to the fight, and we need your help to unlock this matching gift. . Photo by @schirfphoto