Someone posting on the popular climbing website rockclimbing.com claims to have found a cracked bolt hanger on a relatively new sport climb. The author of the post mentions that the hanger was pulled from a route in a granite quarry that received  “water run-off from the top of the crag.”

The author continues to say that two hangers had cracks and that the hanger in the picture “was in place for about six months.” The author also notes that many of the hangers were showing more than expected “tarnishing/rust.”

What’s perhaps more disturbing is that the well known and respected fixed-gear designer Jim Titt believes that the cracking is likely the result of poor quality stainless steel.

“I’ve tested a considerable amount of Chinese made stainless gear over the years from at least eight suppliers; karabiners, chain, maillons, etc and bolt hangers made in Europe but using Chinese stainless steel. On average it all fails at around one third of the expected load and corrodes at an alarming rate. The marked or claimed strengths of the products are pure fiction.

I also sent a 316 marked karabiner for analysis and it was of not made of a recognised grade of stainless steel nor did it achieve the requirements to be classified as stainless.

There have been tests done by the yachting press (the main market for this stuff) with similar results.

The above relates only to mainland China, we have no problems with products sourced from Taiwan as yet.” 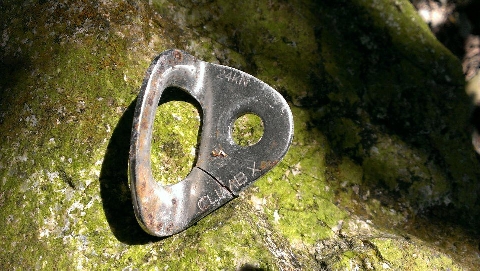