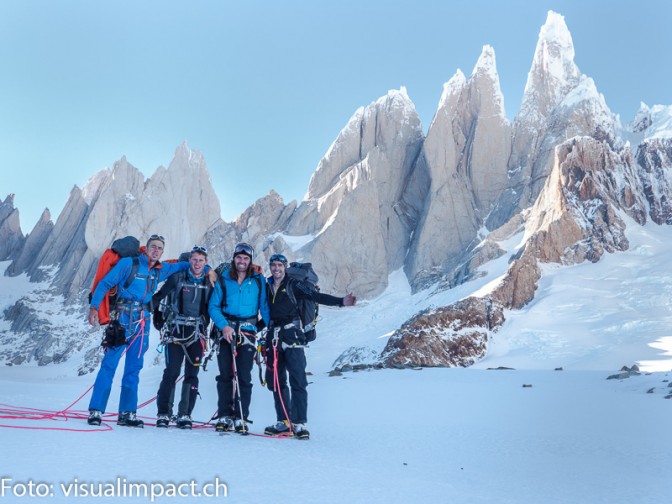 Cerro Torre was first described as the ‘impossible mountain’. And it is still known as one of the most difficult, and most admired mountains in the world. For that reason it has become a popular aim among the ambitious climbers in summertime. In wintertime this is not the case. The last winter ascent of Cerro Torre dates back in 1999.

A team of highly experienced alpinists comprised of Switzerland’s Stephan Siegrist and Dani Arnold, Germany’s Thomas Huber and Argentina’s Matias Villavicencio climbed Via dei Ragni on Cerro Torre, they summited on July 30, in excellent conditions. This is the second known winter ascent of the Ragni after Siegrist’s ascent in 1999, he was with Gregory Crouch, David Fasel and Thomas Ulrich – and the third known winter ascent of Cerro Torre altogether. The first winter ascent of Cerro Torre was carried out in 1985 by the Italians Paolo Caruso, Maurizio Giarolli, Ermanno Salvaterra and Andrea Sarchi who climbed Maestri’s Compressor Route.

Based on their previous experience (Siegrist successfully climbed Cerro Stanhardt in winter 2012 and made the first winter ascent of Torre Egger along with Dani Arnold and Thomas Senf in winter 2010) the team timed its ascent precisely for the end of July. Siegrist commented “It was pitch black, but we had to go. Only beneath El Elmo could we turn our headtorches off. We were in a fairytale landscape of unbelievable ice formations. The Ferrari route was a dream.”

The four climbed efficiently and summited late in the afternoon. While in 1999 Siegrist had not climbed the final 10m rime ice mushroom on top of the summit plateau due to prohibitive conditions, this year conditions were ideal and all four reached the summit proper. Siegrist explained “Last time we did without the circa 10m high rime mushroom due to an incoming storm. At the time it made absolutely no difference to us. But things were different this year: no wind on the summit! We climbed the easy last 10m from the summit plateau onto the highest point. Another unforgettable experience in Patagonia! We’re overjoyed!”

Siegrist, Arnold, Huber and Villavicencio started their descent and reached their previous bivy at 11 p.m. With the weather forecast predicting strong winds they opted to return via Passo Marconi and after a nine hour walk through deep snow and across the Marconi glacier they reached the western end of Lago Eletrico, where they bivied another night. The next morning they contiuned towards El Chalten and were met by Hector and Luis half-way who had brought bread, beer and salami to celebrate. 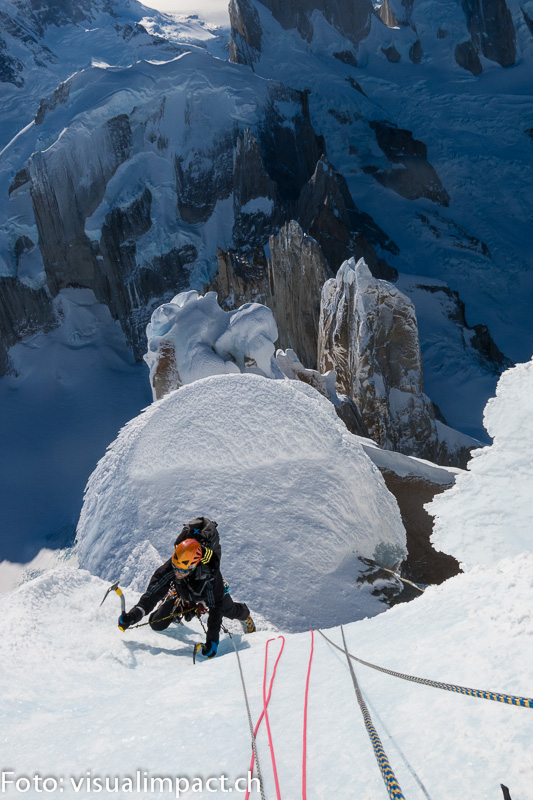 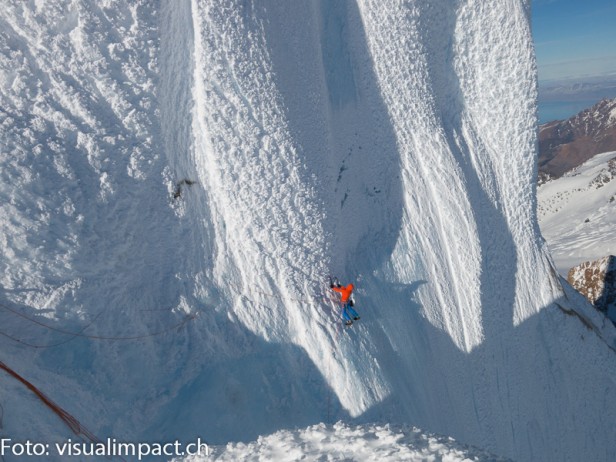