Mount Robson is the highest peak in the Canadian Rockies and its Emperor Face is one of the most talked about walls in the alpine world.

From May 22 to May 24, Canmore-based Niall Hamill and Colorado-based Ryan Richardson teamed up for an attempt on one of the original routes called The Cheesmond/Dick 5.9 A2, which has never been repeated. The following is written by Hamill.

A sharp awakaneing brought my surroundings into perspective. We were nestled into a snowy nook which we had dug out as the sun set the evening prior, at the top of the approach gully that splits the Emperor and Berg glaciers.

Our objective, the looming shape above nearly invisible in the twilight, reflected the stars and sky in its labryinth of ice and rock.

We were about to sink our teeth into one of the grandest alpine faces in North America, both feared and respected, and rarely attempted.

How a couple of young dirtbags such as ourselves had found this path in the first place was largely due to my new friend from Boulder, Co; Ryan Richardson, who’d been up to the lake a few days prior to scope the route and see if we might take a crack at it.

Our enthusiasm for the line was only further magnified by the fact that the original route, first climbed by Dave Cheesmond and Tony Dick some 35 years prior, had been unrepeated, despite a handful of attempts.

We started up the couloir, simul climbing for some ropelengths with a pitch in between. We arrived at the beginning of the real difficulties where the wall steepened into a snowed up groove that Ryan had scoped and had asked specifically to lead.

What appeared to be relatively easy from the belay, turned out to be the crux of the route, where delicate moves were made above scantily placed iron. Our secret weapon, a #2 bird beak was pounded with gusto. As the day drew on, we climbed a total of six “hard” pitches with difficulties up to M6+R AI4+.

Where we could simul-climb we did, making short work of moderate mixed ground up thin ice veins and rock steps connected by solid ice screw belays.

As the sun set on our world Tuesday evening, we found ourselves just a hundred metres short of our intended brew-up spot. Fatigued and needing a rest, we decided to take a seat on the most comfortable place we could find, a chopped out butt ledge on an exposed fin of snow dividing us from the rest of the Emperor Face.

The mountain was quiet for a moment, and Ryan and I were treated to a beautiful show of the Northern lights as we shivered together, more awake than asleep.

I was reminded why I seek these experiences, it’s not just about the objective challenge of climbing; but the whole journey, including the glimpses of raw beauty that are magnified by the intensity of the effort, marooned from everything and everyone but ourselves, the present moment, in that wild place.

The crack of icefall from above snapped me from the waking dream, as the first rays of the sun hit the wall above us, sending down meteor debris into the ice gully that we were about to traverse into the steep exit pitches.

We waited and brewed up as the sun crept around westward, deciding that the traverse would be less of a shooting gallery once the the sun was off the wall.

Once adequately fueled on Soylent powder, a wonder substance that Ryan frequently fuels his alpine climbing with, we set off across the traverse, finding a relatively sheltered belay below the steep exit headwall above.

We were once again heading into unknown ground. Whether Cheesmond/Dick climbed this corner or not we do not know.

We do know however that it was 65 metres long and one of the best alpine pitches we have climbed in the Rockies, an aesthetic ice guilotte, ever narrowing and steepening into a beautiful dihedral above, where steep stemming moves allowed passage through finally, some better quality rock and protection to the convergence with the lower angled ice terrain above.

Once here, we angled further up and away from the plum line, eventually traversing into calf-burning grade 3 ice for some ropelengths to the north face for an afternoon of rappelling into the Emperor glacier, towards our intended descent couloir.

Although we didn’t complete the same original line to the summit ridge as the original ascentionists did, we are pleased to have climbed the line we did, to where we did all free, and onsight.

After fording a thigh deep stream that had swelled it’s parameters since approaching it, we embraced at the summer trail and wolfed down the snacks we had cached with our approach shoes in the bear box.

The 20-kilometre hike out from the Emperor afforded us the time to reflect upon this experience and carry it forth into our lives, with a greater sense of gratitude and respect for each other, the mountain and it’s known history.

Historical note: In 1974 Pat Callis and Jim Kanzler made the first significant attempt at the then-unclimbed Emperor Face, climbing high on the face through a feature they called the “Jaws.” Callis recalls their attempt:

“It was a significant mountaineering experience at the time, involving four bivies, but we did not write it up because we did not go to the summit. We were escaping, having misjudged the nature of the upper wall as being ice. The lower part was great ice, and we did half the face in one and a half days but did not take enough rock gear and food for the rest of it.

“Ours was the first serious attempt, and it was in was in 1974, following two earlier explorations by me with Hank Abrons in ‘72 and Kanzler in ‘73. Also, we invited Jeff Lowe and Mike Weiss to go on another try in ‘75, but after hanging out at the base waiting for weather, we had to give it up.

“Kanzler deserves recognition for realizing the feasibility of the line through the Jaws in ‘74 and talking me into doing it. Although it was the line Abrons and I picked in ‘72, by ‘74 I was thinking of a more conservative route that went left up the snow ramp at the bottom before going directly up.” 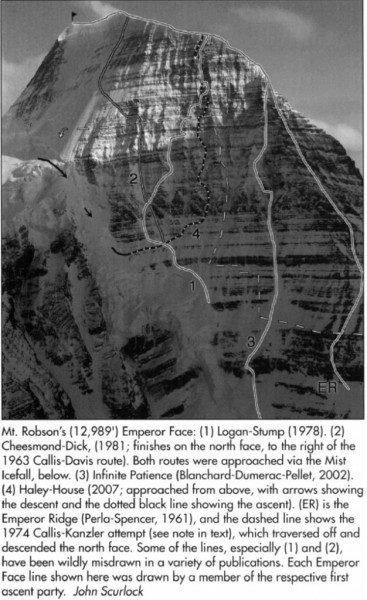