Dozens of news sources that usually do not cover rock climbing are covering the Dawn Wall attempt. The results are almost a priceless collection of comments and quotes that are so out in left field, they’re funny. 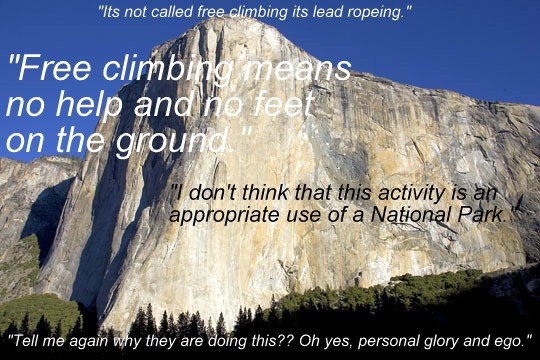 Kelly Cordes summed it up best on a Facebook post on Jan. 4, shortly after the New York Times covered the story. “The comments were entertaining for a bit, and so I scratched together a summary. Now I’ve stopped reading, because the ignorant comments are becoming a bummer.”

The world is watching Tommy Caldwell and Kevin Jorgeson attempt to free climb the Dawn Wall on El Cap. With cold temps in Canada right now, many are tuned-in to what is happening in Yosemite.

What Climbers Have to Say

Gripped’s Brandon Pullan recently had a conversation with Wayne Merry who was on the first ascent of The Nose with Warren Harding and Mr. Merry said, “I am of course awed by the free climbing on El Cap or almost anywhere. I’d be honoured to shake Lynn Hill’s hand for that free Nose climb. I’m a bit perplexed, though, by the process of going back and working on individual pitches prior to doing an all-free ascent. I honestly don’t know what to think of it and I don’t know enough about the Dawn Wall to have an opinion, but it sounds amazing.”

World-renown strongman Sonnie Trotter said on his Facebook, “This is full on Super Bowl Sunday for climbers around the World. Keep up the good fight boys, we’re all rootin for ya.”

The popular soloist Alex Honnold said, “I had the pleasure of visiting Tommy Caldwell and Kevin Jorgeson up on the Dawn Wall. Brett Lowell is up there too, documenting the process while they try to finish the hardest wall in the world. Super inspiring see the climbing in person, makes me want to climb harder! Tommy and Kevin are heroes!!”

The top female climber, Sasha DiGiulian said, “So stoked for Kevin Jorgeson and Tommy Caldwell right now, making history happen one pitch at a time. I believe in you guys go go go!”

What Non-Climbers From Around the Web Have to Say

“Free climbing means no help and no feet on the ground.”
“I don’t get the appeal of this activity either, but then others don’t get the appeal of distance running. Each to his own challenges.”
“Apart from the ropes that they bolt to the rock as they go, and their smartphones, they are alone.”
“The real waste of time is reading all these stupid critical comments by people who could never attempt a feat like this.”
“In 2012, Alex Honnold, another American, scaled The Nose, the most established and much grippier way up El Cap, in two and a half hours.”
“Two thrill seekers in Yosemite National Park are trying to tackle one of the toughest climbs in the world.”
“They were scaling the Dawn Wall — as smooth as alabaster, as steep as the bedroom wall, more than half a mile tall — without the benefit of ropes, other than to catch their falls.”
“First impression- from the blond movie actress in “Singin’ in the Rain”: Gee, this is dumb. No second impression.”
“If, when my son was 20 months old, I had told me wife that I was planning on climbing a half mile cliff without a rope, death by falling would have been the least of my worries.”
“Tell me again why they are doing this?? Oh yes, personal glory and ego.”

“Using ropes and temporary hardware for protection is very chancy and is unlikely to withstand a hard fall.”
“I don’t really understand why people take these kinds of risks. It’s not like firemen going into burning buildings to save people. They are not only risking their lives, but the lives of the crew members….and, for what? I think about all of the rescue workers who get killed trying to save people who take unnecessary risks. It doesn’t sit right with me.”
“They aren’t really taking any risks. It’s like walking up a flight of stairs, or driving a car down a busy freeway. If you have never done those things before, it would be very risky, and possibly high consequence. However, if you spent the past 25 years rock climbing almost every day of your life, doing something like El Capitan is no different than tying your shoes. The risk is almost non-existent. However, just like driving a car down a busy freeway at high speed… while the risk of an accident is relatively low, the consequences are high. For this reason, Tommy and Kevin take every precaution to ensure they are safe.”
“To me, Caldwell and Jorgeson and their support team are worth more than all the hedge fund managers on Wall Street.”
“Two Men Are Attempting The Hardest Rock Climb In The World Using Only Their Hands And Feet.”
“Bolts suck. Leave no trace!”
“Another thrilling exploit from the GoPro bourgeoisie”
“I would appreciate NYT doing an analysis of how such undertakings affect the average tax payer.”
“The ropes can not keep them from falling but may prevent them from falling to the ground.”
“Its not called free climbing its lead ropeing.”

“Why is Captain Kirk climbing a mountain?”
“It’s my fault, I’m getting old, but when I look at these pictures I can’t help but think “these guy’s are out of their minds”. That’s my opinion sitting here in my recliner with a hot cup of coffee.”
“And after they reach the top they will be awarded their gold platinum man cards.”
“Renders me speechless ’cause I’m holding my breath!”
“Why do it in the coldest part of the year?”
“Big whoop. Shatner did it.”
“‘Battling’ Up a Sheer Yosemite Face, Seizing a Dream, Not a Rope.”
“For centuries, adventurers have clinged with their fingertips to the notion of conquering nature and achieving discovery of universe and self – being first. It’s perhaps why humans exist. Humans are not of nature; they’re apart from it. Nature cares not about us. Godspeed to these voyagers.”
“I’d rather use my fingertips to face the dare of mastering Beethoven’s Opus 111 piano sonata. That would be a ‘conquest’, too, and a ‘discovery of self’ as well, though the process might not result in my death (I’m in my 80th year)!”
“This is a mark of the current generation? I’d argue that in 1910, these men would have been going to the North or South Pole (where many people died.) Or in 1500, they might have been crossing the Atlantic. Or in 1969, they might have been going to the moon.”

“In a world bounded only by the limits of the human imagination, those among us so impassioned are able to push themselves to the limits of human capability, in thought, word and deed. The focus, passion, dedication, skill, strength and mental fortitude of climbers such as these equals the efforts of our greatest thinkers, our bravest explorers or our most dedicated doctors.”
“An hour in a car on the Merritt Parkway is more dangerous than an hour of what these gentlemen are doing. Seriously. Climbing is almost always done in ways that make it safer than many things that most people do all the time. Climbing is not an extreme sport, and it is not something that thrill seekers tend to stick with if they try it. It is an art form that requires extreme dedication and discipline, and the story here is of a remarkable achievement, not a death-defying stunt.”
“While greatly admiring the athleticism I wonder about another aspect. Having visited Yosemite many times and seen Rangers, medical helicopters and other park resources used to aid climbers, I wonder what -if any- user fees these guys pay to climb on public lands.”
“As a father of three, I don’t understand how Caldwell with a 20-month old can do this. I assume he has no life insurance because I can’t imagine anyone would insure him and if he dies he will likely leave his wife and child struggling financially for years. And, of course, his son will grow up fatherless. Once you have other people counting on you financially and emotionally, I think you lose some personal freedoms.”
“Whoop de doo.”
“I’m not sure I believe that this is physically possible, unless there is some pitch to the wall at that point. No way a human could do that on a vertical wall. Since the ascent is being filmed, I assume there is video evidence of this feat so we can see how it’s done.”
“And when they fall (they do on occasion), what collective pays for the recovery, the taxpayers. Might as well add the Dawn Wall onto the contract with assets that the current concessionaire has already included for sale. Let El Capitan pay for itself!”
“This is certainly a type of insanity. You had better be ready to die doing this stuff.”
“A little more background and context: … The tip of El Capitan is about 3,000 miles up from the base. Excuse me?”
“I get the aspects of climbing related to the enjoyment of being outdoors in a beautiful place, the amazing views from on high, and being fit. What I don’t get is the need to keep pushing the envelope and endangering one’s life – especially the free climbers.”

“I was acquainted for a time with a Himalayan-class climber. I used to think we shared a similar aesthetic/emotional enjoyment of the wilderness and mountains. Then he wrote a book, and I was disabused of that notion, for the most part.”
“John Branch needs to do a little research on rock climbing before writing such a story. Had he done so, he would know that the phrase “…without the benefit of ropes, other than to catch their falls…” makes no sense.”
“I just have to ask, how do these guys go to the bathroom? And where do the by-products of this function go? Don’t mean to be gross, as my grandchildren would say.”
“Liberals climb mountains. Conservatives strip mine them.”
“‘They will ascend via a couple of hiking trails, for there are far easier ways to get to the top of El Capitan, but none of them are as meaningful.’ Great and gripping story till the last line. Not to take anything away from these climbers, but I beg to differ. The meaning is brought entirely by the body/mind doing the climb, not by the route taken or even the destination.”
“Everytime I think I”ve heard of the most stupid stunt in the world, some other genius come’s up with a stunt like this. Oh wait, I remember, ‘I did it because it was there!’ I hope their families have paid the life insurance premiums.”
“Beats sitting in front of a computer all day pushing papers. Good for them.”
“Good climbes must be like good music: someone has to make it happen so the rest of us can enjoy the experience. I’m hooked, and will be climbing ‘by proxy’ till these guys finish.”
“This is news? Seriously? Philippe Petit in 1974 was news; this rock climb is a narcissistic Guinness Book of World Records stunt, right up there with Eminem’s Rap God (the song features the most words in a hit single) or tallest mohawk haircut or most people hula-hooping (4,483 people for seven minutes). It’s a shame that the view of El Capitan will be marred for days by two people with nothing better to do than days’ worth (‘Worst case is mid-February.’ Seriously?) of ‘look at me’ moments. I hope the Park Service is charging them for this vanity project. P.S. If they fall, and the ropes catch them, do they go all the way back down and start over? I bet not.”
“Sorry, but who really cares? Do something that genuinely makes a difference in the world. This is just the latest non-event. Yawnnnnnnn…”
“I don’t think that this activity is an appropriate use of a National Park.”

Photos From the Dawn Wall: