Central Saanich, BC – After a second day of qualifying in the Lead / Difficulty category, the 26 semi-finalists in each age category have been determined at the International Federation of Sport Climbing (IFSC) 2013 World Youth Climbing Championships that are taking place at the Boulders Climbing Gym in Central Saanich.

The qualifiers include nine Canadian climbers, the highest number of Canadian athletes to reach the World Youth semi-finals in the past five years.

Semi-finals will take place on Monday morning, August 19th beginning at 9:30 am, with finals to follow at 4:30 pm. Key highlights in each age category are provided below:

Youth B Female
Four climbers sit tied for first place after qualifying in the Youth B Female category, including the USA’s Claire Buhrfeind and Margo Hayes. Joining them are Slovenia’s Janja Garnbret and Japan’s Miwa Oba. All four climbers topped their qualifying routes on both Friday and Saturday. In addition to Buhrfeind and Hayes, the USA has three other climbers in the semis for this age group. Two Canadian climbers have qualified including Eva Thompson (24th) and Mika Hosoi (26th). 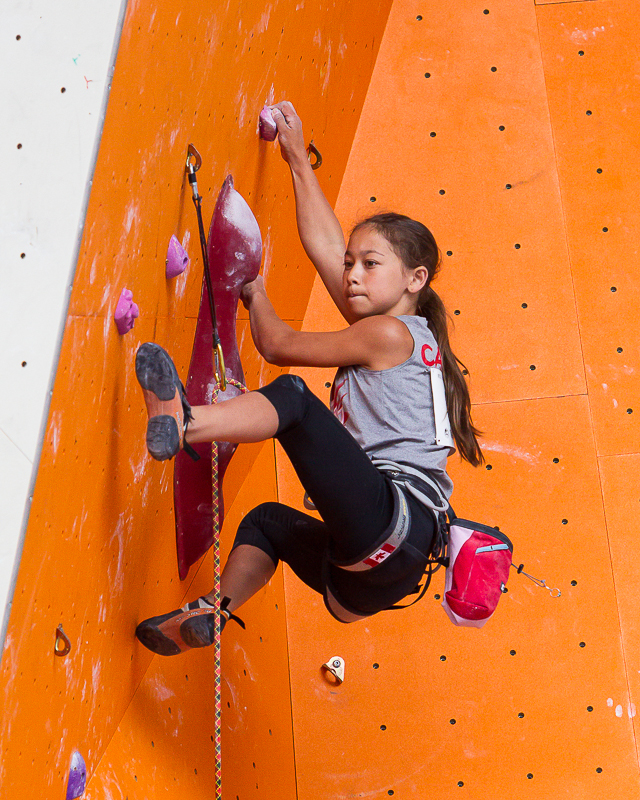 Canada’s Mika Hosoi would climb well enough Saturday to sneak her way into the semi-finals in the 26th and final spot in the Youth B Female category (Photo: Christian J. Stewart / Boulders Media)

Youth B Male
In the Youth B Male category, the USA’s Kai Lightner would effortlessly top his morning route Saturday to assure himself a spot in the semi-final rounds, where he sits tied for first with Switzerland’s Sascha Lehmann, who also topped his route Saturday. France’s Hugo Parmntier will give both a challenge, as he is firmly in third place. Canadian climbers making the top 26 in Youth B Male include Lucas Yuchida (20th) and Kyle Murdoch (26th).

In the Female Youth A category, nothing changed from Friday’s results, as the three climbers who sat tied for first Friday, are tied for first after their second round Saturday, each having reached the top of their qualifying route for the second straight day. This includes Julia Chanourdie of France, Jessica Pilz of Austria and Anak Verhoven of Belgium. Canadian Pia Graham was the top Canadian, finishing just out of the running in 27th place.

Youth A Male
It appears the Japanese will be tough to beat in Youth A Male, as Naoki Shimatani and Keiichiro Korenaga sit in first and second respectively heading into the semi-final rounds. Shimatani topped his route Saturday to jump ahead of Korenaga in the standings. Tied with Korenaga in second place are Austria’s Georg Parma and Sweden’s Hannes Puman, both of whom topped their routes Saturday. Top Canadian was Nathan Smith who finished well back in 35th place. 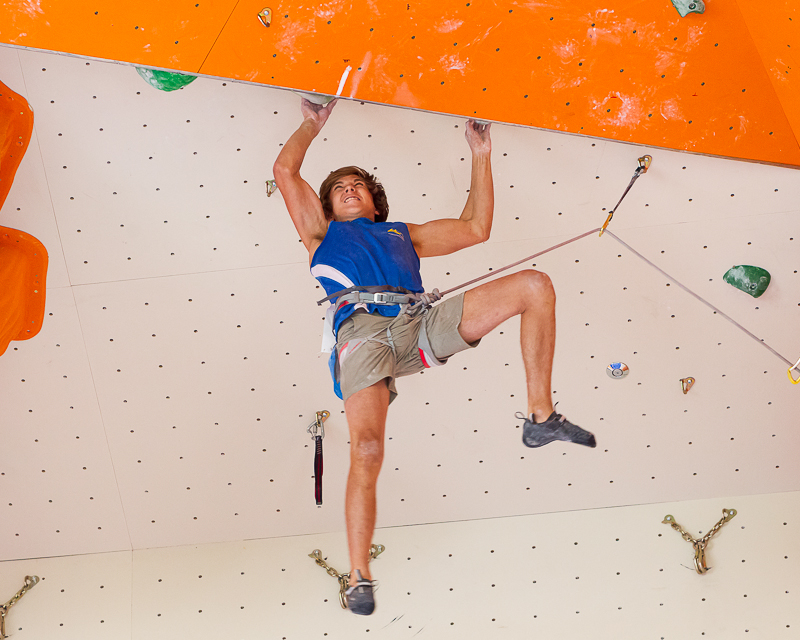 Sweden’s Hannes Puman hangs from the top of the Boulders Gym during his Youth A qualifying run on Saturday. Puman would advance to the semi-finals sitting in second place (Photo: Christian J. Stewart / Boulders Media).

After seeing five climbers reach the top Friday, the Junior Females were shut-out Saturday, as no climber was able to complete their route. Coming closest was Austria’s Magdalena Rock, who with her excellent climb, sits in first place heading into semis. Tied for second are France’s Manon Hily and Japan’s Aya Onoe. Three Canadians placed in the top 26 including Iyma Lamarche (13th), Alyssa Weber (23rd) and Elise Sethna, who just sneaks in tied at 26th.

In the Junior Male category, it appears that France’s Thomas Joannes and Slovenia’s Domen Skofic will battle it out for gold, as both climbers once again topped their routes to sit tied for first. Russia’s Dmitry Fakiryanov also topped his route Saturday to move into third place. Two Canadians have qualified, including Elan Jonas-McRae (15th) and Ryder Hoy (26th). Junior National champion Marc Eveleigh finished just shy of qualification in 27th place.

On Sunday August 18th, Speed Climbing – where athletes make their way up a 15-metre wall in the quickest time possible – will take the stage, with practice rounds beginning at 9:30 am and qualifying beginning at Noon. The final rounds will begin at 4:30 pm and run until complete. The world record in Speed is an astonishing 5.88 seconds (held by an adult) and it is anticipated that many young athletes here will break the 7 second mark.

In addition to the climbing competition, a marketplace is set up at the venue, featuring local foods and crafts for everyone in attendance. This includes a special pancake breakfast offer from the Lion’s Club for $7.00.

Admission to the Speed event Sunday is free, while there is a $5 admission for the semi-finals and finals on Monday.

If you are looking for something different to do this weekend, please come out to support these amazing athletes and learn more about the world of sport climbing.

For more information please head to http://climbtheboulders.com/world-youth-championships/ or to the Boulders Facebook page at www.facebook.com/bouldersclimb

The Boulders Climbing Gym is adjacent to Stelly’s Secondary School in Central Saanich (1627 Stelly’s Cross Road). Free parking is available at the school but will be limited. Additional parking will be available at Centennial Park or Brentwood Bay Elementary, both a ten minute walk from the school.

About the International Federation of Sport Climbing (IFSC)
The International Federation of Sport Climbing (IFSC) was created in 2007 and is a non-governmental international association with a non-profit-making purpose of international interest. The principal purposes of the IFSC are the direction, regulation, promotion, development and furtherance of international climbing competitions (Lead, Speed and Boulder). The IFSC fosters links, networks, and friendly relations among its members, their climbers and officials. The IFSC is recognised by the IOC and is member of ARISF, SportAccord and IWGA. For more details, please visit the IFSC web page at http://www.ifsc-climbing.org