Tom Randall, best known as one of the Wide Boyz, has climbed a new 5.14a (8b+) crack he called Anna Kournikova. The crack is in Valle dell’Orco, in Italy, Europe’s ‘little Yosemite.’

“In the late 2000s, whilst developing new routes in Orco Valley with Pete Whittaker, I came across this mega steep roof next to a waterfall in a small valley called Val Piantonetto. From the road I could see there was a crack in it, but until I walked up to the base I couldn’t see the size of the amazing splitter right through the centre. Oh my God, it was like my own European ‘Cobra Crack’.” says Randall.

The route adds to a short list of burly, single pitch crack climbs including Greenspit, first climbed by Didier Berthod in 2003 on pre-placed gear and then in 2005 by placing his own gear. The route has a 12m crux horizontal roof. In 2008 Nicolas Favresse got the second ascent.

Randall traveled to the USA in 2012, with partner Pete Whitaker, and got the first ascent of the off-width, horizontal roof-crack project, Century Crack, 5.14d. The pair trained specifically for the overhanging route in Randall’s UK basement on a homemade off-width. This year they applied the same training technique to finger cracks.

“After getting really psyched for finger cracks this year, Pete and I had devised a new training program of our usual ridiculous methods. As we emerged from the cellar and into the spring it was time to see if the “pinkies” and “index-monos” were on target, and we booked some trips.”

Despite having climbed Greenspit last season, Anna Kournikova gave Randall a hard time. He climbed the route during a five day trip this June. The climb is a contender for Europe’s hardest crack. 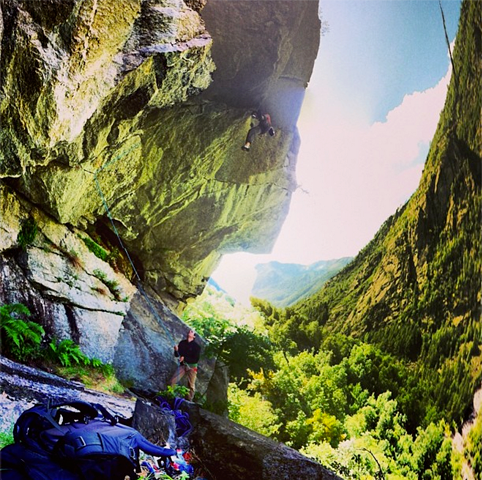 Randall on Anna Kournikova, 5.14a