All eyes are on the 2018 Mount Everest season as the world’s highest peak seems to draw more attention every season.

As teams head to the Nepal and Tibet base camps for their attempts, ice doctors have been busy fixing ropes and setting up ladders.

As heavy rain falls in the lower Khumbu region, conditions are good up high on Everest.

A tea of eight ice fall doctors have opened a route from the base camp to camp one. They’ve spanned 20 aluminium ladders over wide crevasses and up seracs.

With the icefall ropes fixed early, teams can begin to acclimatize early and the ice fall doctors can push to camp two.

Madison Mountaineering wrote on their blog, “Secured an exclusive contract to fix the ropes from camp two to the summit thus by controlling the rope fixing we can control our climbing schedule better than before.”

The ropes used to be fixed by Sherpas from many teams and was consider an honour.

Who are the ice fall doctors? Watch below.

At the Nepal base camp, Everest Link is active, which means everyone can access Wi-Fi for $50 USD for 500 MB.

Above base camp, teams will still need to rely on satellite phones as the signal doesn’t reach very high.

Tsering G. Sherpa, CEO of Everest Link, said his only means of communicating in Nepal before the year 2000 was by written letter.

That year, his mother was diagnosed with breast cancer. While caring for their mother, they lost a year’s worth of business because of inadequate communication.

Technicians had to learn wilderness survival skill and the only option for power is renewable energy.

Everest Link also runs long distance-learning programs in some schools, since few teachers are available in the remote Himalayas.

Expect a lot of social media from the Everest base camp this year. 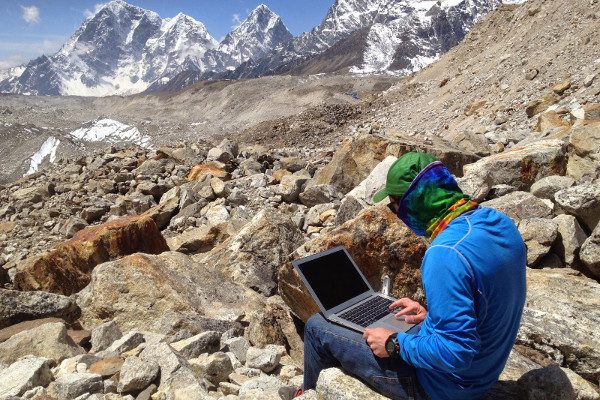