“Climbers will have to bring down 8 kg of extra waste or face legal action as government tackles rubbish mountain in Himalayas.” said tourism ministry official Madhusudan Burlakoti. Everest is an important revenue earner for Nepal, with hundreds climbing during the peak season in April and May.

Go to Everest base camp and return with trash, that is the message being strictly enforced this season. The amount of human waste, oxygen cylinders and climber’s bodies (which do not decompose in the cold) is disgusting. Expeditions will be required to turn in their “collectibles” to an office at the base camp. The office will offer medical aid and mediation services. 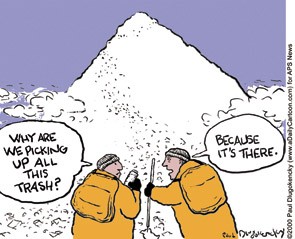 Earlier efforts made expeditions pay a $4,000 deposit, to be returned after they show they brought their waste down, but enforcement was a problem. “Our earlier efforts have not been very effective. This time, if climbers don’t bring back garbage, we will take legal action and penalise them,” Burlakoti said. Old oxygen and cooking gas cylinders, ropes, tents, glasses, beer cans, plastic and even the remains of a helicopter made up 75 artworks commissioned for a Kathmandu exhibition in 2012, displaying the environmental impact of alpine tourism.

In an overhaul of security, the new office at Everest base camp will be staffed by soldiers and police so climbers can approach officers with any problems, officials said last month. Nine Nepali army and police officers will be at base camp on the south side of Everest in 2014. In 2013, a conflict between Sherpas and Jon Griffith, Ueli Steck and Simone Moro, sent climbers and non-climbers scrambling to understand the reason behind the confrontation. “The police will be the state’s representative at the mountain to verify incidents that have to be reported to the authorities,”  Dipendra Poudel, trekking and expedition section officer of Nepal’s Ministry of Culture, Tourism and Civil Aviation, told CNN. “It’s our effort to make mountaineering respectable.”

Climbing fees for foreign climbers have changed, there was some confusion as the whether it would be cheaper or more expensive to buy permits to Everest.  The current rate is $25,000 for individual permits for non-Nepali climbers, but groups of seven pay a total of $70,000. In 2015, group rates will be eliminated and individual permits will cost $11,000.

Source: Alpinist, The Guardian, Outside Magazine