Last month Cory Hall and James Monypenny spent three weeks camped below the northern aspect of an un-attempted 6,160m peak in the Ladakh Range of Northern India. They established two routes, one to the central summit and one to the true summit on the west aspect.

They attempted the main face which is nearly as big and steep as Half Dome. They went light with no bivy gear, no bolts,  and minimal aid gear. They spent a cold night on a small ledge at 5,800m, then retreated.

Shaft of Justice, TD, 85 Degress, 5.8, 610m, FA: Cory Hall, James Moneypenny, August 2013:  Climb steepening ice up the obvious central couloir on the north side of the mountain. Ice becomes quite steep before cornices guarding access to the summit ridge, bypass these on the left. Traverse west across snow slopes about 150m. Climb one pitch of low angle rock, trending slightly right to gain a good ledge, 5.5. From the ledge climb a steep hand crack on the left to a chimney, then step over into a flared crack, that gives access to the central (lower) summit. Rappel off a sling, to the east, then down the way you came.

Hall/Moneypenny, ED, A2+, 640m FA: Cory Hall, James Moneypenny, September 2013: From camp on the glacier, head up and right (west) to gain access over the rock shoulder. Climb lover angles snow, and easy mixed for several hundred metres.  Take the left option of two mixed gullies, and climb a steep pitch to a sheltered rock belay on the left, 70-degree ice leads to the col below the summit tower. Follow the arête to the west for a short pitch on easy rock to a cave belay.  Break out left, aiding up and an obvious flared crack, when it ends traverse left, a good side king-swing gets you to a small belay ledge in a corner. Climb or aide through the flared roof crack, then up to the true summit at 6,160m. Rappel, being careful not to get the rope stuck in the crack, one more rap get you down from the tower. Traverse fourth class terrain along the south side of the peak, and rappel the Shaft of Justice Couloir. 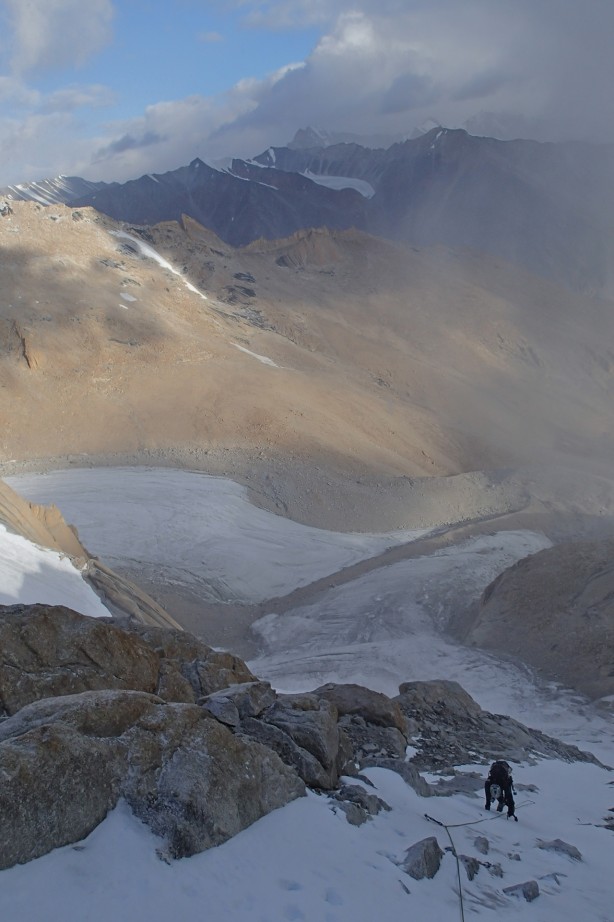