On October 23rd,  Mathieu Détrie, Mathieu Maynadier, Pierre Labbre and Jérôme Para climbed Gauri Sankar, 7, 134 m, in the Rolwaling Hima, Nepal. They reached the summit in the morning. They climbed a new route on the south face, up the second highest peak in the Rolwaling Hima on the border of Nepal and Tibet. The first attempts to climb Gauri Sankar were made in the 1950s and 1960s but weather, avalanches and difficult ice faces defeated all parties. From 1965 until 1979, the mountain was officially closed for climbing. When permission was finally granted in 1979, an American-Nepalese expedition managed to gain the top, via the West Face. The permit from the Nepalese Ministry of Tourism stipulated that the summit could only be reached if an equal number of climbers from both nations were on the summit team. John Roskelley and Dorje Sherpa were the climbers who summitted. Roskelley from his book Last Days: “After 66 pitches on the wall, one of the most difficult climbs I had ever been on, the last move over a rounded bulge proved the worst. I tried stemming to the side. That didn’t work. I found an off-width crack and tried jamming that. No good. Finally, I hugged it like a fat lady’s bottom and shimmied up it. The face was climbed.”

There were two additional ascents made to the main summit of Gauri Sankar. The second ascent was made in the spring of 1984 by Wyman Culbreth and Ang Kami Sherpa, via a new route on a ridge on the southwest face. The third ascent, and the first and only winter ascent, in January 1986, was by South Korean Choi Han-Jo and Ang Kami Sherpa.

Peter Boardman, Tim Leach, Guy Neidhardt, and Pemba Lama made the first ascent of the South Summit on November 8, 1979, via the long, intricate West Ridge.

“Gauri Sankar has deep religious significance for both Hindus and Buddhists. Sankar (the North Summit) is the Hindu god Shiva, married to the goddess Gauri (the South Summit). The Buddhist Rolwaling Sherpas living south of the mountain can only see the South Summit and call it Jomo Tseringma. Throughout Buddhist Lamaism, to as far away as Sikkim, Tseringma is considered the most holy mountain of the Sherpas.” – Sacred Summits by Peter Boardman.

“… the structure of Gaurisankar was very complicated. From the summit, an imposing snow-cap, numerous ridges ran far down towards the valley, hanging from the snow-cap like monstrous tentacles, their steep sides furrowed by deep couloirs. The ridges were like masterpieces of Gothic art – over-full of detail and ornamentation. They were extremely narrow, serrated and cut into deep gaps; no possibility of an ascent there. On the whole face there was not one ledge where a camp could be placed, nor was there any sign of that “friendly glacier” that was to have led us easily upward. If the great mountain had been less perfect in its beauty and strength, it might perhaps have left us a little hope.” – Raymond Lambert and Claude Kogan: White Fury – Gaurisanker and Cho Oyu. 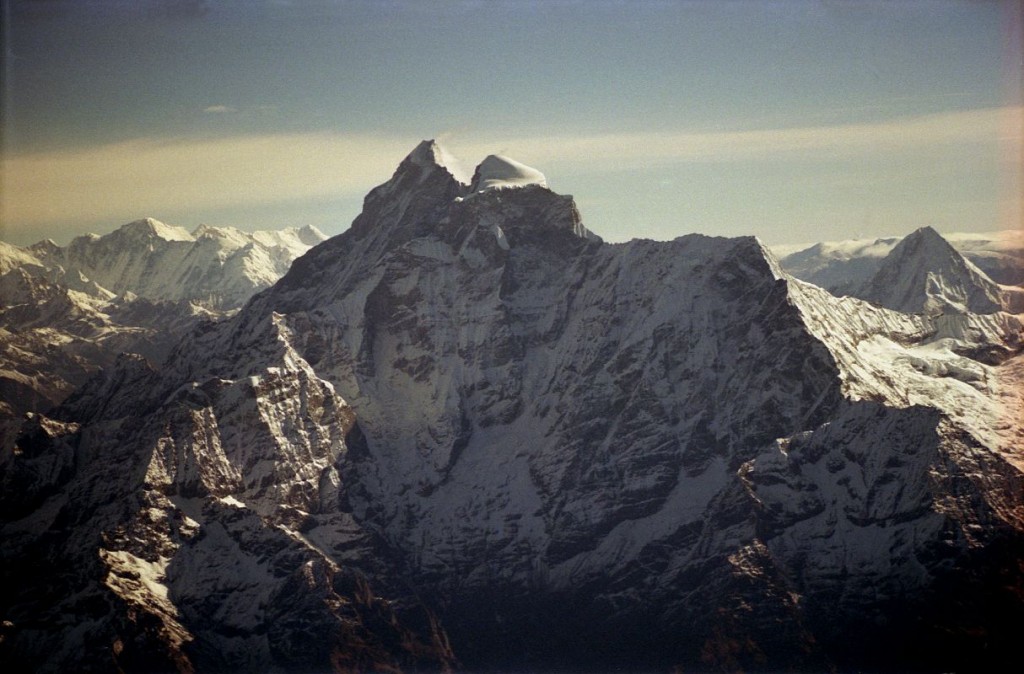