The spring alpine season in the Rockies is in full swing as parties head up classic routes.

On Mount Kitchener, the Grand Central Couloir is a rising esthetic line the splits the north face.

Over the past week, a number of parties have climbed the big V AI4 M6, including John Price and Kris Irwin through the night on May 20.

The climb is a big, objectively hazardous alpine climb that can be safely done by waiting until the cornice has fallen and for cold weather (or by climbing at night) to avoid rockfall.

The upper gully contains some very difficult and serious climbing. Bivy sites are extremely scarce and the climb is almost always done in a push.

The first ascent was by Mike Weis and Jeff Lowe in August 1974 and a variation to the crux was later climbed by Barry Blanchard and Kevin Doyle.

The Grand Central Couloir was done about the same time as the Super Couloir on Mont Blanc du Tacul and The Maclntyre/Colton Route on the Walker Spur of the Grand jorasses in the Alps.

Amazing night spent on Mt Kitcheners ‘Grand Central Couloir’ with @rockiesalpineguide , due to time constraints we reversed the alpine start and decided to climb the route at night. Unforgettable experience, climbing high onto a north face at night, something I had not felt before. 👌

Together, these climbs represented a high-mountain extension of skills gained on steep waterfall ice using curved picks that had, by then, been in use for five or six years.

The Grand Central Couloir is only in condition a few weeks every year and this year at least two or three parties are taking advantage of the great conditions. 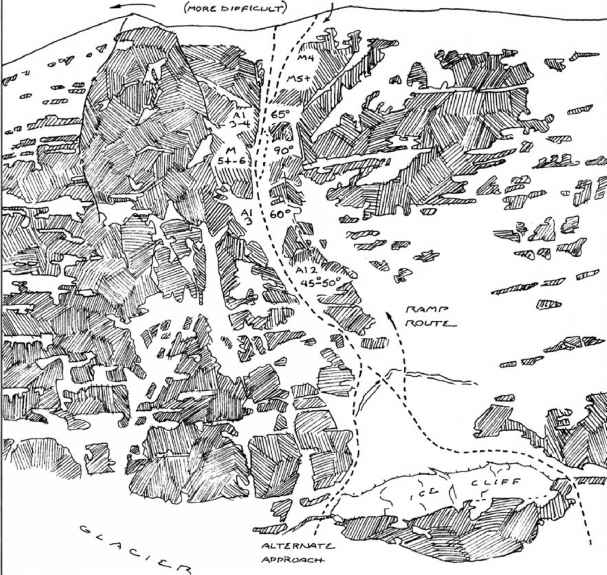