The opening Men’s qualifying round of the second annual IFSC World Cup Bouldering Toronto, saw some of the best competition climbers in the world and across Canada do battle, with some great action and drama as a result.

True to World Cup style the problems were difficult to read and emphasize technical abilities. But true to the North American style, Head setter Chris Danielson and his team devised a set of five problems that tested competitors’ physical strength as well.

As expected Sean McColl lead the Canadian men, qualifying in second, behind Rustam Gelmanov of Russia. But the standout performance of the team goes to Jason Holowach, owner of Grip-it climbing gym in Saskatoon. Holowach topped 4 out of 5 problems, beating out some big names in the process, such as Jorg Verhoeven of the Netherland, the silver medalist in last year’s event. Holowach cruises into the semi-finals in 13th place. Asked about his thoughts for the semis, Holowach confidently stated, “ I am going to aim for a top ten now”.

Eric Sethna of Canmore also put in a noteworthy performance. Sethna topped two of the five problems and finished in 23rd place, a fine result. But he came agonizingly close to the top on problem 4, the steepest problem featuring powerful opening moves. After sailing through the powerful lower moves, Sethna slipped at the top of the delicate headwall, just as he was about to match the finish, a move that would have vaulted him into the semi. Speaking afterwards, Sethna called the qualifiers, “the hardest round I’ve ever been through, I am so tired, I’ve never been this tired after a round.”

A future name to watch for will be Lucas Uchida.  Only 16 and having competed for only three years, Uchida finished in a solid 26th in his World Cup debut, ahead of quite a few veterans of the team.  Asked about the opportunity to debut at his home world cup, Uchida replied, “I am pretty psyched, this is a really rare experience and I am pretty grateful for the opportunity, especially in my first year (of eligiablity)” 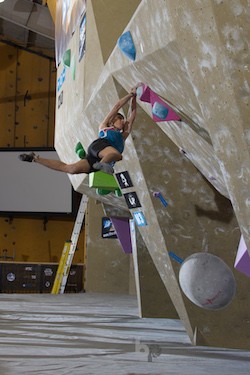 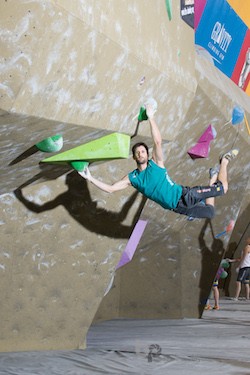