After a 15 hour flight, we arrived in South Korea. I was travelling with fellow North American Marc Beverly and it seemed that we were off to a solid start.  Unfortunately, our optimism was short lived as our ride didn’t show up. We were suddenly stranded in a strange land. Luckily, our friends that had arrived ahead of us had left a message with directions to where they were staying. So, we gathered our stuff and headed to their hotel.

We were in the cab for an hour, weaving in and out of traffic, and the fare meter in was getting out of control. When the driver finally found the hotel, our bill was $120. Later that night, our friends Malcom and Lukasz told us that cab drivers like to hustle foreigners. We had just been screwed for $120. Perfect.

All we could do now was get some rest. It wasn’t the most ideal of situations with four of us in a tiny room, but we made it work.

We were 15 hours ahead of our local time in North America and the time change was affecting all of us. Unable to sleep and after stalling as long as possible, we got up and began our day of being tourists.

Walking through the streets of Seoul is like nothing I’ve ever experienced. There are millions of people on the streets and scooters were weaving through traffic. It was overwhelming.

We spotted a Starbucks and after enjoying a nice caramel macchiato, the four of us ventured into the market. It consisted of buildings connected by structural coverings, dark alleyways and tiny stores with low ceilings. The streets were filled with vendors selling everything from dried fish, pig snouts, weird looking meat to knock-offs of Western brands. We couldn’t figure out how they could all make money and survive.

Our plan was to rent a car but the rental dealer said we couldn’t drive, as we didn’t have an international license. No amount of pleading could change his mind so we headed back to the hotel, happy to move into our newly upgraded room. We opened the door to the new space and found no beds. Despite this slight set-back, we hunkered down for the night, lying on blankets, side-by-side like sardines.

Once again, we were up way too early. We packed up the bags and headed to the International Youth Hostel to meet up with the other athletes. The game plan was to hop on a bus and drive for five hours to the world cup venue in Cheong Song. On a side note-taxi drivers in South Korea are flippin’ crazy.  I thought rally drivers were nuts, but put any South Korean taxi driver in a rally race – with a taxicab- and they’d win hands down.

I’ve never been a big fan of traveling by bus. The seats are often uncomfortable and if you fall asleep, you wake up feeling like you’re paralyzed from the neck down. Although not thrilled about the bus ride, hanging with all the athletes was great. During the trip, the bus would get sprayed at various spray stations on the highway. These stations would wash all the vehicles hoping to prevent any sort of disease from entering that particular area. Weird.

Pulling up to the athlete hotel in Cheong Song is something I’ll never forget. As we stepped off the bus, we were swarmed by media. Because this was the first ice climbing world cup in Asia, it was a very big deal to the locals.  Everyone was keen to talk with us and take our pictures. We were about to make climbing history as part of the first Asian ice-climbing world cup event.

In the evening, the athletes were presented by an outstanding opening ceremony at the Cheong Song community centre. We saw cultural dancing, a parade, speeches by the alpine federation and the mayor – it was incredible. 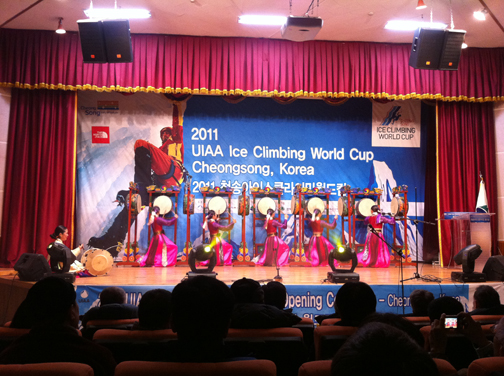 Oh, and our fancy hotel still didn’t have any beds. Three more nights without a bed. At least our floor was heated. There’s always a bright side.

Game day. Arriving at the venue, we were in awe of the towering spire smeared with ice that guarded a space-ship looking event structure. We didn’t get to look for long as all the athletes were escorted to isolation. 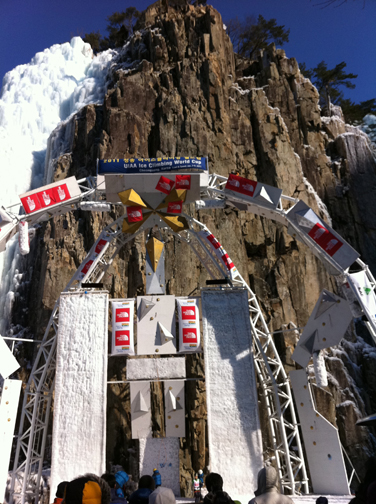 Isolation can be an intimidating place. It’s important to stay focused and to rely on what you know, how you’ve trained and how you’ve prepared.

“Gordon McArthur, you’re next”. Hearing those words naturally made my body swell. Suddenly my relaxed state was replaced with excitement. I walked up to the first route and standing beneath this behemoth of a structure I felt like I was about to fly.

The clock started and I was on my way.  I was pulling down hard, taking no rests, cruising through the first few moves. Suddenly I found myself falling. My tool had ripped through a sinker hold. It shouldn’t have happened as the drilled pockets are supposed to be bomber. But my pocket wasn’t. I was lowered to the ground. It was over.

Everything was going right, until it all went wrong. Could it have gone differently? Of course. But I needed to accept how it actually went and then try to re-group. I felt like I let people down. This was a hard pill to swallow. Thank goodness for friends with all their supportive words.

Waking up the next day, I was faced with a decision: Am I going to let what happened yesterday taint the rest of this trip, or will I use it as learning experience for my next comp. I decided to snap out of my poor-me mindset and be there for those who had qualified for the semi finals. We went to the comp ready to cheer-on the competitors.

I learned a lot from watching some of the strongest climbers on the planet; how to sharpen your picks and crampons, what gloves to wear, dipping your hands in chalk before you put on your gloves and climbing movement.

When the dust had settled, there were only eight men and eight women in the finals. With my new attitude, I enjoyed watching the best climbers cranking down on the wildest structure I’d ever seen. The men and women were crushing moves I thought were impossible. On the men’s side it came down to the wire: both Marcus Bendler and Park Hee Young had reached the final hold but ran out of time and were unable to clip the chains. On the women’s side, Angelika Rainer was cruising the route and her speed and elegant movement foreshadowed an almost certain win. 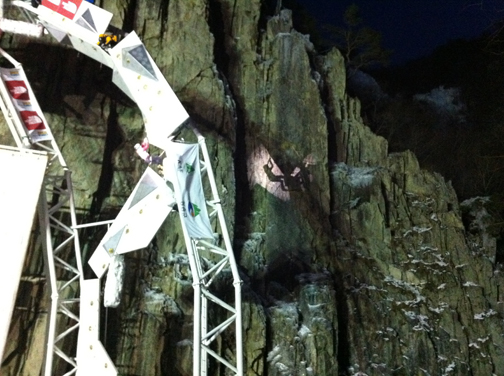 Suddenly the crowd was in an uproar. The belayers were abruptly pulling Rainer off the route. She didn’t know what was happening so she tried to keep climbing, but with taught rope she fell off. She was obviously unhappy and became even more upset when she found out that the judges had made a mistake by pulling her off.

There was a discrepancy over whether she had missed clipping one of the quick draws, but it turned out the judges had made a mistake. Because of this judging error, Rainer was allowed another attempt.

Rainer of course tried again, but half way up the route a hold broke. She was offered  another chance to climb the route but by that time she was freezing and exhausted. She had just been robbed of what could have been a world cup win.

Now the judges came out to announce the winner of the men’s lead final.  Everyone was excited because of the close finish between Bendler and Young. “And the winner of the men’s lead final is Marcuuuussssssss Bendleerrrrrrrrr”.  Right away we rushed Marcus, congratulating him as he just won the first Asian world cup of mixed climbing. Watching him climb, understanding his movement and decision making, and then congratulating him in person was opportunity of a life time.

Back at the hotel, during the athlete dinner, and after several beer-chugging bouts, we discussed the what had happened at the comp. We all agreed that in comps, some things are in your control and some things are not. You take the good with the bad, the lucky with the unlucky and you keep on trucking.