Canmore-based climber Carlyle Norman was killed while attempting a route in Patagonia. The initial reports suggested that she had been struck by rockfall and that her partner Cian Brinker had managed to escape off the route. Reports of the accident continued to trickle in but details were difficult attain until today, when Norman’s family and friends released an official statement.

The document explains that on Sunday, January 15, Norman and Brinker were climbing Last Gringo Standing, a thirteen pitch 5.11, on Aguja Saint-Exupéry, a 2558 m peak on the Fitzroy Massif. The team was one pitch from the false summit when Norman was struck by rockfall and sustained serious head injuries. Brinker remained with Norman, who was unconscious, for about two hours before deciding to descend and get help.

The next day, a Red Bull helicopter took a team of climbers up to assess the situation. Although they spotted Norman on the ledge the helicopter was unable to land.

On Tuesday, January 17, the Red Bull helicopter took a small group of elite climbers that included Rolando Garibotti and Colin Haley to the base of Saint-Exupéry. The plan was for the team to climb an adjacent route in hopes of reaching the position of the possibly fatally injured Norman. The team climbed all day and into the early evening but had to halt their heroic attempt due to rapidly deteriorating weather.

Carlyle Norman was well respected member of the close-knit Canmore climbing community and with Brinker had won the 2011 John Lauchlan Memorial Award. They were in Patagonia to complete a new route on Aguja Bifida. 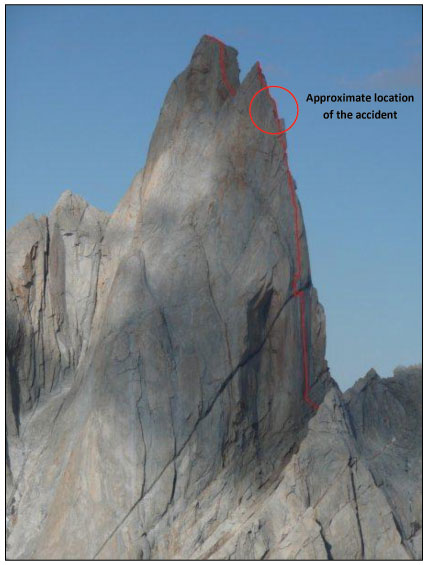