The folks at Petzl, Black Diamond and Mammut have been showing some impressive new climbing hardware at the recent European trade show. The biggest news for most climbers will be Petzl’s introduction of a new GriGri, which has remained virtually unchanged since it was introduced 20 years ago. The GriGri 2 is now 20 percent smaller, 25 percent lighter and compatible with ropes ranging from 8.9mm to 11mm in diameter. The device also offers a new progressive descent control system, which should make lowering and rappelling even smoother. For climbers who prefer climbing with half ropes or want a lighter belay device, Petzl releases the Universo belay system. Consisting of a Verso belay device, an Attache 3D carabiner and a sliding connector piece, the Universo belay system provides smooth belaying and rappelling while the connector prevents dropped belay devices on multipich climbs.

Black Diamond is introducing a new belay carabiner. The innovative GridLock Screwgate secures the belay loop in the bottom of the biner preventing any unexpected shifting or cross loading during belays or rappels. A large rope-friendly cross-section ensures the GridLock Screwgate works smoothly with most belay devices and the hot-forged construction keeps the overall weight down to a very respectable 76g.

Mammut has updated its innovative Smart belay device. Originally conceived as a single-rope, non-mechanical, semi-auto-locking belay device, the new Smart now compatible with single, half and twin ropes and also works as a auto-block on multi pitch routes allowing the safe belay of one or two seconding climbers. 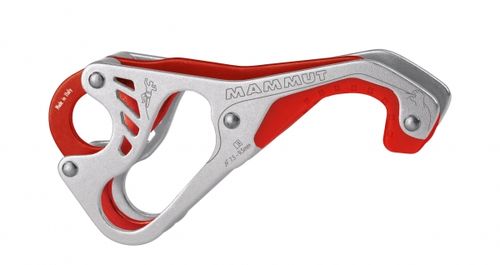 More details as they become available.