This week it is the Youth B boys.  The team looks strong and I think all of these athletes have a shot at taking home the top prize. 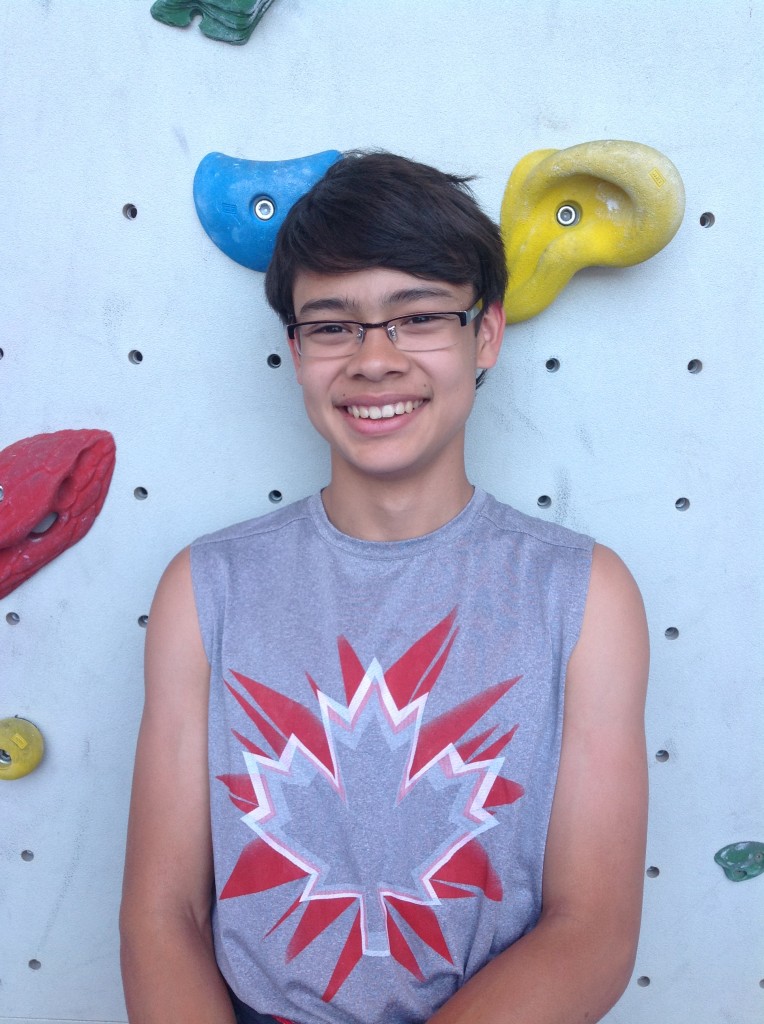 This is Lucas’ first year on the National Team. He competes in the difficulty discipline and his home gym is Boulderz Climbing Centre in Ontario. He trains for 12-13 hours, four days a week. Before the event Lucas eats rice, eggs and some sort of fruit and then as a warm-up he does one minute of a jazz-run, 25 jumping jacks and five push-ups and repeats this three times.
He placed first in the 2013 Youth National Championship and ranked first at Canada’s Youth Cup, “I am psyched about challenging myself on world level routes. To represent Canada on Canadian soil, it feel great. I am looking forward to competing against climbers from different countries,” said Uchida.
Kyle Murdoch 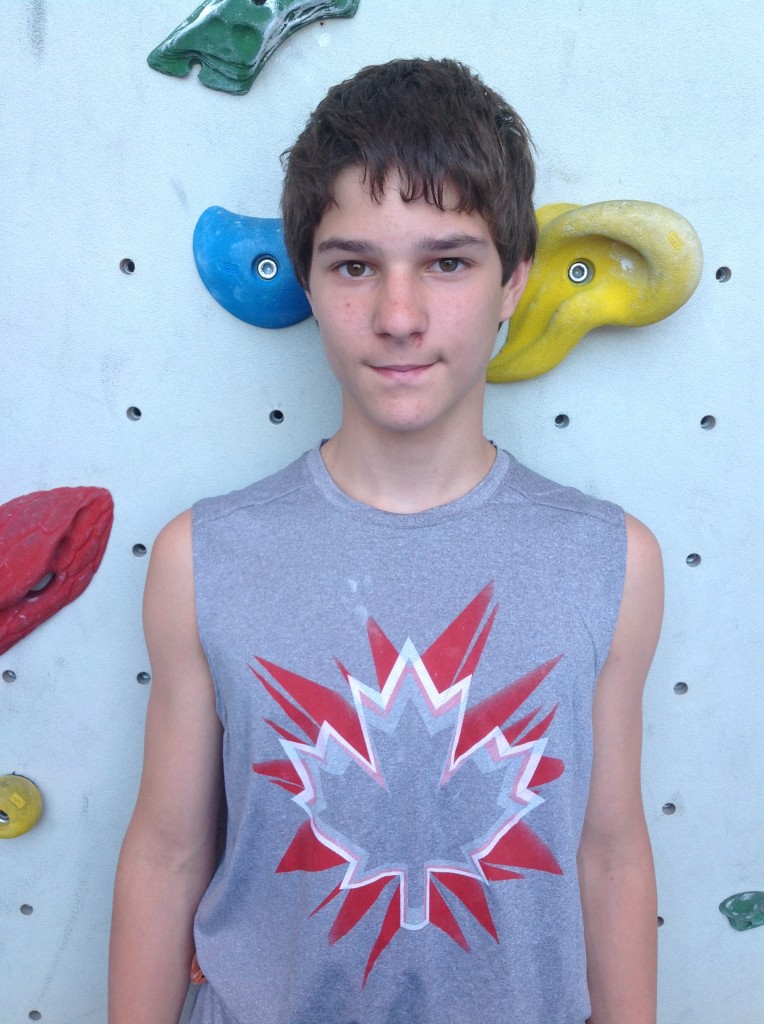 This is Kyle’s first year on the team and has been training for five years, he is based at The Hive climbing gym in BC. He will be competing in the difficulty discipline and trains 12 to 15 hours a week over four days. Before the main event he likes to keep his min occupied the day before by either watching a movie or hanging out with friends. At the 2013 Youth National’s and Youth Cup he placed second. He has competed in bouldering comps in the US, “I am seeing Youth Championships like an adventure with new challenges, I look forward to competing against the rest of the world,” said Kyle.
Ben Hughes 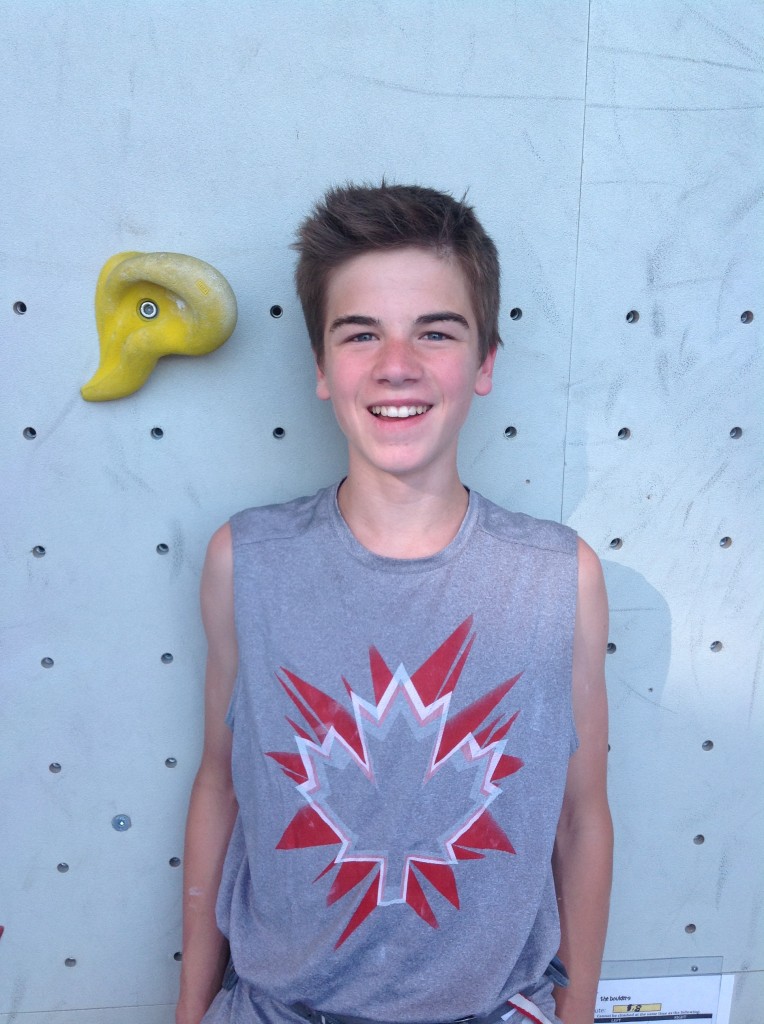 This is Ben’s first year on the National Team and is based at The Hive in BC, he is competing in the difficulty discipline. He trains about 12 hours a week, four days indoors and two days outdoors. During the summer he trains for 20 plus hours a week and says before an event he focuses on visualizing the competition. He ranked third at the Youth Cup and Youth National’s this year. This will be my first Youth World Climbing Championships and I am super excited. “It will be more special as it will be the first World Championships that have been held in Canada. I can’t wait to compete against some of the best climbers in the world on our home wall,” said Ben.
Simon Yamamoto 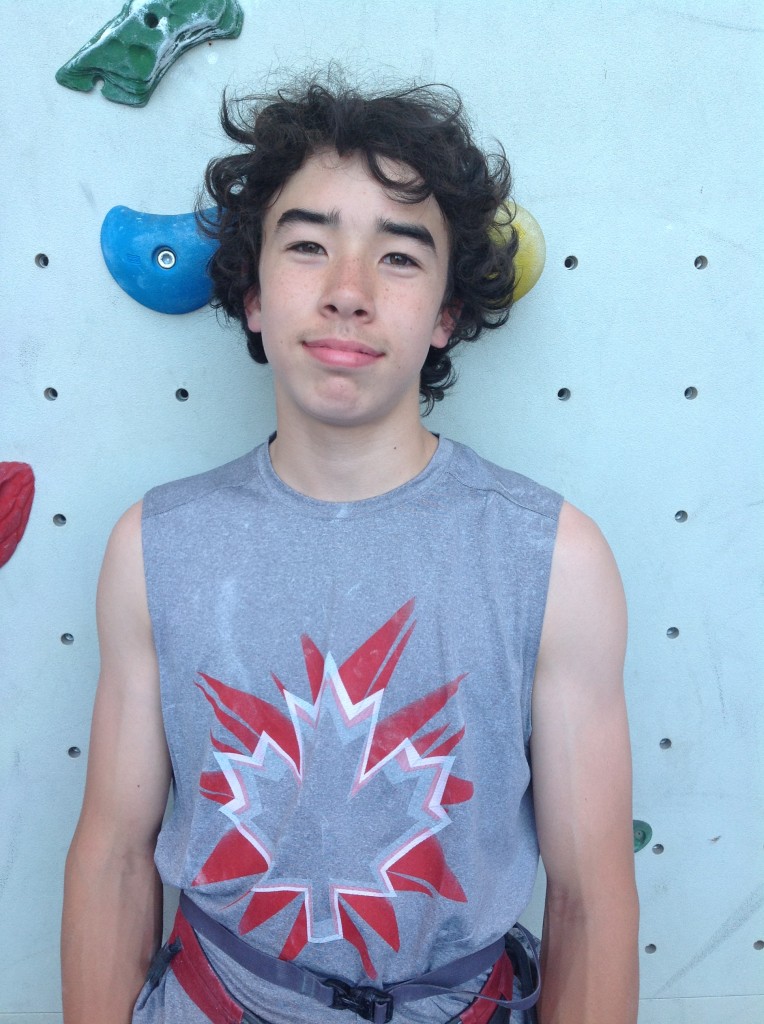 Simon has been training for six years and this is his first Youth Championship, he is based in Canmore and will be competing in the difficulty discipline. He trains for about 10 hours a week and before a competition eats pasta and focuses on the fun he will be having.  At the Youth National’s and Youth Cup he placed fourth, “I am happy to be on the National Team because I have trained hard to get here. I have accomplished my goal and am proud to represent Canada,” said Simon.
Tosh Sherkat 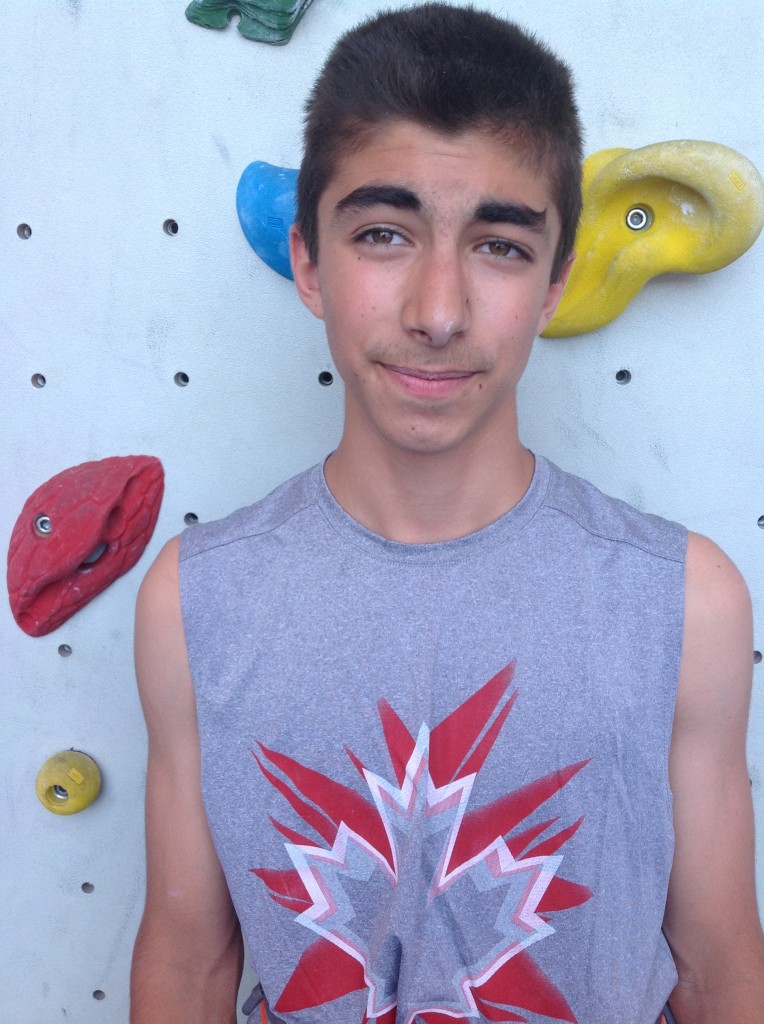 This is Tosh’s first year on the National Team and has been training for nearly three years. He will be competing in the difficulty discipline. He trains for 12 hours a week over five days. He spends much of his time running power endurance drills as he finds them effective.  At the Youth National’s he placed fifth, “this is a great opportunity to learn and gain experience to be a better climber,” said Tosh.
For more information on our coverage of the Youth Team:
http://gripped.com/2013/07/sections/news/canadian-junior-team-weekly-report-1/
For more information on the Youth Championship:
http://climbtheboulders.com/world-youth-championships/
A big thanks to Dung Nguyen, Chris Neve and the rest of the Junior Team coaches for the excellent job they are doing with the team and getting us this information to share with you.